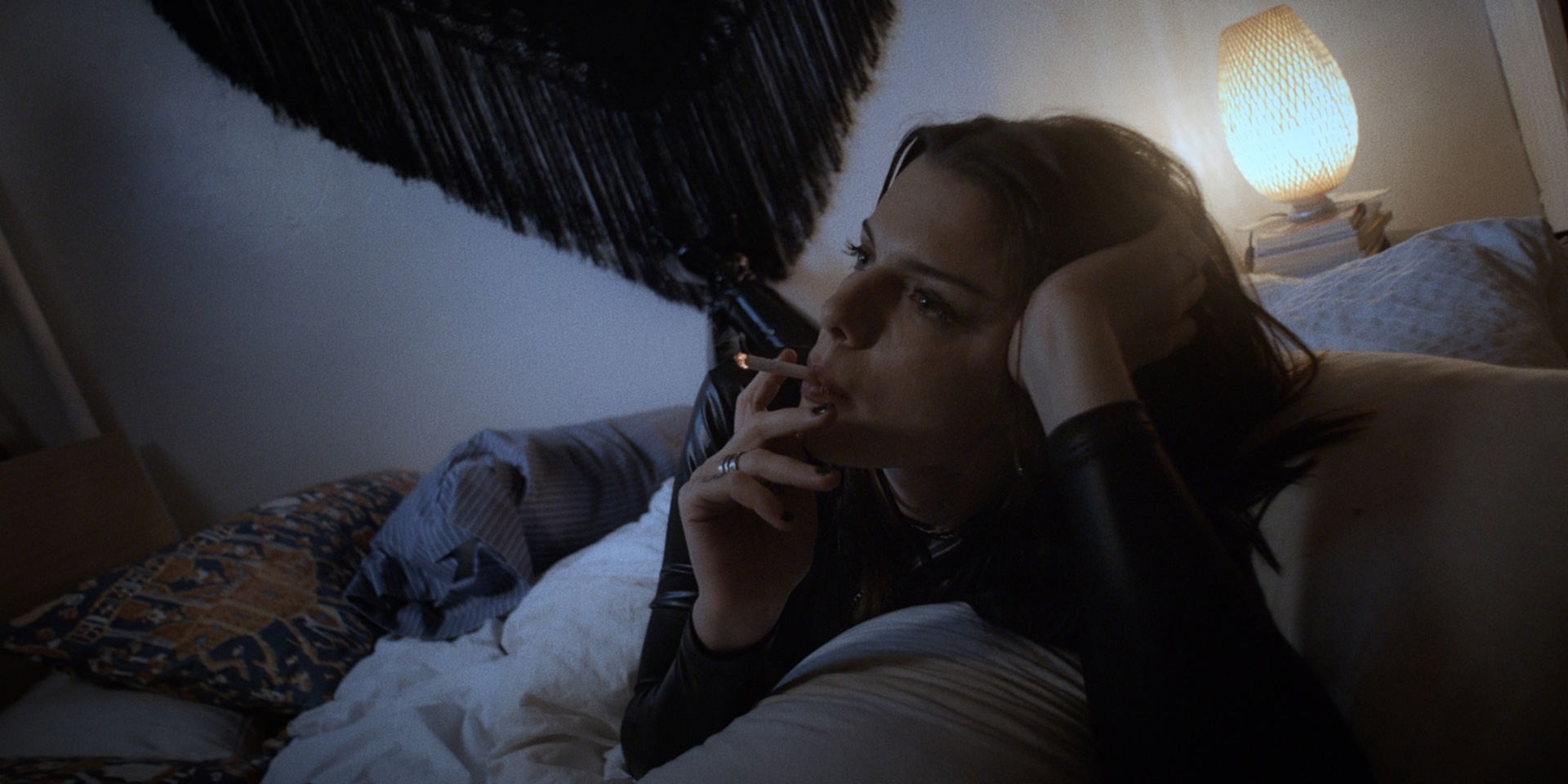 It doesn’t get more cynical than the answer Jack (Peter Vack) gives to his own question, “What’s the common thread that connects every relationship you experience?” Scarlet (Julia Fox) nervously laughs when he asks it because she knows it’s rhetorical the moment he finishes. He doesn’t want her opinion. He wants to tell her what he thinks and does exactly that when explaining how we all exist to use others and be used by them. Just because Jack’s insight is overly cynical, however, doesn’t mean he’s wrong. A post-capitalist society built atop the internet that’s been consumed by the transactional ease of technological advances demands exchange, exploitation, and nihilism. Scarlet talks to Jack because he pays her. Jack talks to Scarlet because she fuels his orgasms.

They use one another to satisfy their needs and ultimately become slaves to that system. Despite writer/director Ben Hozie’s script providing context through their on-screen conversations that this was never their intent—Scarlet didn’t plan on being a cam girl this long and Jack only ended up a reclusive loner after his roommate died—it became their reality anyway. Once they dipped their feet into what these choices could give them, they lost themselves. Scarlet found the means to leverage her looks on easy money that could sustain her while Jack gravitated towards artificial stimulation as a means towards pleasure. That their lies can push her back on course with her passion to paint while giving him a façade of emotional friendship shows the depth of their descent.

I’m getting ahead of myself, though, since PVT CHAT doesn’t actually care about Scarlet in this capacity until halfway through. No, she’s but an object in Jack’s sordid life of instant gratification that he craves to own precisely because he cannot have her any other way. If he wanted a real romance, he wouldn’t have ended things with his friend Emma (Nikki Belfiglio). If he wanted a human connection to fill the void of his deceased roommate (who he didn’t seem to really be close with anyway), he wouldn’t need to befriend the man (Kevin Moccia’s Will) hired to paint the lapsed apartment his landlord evicted him from. He’d get out in the world. He’d talk to people that weren’t already in his personal space to begin with.

Scarlet is thus his escape—an illusion willing to call him by his name unlike the masseuses selling happy endings whenever the coin-flip bet he makes with himself allows him to buy one. And she’s an effective device insofar as how her actions force Jack to recontextualize his own. To see her honesty’s effect on him despite his continuing to put on airs with her is interesting because it reveals how much power he’s allowed to bestow upon himself without facing any real consequences. By playing digital blackjack during the day and masturbating to cam girls at night, he becomes a master of his domain to the extent that he doesn’t even care his getting kicked out of his home. Four walls pale in comparison to his MacBook.

Real friends pale in comparison to knuckleheads like Will and his ex-con buddy Larry (Buddy Duress)—guys to keep at arm’s length while reveling in their unearned idolatry of his gambling prowess. A girlfriend pales in comparison to Scarlett. Jack lives an existence with no true basis in reality and he’s getting away with it because it gives him everything he needs with minimal upkeep. So when he thinks he sees Scarlet at the corner bodega (she says she lives in San Francisco), we ready to watch it all come crashing down. Because whether or not it’s actually her doesn’t matter if he believes it is. The blurring between digital and physical sends Jack spiraling as its increased satisfaction blinds him to the inevitable price of pain.

Unfortunately for the film, however, it too unravels right alongside him. Suddenly we get an abrupt shift to Scarlett’s perspective—a jarring development that could work if the whole moves completely to her realm. But it doesn’t. Hozie merely pretends as though she’s always been an important piece to this puzzle and not the toy he wielded to expound upon Jack’s life. We therefore move from one to the other now, seeing him embrace the transactional nature of his life while she begins to fight against it within her own. Does that mean one is right and the other wrong? Are we supposed to champion one above the other now? Is Jack a villain in his own story or has Scarlett been using him just as much?

Questions like these come fast and hardly any answers follow. There are some interesting moments that speak about the difficulty of leaving the artificial world we create around ourselves even when a better one has been found in reality (Hozie purposefully presents the juxtaposition of masturbation and distanced intimacy against sexual intercourse to show how they can yield the same response depending on how our brains have learned to process one above the other as our main source of pleasure), but very little is said in the aftermath. I also love the excitement Jack gets from gambling Will’s money for the latter’s son’s tuition. The rote act of turning profits acquires human value: objective becomes subjective. And yet the resonant human risk that results are ostensibly written off.

This fact applies to PVT CHAT in its entirety. Its journey contains a lot worth delving into and Hozie does find moments of clarity in his pursuit to show us this raw look at two people traversing the rocky landscape of twenty-first-century living, but the destination lacks its captivating, darkly sinister energy. Where the suspense in not knowing if these two will ultimately screw each other over gets us on edge, the result sidesteps ramifications for an incongruous bow-tied fantasy instead. That’s not to say these characters are irredeemable or that people who engage with the world via their computers are. They deserve happiness too. The stakes built from and acted upon Jack and Scarlet’s tenuous relationship are simply rendered empty once love seemingly erases their existence.