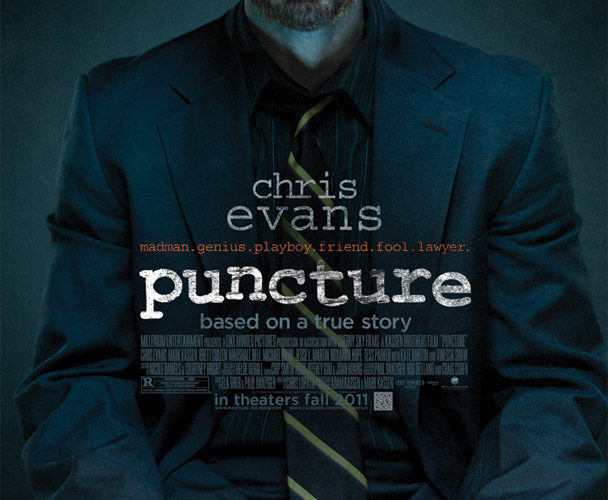 We hope that every film is created because a writer had a story that they felt compelled to tell the world, a director who felt obligated to share his vision, and actors who were so driven by the story and opportunity that they simply could not sleep at night if they didn’t participate. It is from this fire that something wonderful, organic, and important can jump off the screen and into our lives, leaving some sort of indelible mark on us as we shuffle out of the theater.

This contrived, convoluted mess is less a movie than an erector set of sentimental gimmicks meant to make us feel without ever giving us the impetus to actually do so. A nurse (blink-and-you’ll-miss-her Vinessa Shaw) accidentally contracts AIDS but lives just long enough for us to see her bond with her adorable young children. This sets a couple of small-time law hacks to pursue a case against the hospital who refuse to pay for newer, safer needles that could save the lives of the very nurses and doctors they employ. They uncover a conspiracy, kept deep within miles of bureaucracy. Soon they are in over their heads and can’t fight against the big corporate lawyers…and you can pretty much fill in the blanks from here.

Chris Evans stars as Mike Weiss, a man who has so many quirks and character elements that it feels less like someone based off of a real person and more like the culmination of Oscar-bait checkmarks. He’s alternately: a loose cannon, drug addict, righteous defender of the unjust, adulterous husband (who grants a divorce to his wife at a party via gunpoint, then returns to said party), introspective worker, complete screw-up, frequent partier, eccentric genius, charismatic charmer and keeper of an iguana. It’s a credit to his talent that you even buy half of this character, built more like a superhero than Captain America (he’s also the most buff crack addict I’ve ever seen on screen or otherwise). This picture won’t put him into the “serious actor” camp quite the way he surely wanted, but it will definitely open up the opportunity to get another (hopefully better) part like it.

Puncture is truly let down by co-director and co-producer Mark Kassen, who plays Paul Danziger, Weiss’ law partner. Unfortunately his failings occur both in front of as well as behind the camera (his brother Adam Kassen is the other co-director and co-producer). Kassen is as strong as an overcooked bit of spaghetti, built to be a strong foil to Evans who never has any power in the situation. Further, he’s a man of only one face. His pregnant wife has complications but their insurance money is gone: blank face. The firm is losing money over and over again while his partner gets coked up and passes out in his truck instead of making a big deposition: blank face. Their firm is far too small to go up against these big giants so when he confronts Weiss and tells him, for the umpteenth time, that they have to drop the case, he does it with all the authority of..oh wait, it’s another blankface. This could probably be explained by his attempt to show emotion in one showcase scene when tragedy inevitably strikes, showing his range in what I’ll call “twisted face.” Sadly, it made me long for blank face.

The script, written by Chris Lopata off a story from the real-life Paul Danziger and Ela Thier, alternates from victory to defeat like a weeble-wobble, never giving the space needed to let these problems settle. As soon as Evans has to look mournful because of another in a long series of calamaties occurs, here comes a hail mary to save the case yet again. They range from the mega-powerful, scumbag super lawyer Nathaniel Price (Brett Cullen, who really needs a waxed moustache to twist) who unabashedly follows the money over his principals to a US Senator who comes aboard the case just as quickly as she exists. For every drop there’s a pick up, lending the film to feel more like a drive through a hilly road than a trip down a roller coaster.

Further, the direction is rudderless, especially in a visual sense. Take the meetings that our plucky lawyer team takes with the big, corporate law firm. First, you see the building in a rip of Breaking Bad‘s time-spanning montage, where the clouds move quickly as sound wooshes by through the speakers. Except we’re not really turning time…we’re just going up to a board room, one that is as cold and frigid as an ice box. If the acting and intentions didn’t bring that point across, the excessively blue-tint (taken liberally from Traffic) over the whole scene would do it. With all the subtlety of a Las Vegas marquee sign, the audience is told how to feel, a trait that follows through the movie in general. So, at the very least, it stays with a consistent vision.

Late in the film, Michael Biehn shows up as a sort of deep throat character who has been watching the investigation from afar. He produces a real-life tape of children in Africa who gather used glass hypodermic needles to re-use through ignorance of the dangers this system produces or because of the sheer desperation of their situation. It’s at this point where you realize that there is a strong message here and an important story that needs to be told. However, juxtaposed against the rest of this movie, it feels like exploitation, just another grab at any form of sentimentality to win the audience over.

The film is dedicated to the real Michael Davis Weiss, who, by all accounts, did a wonderful thing with his crusade. He deserves a movie befitting his struggle, because this is certainly not it.

Puncture is now in limited release.