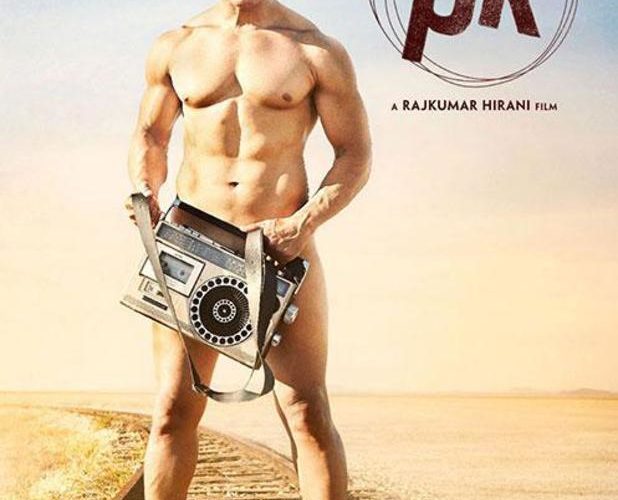 In a season of Oscar-bait one of the most daring films of the year can be found in that perhaps sole multiplex in your region that frequently dedicates a screen to Bollywood films. PK, directed and co-written by Rajkumar Hirani (3 Idiots), is a bold exploration of religion wrapped in a sci-fi drama with several moments of broad comedy thrown in to lighten the mood — after all, it is Bollywood. The blend works nicely, especially as an almost atheist text. (Although one can argue it reverts back to the notion of a personal creator out there in the universe, it’s not quite a cop-out so much as it is the pretext made clear by the film’s opening sequence.) Along the way, the film’s only moment of playing it safe is a disclaimer announcing the feature as a work of fiction; perhaps Sony should make such a disclaimer at the start of The Interview, if it ever sees a release.

Our title character PK (Aamir Khan) arrives on earth, naked and roaming through rural India, while simultaneously in Bruges two graduate students, a Hindu and a Muslim, have one of those famous movie meet-cutes while attempting to see a performance of “Bachchan reads Bachchan.” Rebellious Jaggu (Anushka Sharma) attempts to marry Sarfraz (Sushant Singh Rajput), who gets cold feet wondering what their parents will think. Jaggu relocates near her family in Delhi, taking a job in television news. On the train she meets PK, an awkward creature seeking God – in the abstract – by handing out “missing” flyers. Finding herself drawn to PK, she volunteers to hear his story.

PK exists well within a tradition of Bollywood pictures about identity. Often they explore the Indian identity abroad (ranging from a masterpiece like Swades to the recent silly Canadian comedy Dr. Cabbie), and this film’s ambition is to explore human identity as PK goes in search for “his God,” taking on a religion leader aiming to expand into a mega-church. As gentle as its title character, with his bulging eyes and grin, the film is genuinely interested in good-natured discovery (and processing foreign transactions he cannot understand, like basic commerce in a funny sequence), while veering slowly into truly subversive territory along the way. An impossible creation for Hollywood to fathom and release in the United States, PK is a useful exploration and send-up of the mega institutions, in favor of a closer, personal relationship with the abstract concept of God, the creator. Perhaps for its planned sequel PK will land in the United States and challenge Joel Osteen.

Well-crafted and mostly entertaining, PK is much more than the story of a man who fell to Earth, yet it lacks the engagement, perhaps by design, of Hirani’s wonderful 3 Idiots. The character of PK, although filled with wonderment is too cold; while he “uploads” language files from another human, he never quite becomes socialized, creating some challenges in the likability department. He can be charming in his own ways, but the arc here is a little more intellectually driven than character driven. A rare Bollywood beast, I commend Hirani for a film that has been released on a week when Hollywood has stood clear of controversy. Like 3 Idiots (a sweeping epic that took on various issues within higher education in India and social equality), PK is both pleasing and fascinating as an issues film, making for one of the most interesting pictures in a month of Hollywood prestige, a film worth seeking out, especially for the uninitiated.