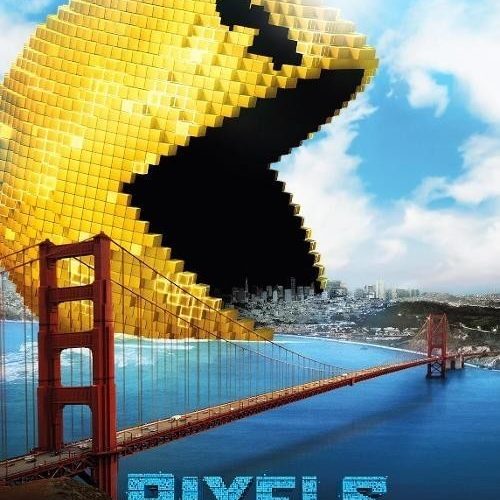 Once relegated as oddball background targets and the small cult voice of pop culture, the nerds finally have their day, and it’s lasted nearly fifteen years now. This shift of consumer power has brought about a number of fascinating priority adjustments within film and television, catering to the geeks and nerds, while still finding ways to lampoon and chastise them in the mainstream. A pillaging of all things nostalgically retro and niche is also part of that logical endgame, one that finally reaches its nadir in Pixels, a geek-centric blockbuster that turns the knife on its hypothetical audience by pretending to be a love letter to the nerd-culture of yore and then delivering one more narcissistic Adam Sandler vehicle paying deceitful lip-service to the diseased headspace of the modern man-child.

At a passing glance, Pixels seems like a fun and clever idea for a breezy bit of family-friendly late-summer entertainment; an alien invasion modeled on that fruitful spat of late 90’s sci-fi thrillers uses an armada of Atari-era videogame characters to wage an intergalactic war with Earth, one that only a small handful of faithful ‘arcaders’ can properly fend off. There’s potential in that idea, although most of it was mined in the Patrick Kean short film from which Pixels adopts its premise, leaving very little inspiration for an entire feature. Not that inspiration seems to have really been a part of the Pixels pitch-meetings; much of the high concept is used for name-dropping brand titles most of us haven’t much thought about for over thirty years, while the rest is mercilessly sacrificed at the altar of Sandler’s wilting movie career. I walked in with a mild but fond remembrance of PacMan, Q-bert and their ilk, hoping for a goofy jaunt down memory lane, but was greeted instead with the typically  noxious and lazy overtures that seem to consistently trail Sandler and his co-star Kevin James, playing here the most inexplicable President since  Tommy ‘Tiny’ Lister in The Fifth Element.

The half-baked script by previous Sandler co-conspirators Timothy Dowling and Tim Herlihy overloads on nonsense, but not the gleeful kind that should have us grinning ear-to-ear when long-forgotten 80’s touchstones like the “Where’s the Beef?” lady show up as the first signs of alien contact. Instead, the entire enterprise ominously floats around Sandler’s Sam Brenner, another faded star whose glory days apparently happened when he was pre-pubescent; Brenner has spent the rest of his life in the shadow of losing the Worldwide Video Championship to the raucous upstart ‘Fireblaster’. In the film’s present day, an attack by 8-bit usurpers from Galaga results in Sam’s childhood friend, Will (James), now the President of the United States, recruiting Sam and two other ex-gamers to help him combat the alien menace.

Bringing some brief and welcome relief from the Sandler/James duet are Josh Gad as paranoid basement-dweller Ludlow Lamonsoff, who has an unhealthy crush on an imaginary video-game babe, and Peter Dinklage, shredding his brief screen-time as ‘Fireblaster’, an egotistical malcontent who seems modeled on King of Kong’s Billy Mitchell with the dials turned to eleven. Dinklage is the only one who brings his A-game, making even a desperate scene involving a threesome with Serena Lee and Martha Stewart something to marvel at. Consider that both ladies actually show up in the film, reluctantly serving cameos, and then consider the other female characters on display, and you’ll realize that Sandler hasn’t come so very far in his frat boy mentality. Outside of an strong-arming shrew married to Brian Cox’s military man, and Gad’s dream-girl translated to flesh, the only other real female on hand is Michelle Monaghan’s Lt. Col. Violet Van Patten. You’d assume with her military standing and presence amongst the all-boys club of the gamers, that Monaghan would primarily feature alongside Sandler in the alien butt-kicking. Some of that happens, yes, but not until after a strange and embarrassing scene where she’s found crying in a closet by Sandler, lamenting her divorce, while he attempts to cheer her up by moaning on about his own ex-wife.

Scenes like that, with Sandler hogging the foreground while a completely different movie tries to play around him, are what make Pixels such an exercise in bad faith. Sure, it’s a bit bewildering to see Sandler still out there churning out oddities like Grown Ups 2 and Jack and Jill, but those movies were self-contained snow globes of tedium, protecting Sandler from the world outside his fan base, and protecting that world from him. Pixels, which has a reasonable director in Chris Columbus and features a fun, popcorn-munching premise, doesn’t need Sandler’s brand of goofy histrionics and he seems both weary of the shtick and still aggressively determined to muck up every scene.

When the guys go into action, they throw aside the calibrated skills that make them aces in favor of a more care-free shoot’em-up style that renders most of the initially interesting special effects as a swarm of visual diarrhea. For anyone showing up to see the video games doing their thing, you’re bound to be severely disappointed. Sure, there are cameos by Joust, Burger Time, and Megaman, and Q-bert does show up as a comic relief sidekick, but none of it amounts to anything and each wistful moment of nostalgia has to pay Sandler’s piper, which includes Q-bert peeing all over himself. The movie’s most inspired scene, featuring a tender moment between an evil PacMan and his creator, Professor Iwatani (Dennis Akiyama), is largely wasted and thrown to the side. Worse yet, is that the simple design of the games is lost in favor of visual effects that often look muddy and incoherent.

Pixels is a confused and hastily mounted film, particularly on the script level, and Columbus does what he can to keep it afloat, but the tones never really mesh. Even without the Happy Madison team, the movie would feel like a disjointed hybrid, not unlike the alien washout comedies Evolution and The Watch, which never found the right tone between their sophomore laughs and their sci-fi premises. Sandler and his boorish mannerisms, as well as the insincere flirtations the film aims at the geeks in the audience, sink the film to a lower level, and it’s hard to recommend it at all. He wants to posit himself as one more sensitive, misunderstood nerd, but Sandler keeps reverting back to that guy who likely bullied his potential audience. In many ways he still is, making Pixels the cinematic equivalent of a swirly. No thanks.