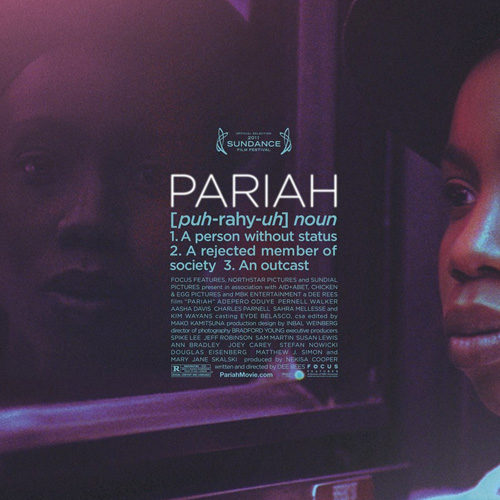 If Lee Daniels‘ Precious made for a heightened, melodramatic, and mostly satisfying expression of the external trials — poverty, an abusive mother, a runaway father — plaguing a New York City-based African-American teenager, then Dee Rees‘ Pariah takes a similar character in a similar locale and tosses her into an opposite realm, one of internal struggles and ultimatums. While that choice is ultimately what hinders Pariah narratively — Rees‘ script is too pinned-down in its protagonist’s inner workings to generate a consistently compelling plot — it’s also what gives the film its unique identity. The events may seem recycled, but the character and the film’s personal perspective certainly do not.

Adepero Oduye, the recent recipient of an Independent Spirit Award nomination for Best Actress, stars as 17-year-old Alike, an exceptionally intelligent student who shows particular promise with her poetry. She’s reserved for her age, not very talkative, and her enclosed demeanor is balanced compatibly by the brashness of her best friend Laura (Pernell Walker). Laura is a known lesbian. Alike realizes that she probably is, too, though she’s far from ready to make that fact public.

Part of the reason is her introverted nature. Another part is her parents, who seem to be at odds over every topic under the sun. Alike’s detective father Arthur (Charles Parnell, terrific) is a hard-worker, regularly plugging away until early-morning hours. He’s a supportive father, but his burdening work schedule keeps his understanding of his daughter at a distance. Alike’s mother Audrey (Kim Wayans), a sensitive medical worker, is much more aware of the possibility of her daughter’s sexual confusion. She raises an eyebrow when Alike, unlike her outgoing younger sister (Sahra Mellesse), skips out on prom. And when Alike finally mentions that she’s falling for someone, her mother plays it differently than her father, refusing to quickly assume that Alike’s love interest is a man.

The object of Alike’s desire, in fact, turns out to be Bina (Aasha Davis), the daughter of one of Audrey’s colleagues. The two are encouraged by their parents — mostly Alike’s mother, whose concern over her daughter’s isolation is growing — to walk to school together, a rote routine that is soon expanded into a deeper chord of companionship. Bina is more comfortable in her skin, more overtly sexual. She’s a far cry from demanding, though, and that delicate sensuality slowly draws Alike in.

Pariah is based on a 27-minute film of the same name that Rees directed back in 2007. The award-winning short also starred Oduye in the title role, and also called upon the images of cinematographer Bradford Young, whose work on the 2011 Pariah won him a prize at Sundance. The comfort and familiarity fostered by a long-term association of that sort is evident in the feature-length film, which thrives on an uncommonly astute understanding of character and place. Oduye‘s lead performance is a treasure of complexity and confusion, each stage of which is gorgeously reflected through Young‘s vibrant, zesty photography.

The bony narrative development, however, weighs the film down like a brick, keeping it from reaching the level of emotional epiphany that the performances merit. It’s an exciting full-length debut from Rees regardless, with hardly a directorial beat to complain about. That the film is undernourished from a plot standpoint — there are even noticeable tugs in order to stretch the piece to 86 minutes — is a drawback, but not one of the overbearing variety.

Pariah is now in limited release.