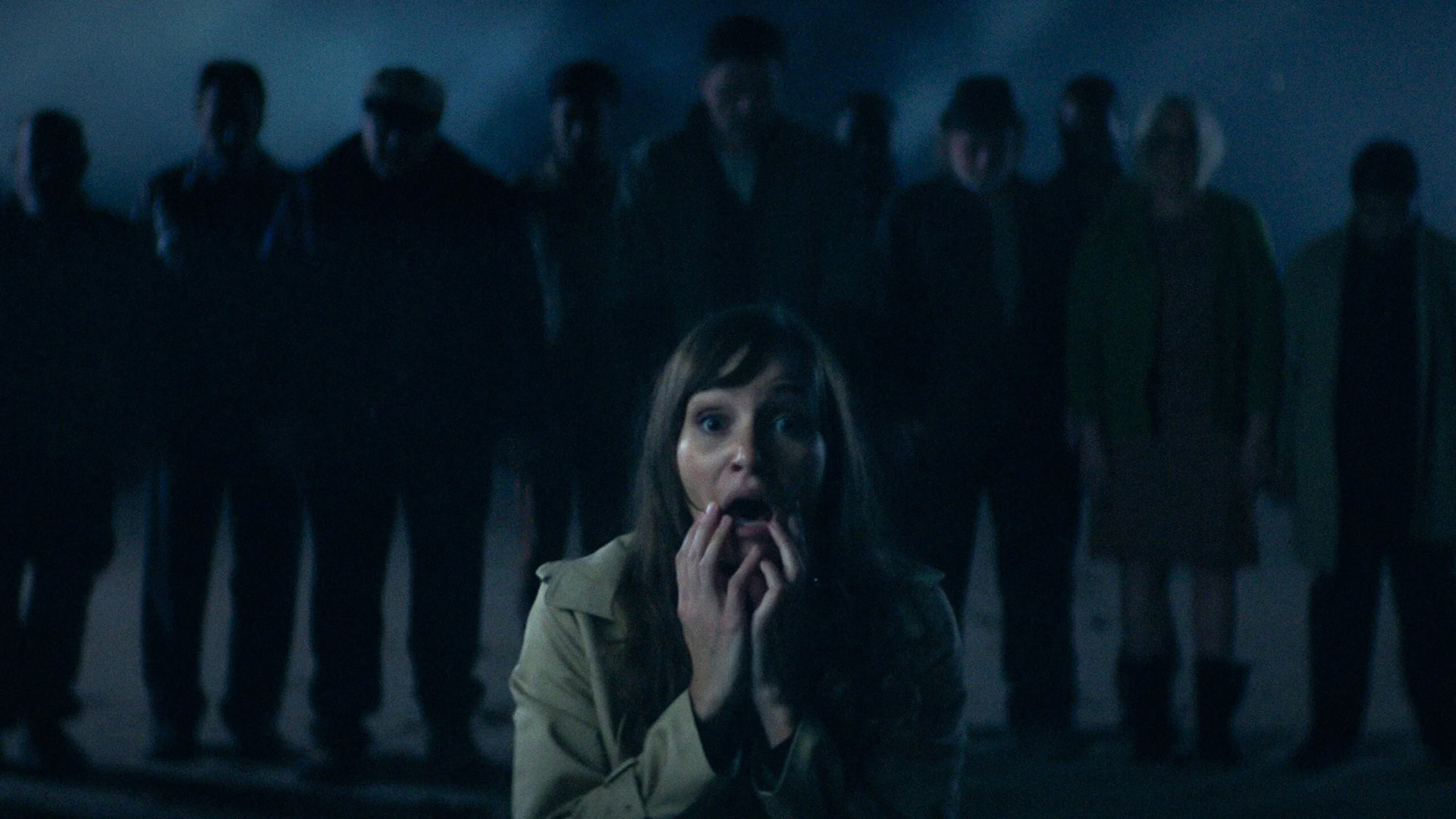 When your dementia-riddled mother starts screaming about nightmares following her and demons crawling out from the water, it doesn’t matter how lucid she appeared beforehand. You tell her what she wants to hear, try to make her as calm and comfortable as possible, and await the inevitable. That’s what Marie Aldrich (Jocelin Donahue) did when Ava’s (Melora Walters) clear eyes and confident voice spun an outlandish tale surrounding the isolated island where she grew up and left without ever going back. She heard her mother’s pleas to ensure no part of her body returned there in death and assured her with a promise that none ever would. Except she had no control. Ava’s will demanded she receive an island burial and the law guaranteed it.

Writer-director Mickey Keating’s latest film Offseason looks to provide a reckoning in response. The question is whether the person being punished is Ava or Marie. It could very well be both, considering how little the latter knows about this place—so little that the faces of the people there who seemingly know her drop whenever it becomes obvious Ava told her daughter nothing about their place in her past. Marie’s ignorance towards them isn’t malicious, though. She can’t actively forget that which she didn’t know in the first place. When you’re dealing with supernatural elements and hellish domains thought by outsiders to be Heaven, however, the sins of the parent very often become the sins of the child. They got Ava back. Now they want Marie.

This is their 80-minute attempt to take what’s “rightfully” theirs… or “His” if you believe the story Ava told about demonic curses. The island has an advantage, too, thanks to Marie’s aforementioned ignorance towards its customs. All it must do is write her a letter with the tragic news that her mother’s grave was vandalized to get her to come running with her estranged boyfriend George (Joe Swanberg) serving as chaperone. Only upon their arrival will she discover the sole bridge to this seasonal paradise is about to be lifted until the spring. Anyone caught on the other side will have to wait if they can’t catch a boat to the mainland, so Marie must find the cemetery caretaker quickly before becoming stranded herself.

You can guess what happens next. A fog arrives. Ghostly human visages in the woods appear with white eyes. And time and space seem to be altered once Marie and George become separated—their voices heard, their bodies invisible. A visit to the local bar is supposed to provide clarity, but it too delivers an off-putting air of creepy intent. Everyone seems to know who Marie is and they all appear to be in on some joke at her expense. When a fisherman (Jeremy Gardner) dares to speak in more detail (cryptically or not), others pull him away. The whole town is simultaneously luring her in and scaring her off, distracting and delaying until she ultimately has nowhere to go but deeper into its malicious clutches.

Keating portrays it all with an effective air of suspense and uncertainty, breaking the script into chapters with fonts that devolve in penmanship and increase in portent. How much of what Ava told Marie on her deathbed is true? Could there be a logical explanation for what’s happening? Or has this unwitting descendant of terror and fear stumbled into the nightmare from which her mother hoped to spare her? The journey is sufficiently eerie and Donahue’s lead performance affecting to the point where we do worry about her fate. Where it all takes her may not feel too high-stakes or deliver any surprises genre fans wouldn’t already expect, but the production value goes a long way towards helping us forget all that. Offseason stays on-book throughout.

One could call the numerous flashbacks excessive; most provide little more than visual evidence of plot points we’ve already learned via dialogue, but having that reference adds plenty to the experience when someone like Walters is allowed to do what she does best. I could have done without the quick cuts to previous scenes in moments of revelation, as though we can’t be trusted to put two-and-two together, but I get it. If the film takes ample space to breathe as far as mythology is concerned, a few cues to better situate the audience isn’t completely out-of-bounds. Would things be tighter without them, forcing Keating to make such details more direct? Sure. Its Twilight Zone construction and conclusion just might play better truncated.

As it stands now, though, I still found myself engrossed in its mystery enough to see things through. It isn’t as captivating as Keating’s Darling, but I do think it’s a step in the right direction after Psychopaths (albeit much more generic in execution than both). Sometimes familiarity simply allows room to make certain style and aesthetics hit the mark. Maybe it doesn’t stimulate your intellect as much as other recent genre fare, but it definitely offers an engrossing setting through which to travel for 80 minutes. And Donahue’s Marie supplies a protagonist that earns our investment—both to discover how far down the rabbit hold she’ll go and whether she’ll ultimately escape. It’s a mood piece that doesn’t pretend it’s anything more.

Offseason opens in limited release and on VOD / Digital HD on March 11 and will stream on Shudder later this year.