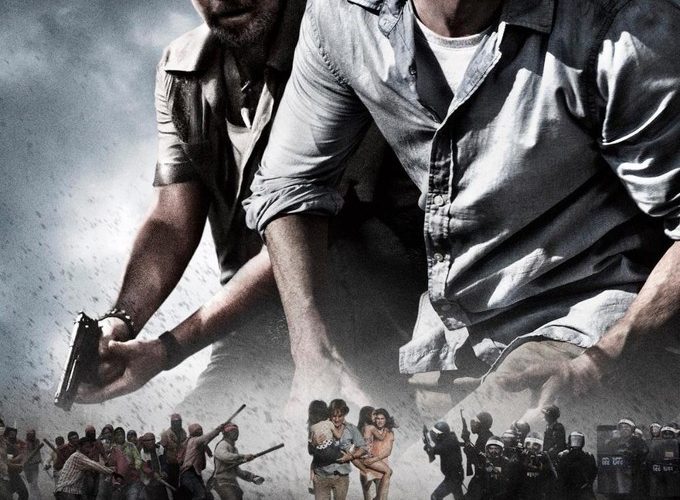 Violence is a true horror in No Escape, a gripping microcosm of inhumanity set during a brutal coup d’état. Director John Erick Dowdle has a knack for placing audiences into claustrophobic, lethal environments (Quarantine, As Above, So Below), and has found his most scarring yet with an uprising in Southeast Asia, a wildfire of hatred where killing feels to be the most productive choice. Though told from the perspective of an American family, this relentless action-horror is rounded as a universally relevant chaos, in which protecting family is the primal cause for both sides of the slaughter.

Owen Wilson and Lake Bell play Jack and Annie, the husband and wife who venture to Thailand for his job, bringing their two daughters, her rice cooker, and by no coincidence, some of their first-world arrogance in tow. The morning after they land, Jack goes out to get a newspaper from a local stand, of which he and the owner barely understand the other. (Cringingly, he insists on the most recent copy of an American paper.) But suddenly the environment changes. In a bout of terrible timing layered with the randomness of violence, Jack turns around to see two massive, weaponized gangs running at each other, and by all definitions he is caught in the middle.

From here, No Escape becomes fitfully uncomfortable, messy like real world chaos. People native to the area have started to ruthlessly execute foreigners, and turning Jack and Annie’s hotel into a slaughterhouse. A relentless wave of murder has hit this city, and these machete-wielding rallies are as unintelligible to Jack and his family as the nation’s current economic situation. With no answers, Jack can only focus on survival, by sneaking his family through the carnage, and hopefully getting the hell out of the country. Meanwhile, Dowdle plays within the audience’s worries of xenophobia, using Jack’s limited perspective as a handicap; we don’t know the coup’s side of the story until almost the end.

At the film’s center are the smartly-cast Wilson and Bell, two specifically non-violent actors (especially for those who missed Bell in Katie Aselton’s marvelous Black Rock) more familiar to punchlines than barbarism. They prove easy to contextualize as regular people, and equally as shocking when their self-defense becomes violent. Both actors are in tune as well with the horror of the story, their moments of violence successfully horrific to become any type of reward. Even with its leads, there are only more people with blood on their hands.

The wild card to this story is another foreigner, the obtuse Hammond (played by Pierce Brosnan, who can play a great weirdo). Fitting to this movie’s intent, his character may appear with a gun on the poster, but his Hammond is more complicated than one representation of violence. During his haunting monologue towards the end of the film, he confirms its status as a foreign policy disaster, and the corporate influence at the center of this chaos. It’s a moment that welcomes in the empathy previously waiting outside, the last-chance seed to counter-acting such madness.

In his crafting of this action-horror, Dowdle keeps the story pretty taut. But in one sequence, he does himself no favors when he infamously gives Jack a pretty stupid idea of how to get his daughters from one roof to another, and punctuates it in slow motion with another dramatic bass-drop. In other movies it may be a forgettable moment, but it’s a sore thumb that makes No Escape even more susceptible to scoffs, and infamy.

And yes, there’s a bigger issue – pushing back against the empathy I feel from this film and its character is its very sticky insistence (in the film, in the press notes, and as a reminder from very kind publicists) on having the setting be an unnamed Asian country. Even though “The Great People of Thailand” get a shoutout in the end credits, and the Dwyer’s goal is the border of a little nation called “Vietnam,” the story doesn’t take place in Thailand. It’s not the coup that’s the problem, especially with a violent uprising providing a claustrophobic tragedy more personal than something like a natural disaster. But by preferring the location to be “Somewhere in Southeast Asia …” the people who are meant to complete this representation of a very human chaos are more faceless than they should be. This is counterproductive to the film’s intelligence too, which is smart about crafting thoroughly un-savory violence, but not so much about verbalizing how it is more worldly than its center arrogant Americans.

Dowdle’s presentation of violence is what makes this film so effective, the hate within it so tragic, and its political statement so disturbing. Working with the speed of an action-horror, No Escape nonetheless maintains its ugliness when showing a world thoroughly imploding; there’s no desensitization to what a human being can do to another in this environment, and even innuendos are used for reaction shots that bring even more trauma. We watch Annie, not the actual violence, as she listens to insurgents burst into a hotel room next door, murder its inhabitants, and then try to break into hers (one of many moments in which the film’s sound design raises the trauma, and is fantastic). Similarly, there are no “cool deaths” here; no heroes, and no relief.

No Escape is a visceral slice of anarchy that honors the terrifying unpredictability of violence. It’s a universal nightmare that aptly explores fear as violence’s primal motivator, whether in outrage or self-defense, with all of the ugliness in between. We are not born with the desire to kill, but are pushed to it in some form. No Escape is a brutal byproduct of a world that is disconnected, either/or by ignorance, anger, and fear of the other.

No Escape is now in wide release.