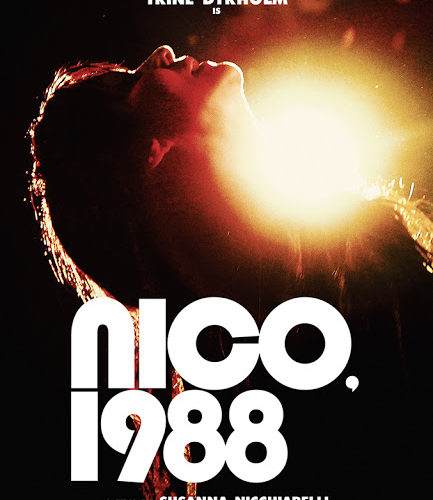 The curse of many a female artist has been that despite their brilliance and the longevity of their careers, they are forever linked to their relationships with certain men. Whether they be mentors, lovers, or children, these men take over these women’s relation to the world denying them and their audiences the ability to see their true, whole selves. In Nico, 1988, writer/director Susana Nicchiarelli chronicles the legendary artist’s last two years and her relationship with two men: Lou Reed of the Velvet Underground, with whom she collaborated in one of the most influential albums of the twentieth century, and her son Ari. That only one of these men is portrayed in the film says loads about the central conflict Nicchiarelli explores: when will the world stop defining women based on the actions of men?

We first encounter Nico (Trine Dyrholm) as she prepares to embark on a European tour. She has been battling heroin addiction for years, and because of her ill-natured temperament she’s having trouble forming lasting relationships. Her manager Richard (John Gordon Sinclair) seems to be the only person willing to hang around her for long, despite her constant aggressions and tantrums. When she goes on interviews she refuses to talk about the Velvet Underground, and when a DJ refers to her as “Lou Reed’s femme fatale,” she asks him to stop calling her that.

Nico’s hatred for Communism, talking about her youth, and the moniker she was given by a photographer who knew her as Nikos Papatakis’ girlfriend (she preferred being called Christa, her real name) are among the many things that make her despair. And yet, she’s forced to engage with all of them constantly: at one point she performs in Communist Prague, people can’t stop asking about her past, and only the people close to her call her Christa.

But if Christa’s anger was the only thing propelling the film, it would certainly become tedious and caricaturesque in no time. Instead, director Nicchiarelli understands that this was only part of what made her who she was, and she grants us access into the other side, one craving the love she wasn’t always able to give herself.

The director provides the late artist certain moments of absolution, as in scenes where we see older Nico, juxtaposed with home movies made during the 60s when she was Warhol’s muse. But rather than contrasting the free-spiritedness of the past with the resentment of the present, the film is saying: see, you were all this, beauty and wrath all at once.

In Dyrholm, Nicchiarelli found the ideal partner to bring to life such an iconic figure. The Danish actress channels Christa’s larger than life presence, her sardonic charm, and most surprising of all: her singing voice. In the tradition of the best rock musicals, the film is filled with musical numbers that inform the spoken scenes. In front of a microphone, Dyrholm goes from looking like someone who can’t fully communicate through words, into a mythical creature whose power is contained in the notes she sings.

Her rendition of “Janitor of Lunacy” is both chilling and heartbreaking, and a cover of Alphaville’s “Big in Japan” quickly goes from camp to sublime, as the quirky lyrics invite us to wonder what truly could have made her life easier? Unafraid to show her character’s ugliest side, Dyrholm goes full Arkadina as Nico pulls her son Ari (Sandor Funtek) from a mental clinic to drag him along on tour with her. Perhaps she will be loved if she forces him to love her?

The film’s greatest act of mercy is perhaps the way it frames her death. Nico died in Ibiza while she vacationed with her son. Allegedly she was on her way to find drugs when she had a heart attack while riding her bike. Rather than recreating what must’ve been a painful, horrifying death, the film shows Nico merely on her way to somewhere. The sky-blue gates of her villa open by themselves, inviting her to enter a space we can only wish as one of holiness and peace. Even though she spent her whole life trying to capture “the sound of defeat,” Nico, 1988, with its inspired finale, grants the late singer a small, but significant, victory.