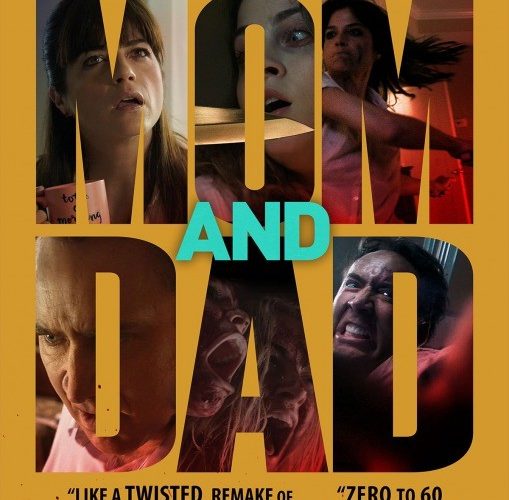 I have to imagine every parent at some point wonders where their life could have gone if they didn’t have children. This doesn’t make them bad people — only those who actually act on the urge by abandoning their families without so much as a goodbye fall under that label. It just proves they’re human. It’s merely a manifestation of fatigue and frustration as the late-night parties and carefree, irresponsible attitudes necessary to let loose disappear. Gone are the dreams you can try and fail at knowing you don’t have a spouse and two kids to help feed, cloth, and shelter. Maybe you remember the past and long for its excess or perhaps you look towards the future, confident you wouldn’t be going to bed at 9:00pm without them.

Well, Brian Taylor’s Mom and Dad (his first foray as director without Mark Neveldine by his side) seeks to give this fantasy life. He takes the zombie pandemic blueprint and puts a more specific spin on it in comparison to 28 Days Later (rage) and Mayhem (id). Without giving it a name or cause save electronic static trigger, Taylor unleashes something throughout the Ryan family’s suburban neighborhood that reverses the genetic imperative parents feel for their offspring. Rather than do whatever is in their power (or beyond) to keep their child safe, the afflicted adults now possess an unavoidable need to destroy them. They wait outside the school fence, foaming at the mouth with malicious anticipation. The cure: ensuring their sons and daughters will never breathe air again. If you’re familiar with Neveldine and Taylor’s previous work (Crank and Gamer among them), you’ll know subtlety is a hindrance to the high-octane, wall-to-wall action brought. So don’t be surprised when this endeavor begins with a car seat baby locked inside a van that’s parked on train tracks with a locomotive heading its way. The easiest way to show what’s at stake is to let a parent with kids too young to defend themselves wreak havoc without remorse. The world will see it as a tragic accident, the next instance a horrible coincidence. Only when the numbers rise to the point of pattern do schools get notified so that the town becomes aware. Until then we watch the little things that needle their way into every parent’s head.

For this we meet the Ryan clan: “cool” dad Brent (Nicolas Cage), depressive mom Kendall (Selma Blair), rebellious teen Carly (Anne Winters), and playfully naïve Josh (Zackary Arthur). We look inside Brent’s head to see a perpetually playing memory of the time he stole his dad’s car to take a joyride with his naked girlfriend in his lap. We follow Kendall on a normal day’s routine going through the motions at Zumba and being disrespected by the daughter who used to be her best friend. Carly is earmarked as a rebel because she has a black boyfriend (Robert T. Cunningham’s Damon) and wild BFF (Olivia Crocicchia’s Riley) while Josh’s youth gets him in trouble with strewn about toys and a penchant to take in dying animals.

It’s your common nuclear family rife with unwarranted mistrust and an abundance of miscommunication. But where the run-of-the-mill drama would have kids screaming and parents punishing, this demented romp turns much more sinister. We watch as the town goes mad with gruesome deaths splattered in blood. One moment has a mother choking the life out of her daughter before looking up with a chipper smile to say “hi” to the recently deceased’s friend. This aspect makes the whole even creepier because there’s actual pre-meditation at work despite the adults having no control. It’s not bloodlust; it’s filicide. The infected have a goal that can be completed so life may go on. Peace can be achieved by quarantining the town in order to let “nature” run its depraved course.

But why worry about the macro issues when Taylor can go small within this grand scheme? He only goes wide to set-up the scenario, pushing his lens tighter and tighter until the family is engaged in a volatile standoff within their own home. It’s here that the psychological underpinnings of what’s happening reveal themselves through flashbacks that show the tenuous line between knee-jerk anger and intrinsic love. We see how loving Brent and Kendall were when their kids were younger, their lives still optimistic. It’s the perfect juxtaposition against their sharp glares with meat tenderizers and electronic saws in hand while Carly and Josh wonder what to do next. The only thing keeping us from despising our kids like so many strangers is an invisible, unquantifiable bond.

Everything that occurs pre-battle is where I had the most fun because imagery of parents waiting to kill their kids is inspired. Suddenly school becomes sanctuary and yet students still have it in their heads that home is where they want to be instead. There’s also some commentary about twenty-first century technology and cellphone culture, but I don’t think Taylor goes far enough to make it more than throwaway insight soon forgotten for crazed violence. As far as the latter goes, Mom and Dad delivers crazy in an exciting way that never bores. It helps that this part of the film only takes up half of the run-time and has enjoyable surprises thanks to Damon, the Ryans’ housekeeper, and Brent’s own parents (Lance Henriksen and Marilyn Dodds Frank).

The kids don’t have much to do other than survive, so the onus falls on Cage and Blair to carry the load. Thankfully they’re up to the task, each bringing something to the table that keeps us wondering if one might fight the affliction to stop the other. Blair is objectively the best part of the whole as a result because she retains the beaten down look of an unappreciated mother giving everything she has. She’s the quiet one with sinister ideas to smoke her kids out and you can’t blame her at times for wanting to enact her revenge upon their seemingly ungrateful leeches. Cage is much louder and subjectively why you’re watching. He embraces Brent’s yearning to break free, his wild-eyed temper often scarier before hell is unleashed.

And don’t think it’s solely for comedy. While the goal is to entertain with violence and gore, the concept is still a metaphor for how parents feel behind closed doors. There’s a wonderful flashback of rage, tears, and heartfelt introspection between Brent and Kendall that outshines the rest in its grounded honesty removed from the outlandish excess of human hunting season. Just as we question why it is we treat our own children differently than others, we also realize how special that reality is. It’s intriguing too to discover that it’s actually easier to see how unique by watching parents let everyone but their kids live rather than let everyone but their kids die. It’s one thing to love your children more and another to solely hate them.