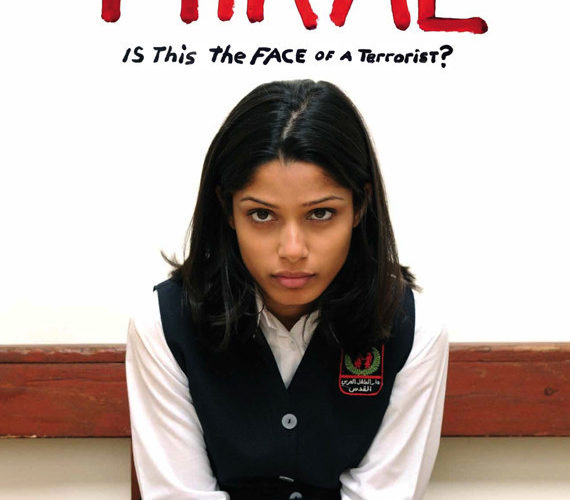 We are taught at a certain age that certain topics are up for discussion, some are only to be bandied about with friends, and some are just not to be broached at all.  In certain circles in this country and abroad, the topic of what is to be done in the great divide between the Israelis and Palestinians is not even up for discussion, as passions run so deep that an even-handed conversation is nearly impossible.

It helps explain some of the fervor around Miral, the latest from Julian Schnabel, director of the acclaimed 2007 film Diving Bell and the Butterfly, which not only discusses the conflict but does so from a strictly Palestinian point of view.  Unfortunately, when you deal with a topic with this much baggage, the film itself can get lost in the excitement.  The film’s advertising seems to have no problem bringing this point, as the poster features a photo of a school uniformed Freida Pinto, who plays the titular character, emblazoned with, “Is This The FACE Of A Terrorist?” underneath.  It is a question that is barely bandied about in its 112 minute length.

To say that the advertising misses the point of the film is to say that the film has one. Miral is a beautiful film, shot almost entirely with a handheld camera captured by Eric Gautier which wonderfully plays with depth of field and focus.  That lack of focus mirrors the lack of a defining point in the film’s narrative. The movie is an adaptation of the Rula Jebreal‘s novel of the same name, and it feels like the best parts from the book were ripped out, stitched together, and shot as a film.  It is more of a Cliff’s Notes version of the history of the region between 1947 and 1993 seen through a largely disparate group of people rather than a cohesive narrative.

The closest we have to a main character is Hind Husseini (Hiam Abbass), a kind Palestinian woman who takes in hundreds of orphaned Palestinian children after the Israeli state is formed and their people are driven out of the new Jewish homeland.  Hind shares screen time with the unconnected Nadia (Yasmine Elmsari), an abused young Palestinian girl who is eventually jailed and gets to rub elbows with some of the more militarized members of her ilk.  She eventually marries an Imam, Alexander Siddig‘s Jamal, who happens to help out at Hind’s Dar El Tifl school.  Nadia begets Miral, the titular character introduced to us roughly forty minutes into the film, who learns about her people and way of life through teachings of the school and from more radicalized groups outside of the academic center’s gated walls.

The fundamental issue with Miral is that it asks the audience to care about the characters with very little development beyond the empathy we should feel for people in tough situations.  It’s an odd contradiction; the film tells us of the Palestinian struggle as if we do not truly know it or understand it, yet they expect us to invest in these characters because of these situations, as they make little attempt to make us invest in them organically.  By the time we get to meet Miral she immediately leaps from a child to a seventeen-year-old.

We don’t grow with her, we don’t understand her point-of-view, and because of that, we have little investment with her.  When terrible things happen to Miral (and, assuredly, terrible things do happen to her) we can only sympathize with her as an abstraction, not as a character we’ve grown to care for.  We see her and the other characters thrust into scenes with great emotional stakes for them but little on the line for the audience.  This is not helped by the film’s pace which glides on by, skipping any downtime and sticking only to the big emotional peaks.  But without any valleys in the writing, we can never truly appreciate any depth, leaving the characters to cry empty, pretty tears.

There is something interesting about a movie on this subject is out there in the American marketplace.  But it’s important to see the difference in quality between a “film about important events” from “an important film.”  Any enlightenment I can get on this situation I welcome with open arms, especially when writing this review I received an unflattering forwarded email from my aunt titled, “Muslims, as per Spanish Newspaper.”  If only the film was good enough to work on its own merits beyond its hot button subject, then Miral would truly be something worth discussing.