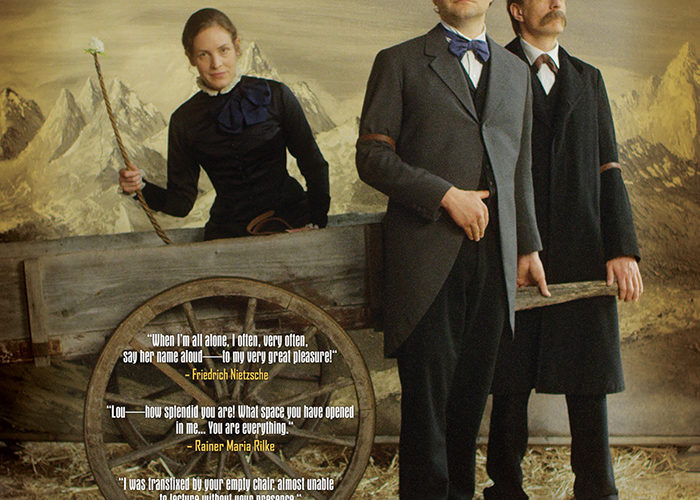 Review: ‘Lou Andreas-Salomé, The Audacity to be Free’ is an Inspiring Story About a Self-Made Woman

There’s a great line spoken by an aged Lou Andreas-Salomé (Nicole Heesters) to new friend and potential biographer Ernst Pfeiffer (Matthias Lier) upon his praise-fueled declaration that the way she lived her life — her freedom — was a touchstone for modern feminism. Her reply is, “Nonsense. What’s changed for us women since then?” It’s not presented as a jaded reaction or one specifically attached to the era in which she spoke it (the 1930s), though, because you could say the same today and not be wrong. Yes, women do have it better, but the world has still not found its way towards true equality. See #GamerGate, the Wahlberg/Williams pay disparity on All the Money in the World, and the struggles endured by the women in your life.

I kept returning to this line as Cordula Kablitz-Post’s film Lou Andreas-Salomé, The Audacity to be Free advanced because it continuously provided a mirror onto the present despite unfolding via flashback to Salomé’s adventures during the late 1800s. Here’s one of our foremost philosophical thinkers who inspired Friedrich Nietzsche, Paul Rée, Rainer Maria Rilke, and Sigmund Freud and yet you more than likely have never heard her name before. I know I never had. The answer probably stems from something as common, lazy, and gendered as history being written by men. If those luminaries were the ones the history books wanted to highlight as geniuses, they would surely relegate Lou to “muse.” But as Kablitz-Post and cowriter Susanne Hertel explain, nothing could have been further from the truth. There was a revealing tweet from Candice Frederick earlier this month asking women to retweet if they’ve been called “intimidating” or any such equivalent by men at least twice. It of course took off (41,000 retweets as of writing this) because that sort of dismissal is common even today. Now think about what it would have been like a century ago to strive for independence and intellectual excellence as a woman under that same sort of biased vitriol. This is what Lou Andreas-Salomé faced head-on, never wavering from her personal philosophy or identity whether or not both inevitably evolved with the passing of time and new experiences. She had to escape tradition, birthright, reputation, and the law to even attempt being what any man could on a whim.

And that’s what makes her story so inspiring for men and women alike. Here’s a self-made woman who had a dream and pursued it without compromise to reach her goals. There’s a commendable spirit to her pragmatism in doing so, setting ground rules with those she kept close in order to ensure no one got the wrong idea. But just like catcalling and victim-blaming rape culture persists in the present, “the wrong idea” seems to be the default for a lot of men. It’s therefore unsurprising when every male she meets offers a proposal. They admire her for her mind yet refuse to separate that admiration from their lust to possess what they believe they’re owed. The result delivers as much biography as scathing exposé on male insecurity. This is why having a woman director is so important to the message of who Lou Andreas-Salomé was. She sets the action from the vantage point of an ambitious soul living for herself. Lou isn’t a tease giving men she believes when telling her she’s their equal (Alexander Scheer’s Nietzsche, Philipp Hauß’ Rée, Julius Feldmeier’s Rilke, and Merab Ninidze’s Friedrich Carl Andreas) false hope. She’s also not the muse within their respective stories either. I’m not certain a male director could have found the delicate balance in complexity necessary to fully portray the struggle of love for a woman during an era when matrimony very distinctly dealt with subservience and ownership. I’m not because too many contemporary films still pretend as though marriage means the same today.

In a male’s hands, Lou saying she believed she always made the men closest to her unhappy would play much differently than it does. In context with everything that came before, we treat her comment as one warped by a debilitating sense of patriarchal control rather than an honest means with which to condemn her. We see how her sadness towards those relationships is a product of their selfishness alone. Those men betrayed her and themselves and in the process projected their pain upon her as though she was at fault. Despite all she did for them, their egos forgot her importance. As such, I wouldn’t be surprised if many call Kablitz-Post’s film a lie to preserve whatever image they have cemented in their minds for their heroes. Let them. Because while they hold onto a prejudiced past of incomplete history, the majority will have found a new hero in Lou Andreas-Salomé. What makes this even greater is that the film leaves room within itself to be questioned as incomplete too. It does so to admit that every work of art or account of truth arrives through the filter of its creator. Pfeiffer jokes that the biography he is writing (the film plays as stories the 72-year old Lou tells him under the looming cloud of Nazism risking to destroy her work and that of those she loved) is one of half-truths and she laughs because she admits she’s keeping some things for herself. That doesn’t make it fiction. It merely bolsters its inherent honesty.

Beyond what the film says and represents, it’s also well made. It uses illustrative, two-dimensional postcards as chapter headers for adult Lou (Katharina Lorenz) to glide through. There are mysteries to solve (Who is Katharina Schüttler’s Mariechen?), emotional landscapes to mine, and historical icons to humanize with failures proving they weren’t as enlightened as they should have been. And at the center of everything is a woman who gave herself the power to reject convention and live in a way that rendered her beholden to nobody but herself. Maybe things are looking up for those who wish to follow in her footsteps now that hers and Hedy Lamarr’s stories (see Bombshell) are coming to light. But as Frederick’s tweet revealed, we still have a long way to go.

Lou Andreas-Salomé, The Audacity to be Free opens in NYC (Village East) on April 20th and in LA (Laemmle Royal) on April 27th.