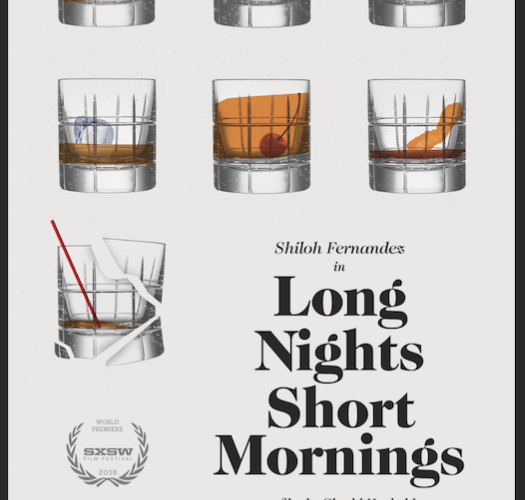 Long Nights Short Mornings, written and directed by Chadd Harbold, follows in the footsteps of the “playboy in crisis” sub-genre, populated by the likes of Alfie, Shampoo, Arthur, and Roger Dodger. ‘I do so many stupid things. I don’t know why,’ says James (Shiloh Fernandez), attempting to rekindle one of a number of lovers he’ll encounter throughout the film’s 95 minutes.

Each conquest is designated by each woman’s name. Monica (Paten Hughes) is a one-night stand thwarted by some lost keys; Sarah (Layla Khoshnoudi) is a good friend who becomes something more, for a few minutes anyway; Lily (Stella Maeve) is a steady hook-up about to slip away. The list, much like the nights, go on and on.

James wanders through New York City as though in an endless loop, constantly on his way back to a home he will never get to. The city is captured with a distinct hue by cinematographer David Feeney-Mosier. Taking place almost exclusively in the dark, every street light, taxi light and bar light emits its own palette, sometimes complimenting, sometimes disrupting all that’s going on in the frame. That these dark streets are usually vacant except for James speaks to his creeping loneliness.

Fernandez, a young actor whose yet to reveal his full potential, plays this fractured womanizer mostly cold and detached. When he does engage in one of the many semi-conversations he has, we see the guilt envelop in his eyes. James is at once intensely unlikeable and painfully relatable. Harbold directs from his script with an admirable amount of patience and confidence. Scenes run on for long stretches, sometimes to depreciating results. This is a film decidedly reliant on the chops of each and every performer. Vacant exchanges which serve to outline a handful distinct, affecting moments. And where the labeling of each scene by the name of the woman James is fucking might initially play as a bit reductive from a gender perspective, each actress is given plenty to chew on, just as often scorning James out of the room or bar as they are reluctantly accepting of his inherent charm. Every female character here has agency, and the filmmakers never take anyone for granted.

Cassandra Freeman is a standout as Anna, an actress who can’t stop herself from playing up the drama in her life. Her encounter with James starts as a welcome, somewhat comical reprieve before it devolves into something else. Similarly, rising star Natalia Dyer — of recent Stranger Things fame — impresses late in the game, during a particularly creepy sequence in which James attempts to romance a woefully young lady (Dyer) in an attempt to score some cocaine. What follows is embarrassing and then somewhat tragic. Any sexy undertones or elusive pleasure slips away from the narrative. It’s a stark and affecting last few minutes well worth the meandering journey.