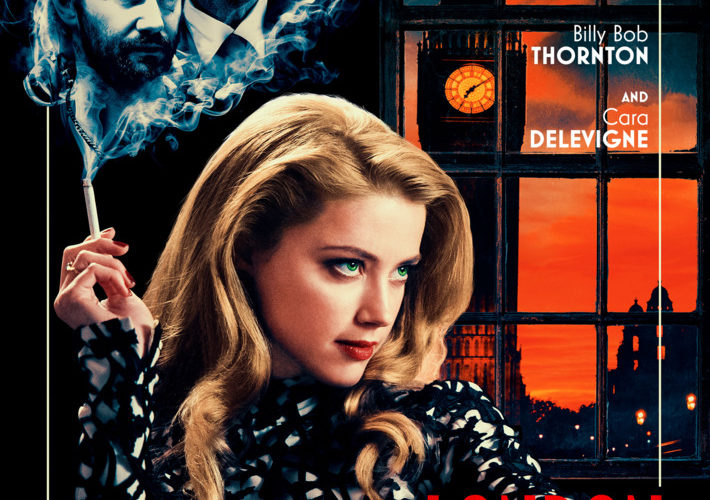 Arriving in theaters five years after it was filmed (and three years after it was scheduled to premiere at TIFF), London Fields has as much baggage as its leading lady Nicola Six carries. Amber Heard’s sexy protagonist is a carefree manipulator of men, catching the attention of Samson Young (Billy Bob Thornton), a pulp novelist who arrives in London during a period of upheaval, trading his New York flat with a far more successful writer Mark Asprey (Jason Isaac). Adapted by the author of the original source material, Martin Amis with Roberta Hanley, this is a film that isn’t short on its exposition and style.

The feature film debut of Mathew Cullen, a successful music video director, London Fields knows what notes to play but not how they ought to come together. It’s either an erotically-charged noir that’s one big tease or a biting commentary on the creative process like Darren Aronofsky’s mother!. The latter theory would certainly support the wild tonal shifts and self-referential commentary offered by Sampson, who becomes an official biographer for Nicola, who finds herself involved with two men: a thuggish professional dart player Keith Talent (Jim Sturgess)–who lives with his baby momma Kath (Cara Delevigne)–and Guy Clinch (Theo James), a captain of industry running his family’s multinational business. Trapped in a boring upper middle class marriage, Clinch finds himself day drinking at the same pub Keith, Nicola, and Samson end up hanging out in for a pint on a sunny London afternoon.

A love triangle is set as Nicola, who sees her own death, sets out to investigate with the help of Young–and by investigating, he actually watches from a distance before being pulled directly into Nicola’s spell in one of the film’s strangest scenes. Also, just for the hell of it, Johnny Depp shows up as Chick Purchase, Keith Talent’s rival who also attempts to play on Guy’s philanthropic side. Everything is connected and everything is fictional in Samson’s created universe, right down to the dart competition which is filmed against a green screen in a sparse studio rather than at a pub.

London Fields is a fascinating misfire, the kind of movie that should have skipped a national theatrical and video on demand release and been released straight to Weird Wednesdays at the Alamo. It will no doubt have an audience there, the way Skatetown, U.S.A. has found a niche amongst a crowd nostalgic for a time in which they weren’t alive.

Thankfully, the film is aware it is walking a path that better films and fiction have walked before and doesn’t take itself too seriously. This is especially true of Sampson Young, a pop novelist who tells us up front that he writes “fiction but my novels aren’t fiction” and later tells Nicola that “I’m pretty sure the critics are going to call you a male fantasy figure.” You can say that again.

Perhaps the issue here is London Fields, in a more assured director’s hands, might have felt more of the moment after Amis’ novel caught fire in the late 1980s. Decades later, the tropes and ideas have already been adapted by much more capable filmmakers. This isn’t to say Cullen doesn’t have a flair for style (the film’s production design is top notch) but this troubled production feels like a series of compromises guided by the original text. The result is something that doesn’t work, but is never boring to watch.