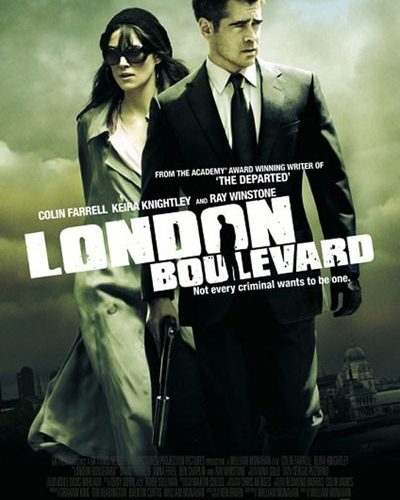 William Monahan is a “man’s man” writer, but with a bit of a humanistic touch. Monahan often plays in testosterone-clouted universes, whether it be with a mob film (The Departed), a thriller (Body of Lies) or an epic war film (Kingdom of Heaven). He then adds vulnerability, genuine stakes and plays around with well-established conventions. His promising directorial debut, London Boulevard, embodies most of those strengths.

When it doesn’t feature those great Monahan stamps, it’s a bit of a mess. After a compelling set-up — which shows its story more than telling it — there’s a meandering second act that lacks momentum. Stakes aren’t built strongly enough and a few characters don’t get their due, like, the hero’s (Colin Farrell) damaged sister, Briony (Anna Friel).

When the wheels are actually in motion, London Boulevard runs smoothly. The film begins with Mitchell (Farrell) being released from jail, already knowing he’s no longer interested in a life of crime, but everyone else around him thinks differently. Mitchell is that type of guy who any sane person, or criminal, would want as a partner. Not just because of his slick and quietly imposing presence, but also because of the rules and competence he so clearly works with: hurting people before they hurt him. Farrell is perfectly casting. A role like this requires versatility, and Farrell has got it. The actor can play charming, funny, intimidating and can give off one of the impression he’s already thinking 10 steps ahead of anyone else with a simple expression or glance. Mitchell could have been a walking caricature as a tough-as-nails goon or one of those characters constantly whining about how he’s “out of the game!” but Farrell helps humanized this already well-drawn protagonist.

As aforementioned, some characters don’t get their due, but actors of this caliber can make each second count with limited screen time. A prime example of this: Ray Winstone. Winstone fills the shoes of the main antagonist, Rob Gant, who is trying to get Mitchell back in the “business” by any means possible. Winstone and Monahan know how trite a role like that can be, so they add a twist. In certain scenes, one can’t tell if Gant wants to brutally kill Mitchell or have his way with him. He’s not flamboyant, but nor does he come off as a mustache-twirling, scenery chewing gangster.

Monahan has a good ear for tired tropes. This is further proven through Mitchel’s employer and love interest (Charlotte, played by Keira Knightley) – a famed and paparazzi stalked actress. There’s a scene where Monahan acknowledges the danger of a character such as this. Charlotte mentions how all love interests bring out the secrets and good side of their heroes; Monahan doesn’t allow that. Mitchell, more or less, is the same internal guy when he’s with Charlotte. He rarely opens up about his past and never acts cuddly for her. Charlotte is a real female character, not a plot device.

“A bit flashy but it’s fuckin’ British, inn’t?” This memorable line that Winstone spouts represents the film as a whole. Monahan intended the film to be cool, and it is. London Boulevard features a good sense of fun with a gritty pop aesthetic, old school camerawork, plenty of clever exchanges and a notable soundtrack. Monahan’s debut feels like it’s missing some connective tissue and a few character beats, but it still manages to stand out from the herd.