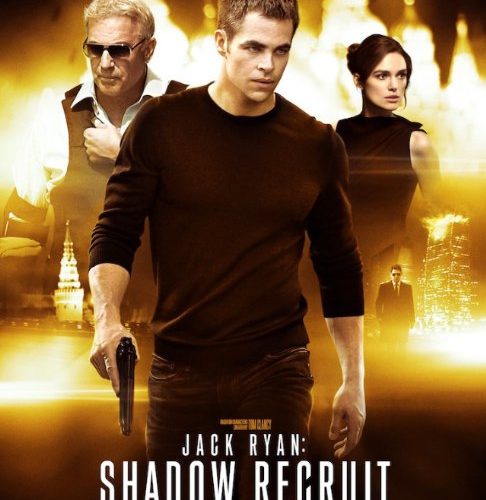 The closer Kenneth Branagh’s Jack Ryan: Shadow Recruit gets to its routine “chase the bomb” conclusion, the less interesting it becomes. The good news here, of course, is that it ends up being interesting at all, and not just one more cold, limp exercise in rebooting a franchise.

In the pantheon of espionage films, it’s somewhere in the middle—better than many of the lackluster Bond and Bourne movies and nosing ahead of 2002’s The Sum of All Fears. Anyone bracing themselves for a January bomb can sigh in relief; Tom Clancy’s Ryan is alive and well here, despite being a bit younger and more inexperienced than previous iterations.

Chris Pine steps into the role of Ryan (previously played by Alec Baldwin, Harrison Ford, and Ben Affleck) and adds some physicality to the role that moves the character closer to deadly operative than out-of-his-league analyst. On the other hand, Pine’s affable demeanor doesn’t quite lend the same gravity that Ford’s Ryan had. Out of the lot, he’s possibly the most charismatic, and at this point in his career, also the most emotionally wispy. Branagh’s answer is to delve further into Ryan’s genesis as a CIA operative and let Pine naturally grow along with character. The first of the series to have been completely conceived in a post-9/11 atmosphere, Shadow Recruit gets much mileage from the state of the world that surrounds its protagonist. The falling of the Twin Towers opens the film, glimpsed on television sets at a British college campus where Ryan is attending school. A promising economics student who looks at his homeland in flames and enlists in the Marines, Ryan finds himself injured in combat in Afghanistan and stranded in Walter Reed, getting physical therapy for a serious spinal injury. While Jack is gaining strength and making goo-goo eyes with his doctor, Cathy (Kiera Knightley with a rubbish American accent), shadowy Harper (Kevin Costner) is eying him up for CIA recruitment.

Working as an agent on Wall Street and looking for big bank deposits related to terrorism, it’s not long before Ryan uncovers a sinister plot involving massive Russian holdings of American money. The mastermind is Russian businessman Victor Cheverin (Branagh) and his plan is relatively ingenious, although it’s better left for audience discovery. Ryan suspects that this act will be heralded by a domestic physical cataclysm, most likely another pivotal attack not unlike 9/11. Ryan heads for Moscow to audit Cheverin and get to the bottom of the scheme, with Cathy trailing behind, questioning his shady behavior and expecting to find an affair.

The financial maneuvering and economic terrorist angle would no doubt have appealed to Tom Clancy (who passed  away in October), and Branagh pays attention to the nuanced details of covert spy craft, resulting in a movie that at a superficial level fits snugly into the series. What registers immediately about Shadow Recruit is a sense of modesty at all levels of the production. Streamlined and shrewdly calibrated to hit all the well-worn notes of classic cloak-and-dagger fiction, Branagh’s film is also scaled down and understated when it comes to the big action set pieces. Admittedly, the pacing is best when the actors get caught up in the various face-to-face confrontations that thrust the plot forward in the first half. Whether it’s Pine and Knightley romantically dancing around suspicion, Pine and Costner gauging the others professional fidelity, or Branagh cravenly attempting to seduce Knightley, the relational sparring is juicier than the action-oriented chases that follow. By the time we have circled back to New York, with Pine pursuing the bad guys on a sexy motorcycle, much of Shadow Recruit’s more engaging pleasures have stalled.

Still, this is a well-made and enjoyable jump-start to a new series of Ryan pictures, and if it leaves behind Clancy’s global dramatics in favor of smaller ensemble fortitude, the director and his actors never reach beyond their grasp. In fact, Branagh’s direction on Shadow Recruit feels more classically coiffed and artistically recognizable than the work he did on Thor. Focal compositions and moody editing in the vein of Hitchcock help establish suspense and emotion without the need for excessive special effects or big-budget set pieces. At one point a pivotal dialogue keeps breaking the intensity of a speeding car and in another, the foreground loses focus to the dread Ryan feels at killing for the first time.  It may arrive in the year’s cinematic dumping grounds, but Jack Ryan: Shadow Recruit still has some life kicking around in it.