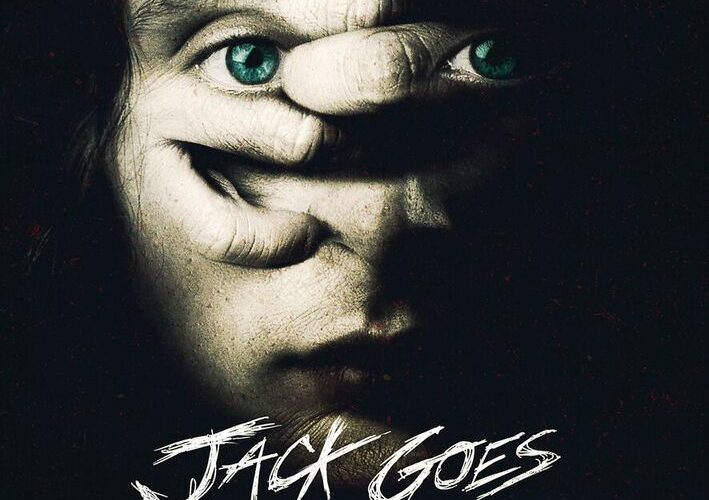 There’s no question that Thomas Dekker‘s sophomore effort as writer-director is a head-scratcher. What you as a viewer must decide is whether or not to keep scratching. I don’t think anyone outside of Dekker himself can truly unpack the type of psychological chaos occurring within Jack Goes Home, and I like that notion. This is an artist using his medium as an outlet to exorcise demons without necessarily factoring in audience expectations. It doesn’t supply easy answers, leaves a ton of loose ends as far as what’s real or fantasy, and turns deadly violent on a dime. It seeks divisiveness by throwing the kitchen sink of horrific tragedies onto Jack Thurlowe (Rory Culkin) until he can no longer breathe before letting him stew — simultaneously unhinged and deceptively anticlimactic.

But the latter isn’t deflating as much as unexpected. Most horror films begin where this one ends, focusing on a monster unleashed after unwittingly spending decades trapped inside his mind. What Dekker provides is an origin story without a forthcoming payoff. This isn’t Bates Motel working towards the already established Psycho. It’s not even about what Jack might do when the dust settles — only the pain we all endure that builds and builds until becoming too overwhelming to ignore. This is the “snap” people talk about: that indefinable moment where the person you couldn’t fathom doing anything heinous transforms into a killer without rhyme or reason. You say you don’t believe it, but a voice at the back of your head laughs, knowing it was always a possibility.

How could you not wonder about a hyper-literal pedant staring daggers into your eyes as he breaks down your inferiority with an effortlessly constructed line of dialogue utilizing vocabulary that either frustrates your ignorance or stings as their meaning sears into your skin? That’s who Jack is, for better or worse. He will belittle you with a lightning-fast tongue and think it’s educational. He will soften when personal joy arrives from a safe place removed from the professional sphere of the daily grind. And he will take the news about his father (Nando Del Castillo‘s Damian) dying in stride, sharing it with his pregnant fiancée (Britt Robertson‘s Cleo) in passing conversation as though it was as mundane as what he ate for lunch.

Jack becomes an utterly fascinating character from the get-go, the arrival of best friend Shanda (Daveigh Chase) sparking a violent sleepwalking fit wherein he growls about “the attic” only rendering him more so. Then we meet his mother, Teresa (Lin Shaye), who survived the fatal crash that killed his dad, and realize how similar her calm, pragmatic demeanor is until a violent streak unleashes with paranoia and hubris. Is this temperament what Jack has to look forward to or what he somehow escaped from unscathed? Suddenly he’s thrust back into a volatile situation where his only solace becomes the memory of childhood love corroborated by mysterious cassette tapes left behind by his father. What initially provides him nostalgia, however, soon evolves into irrefutable evidence of unimaginable terror.

There’s a lot of mirroring, from blatant similarities between new neighbor Duncan (Louis Hunter) and an as yet unknown figure of the past, to Jack’s impending fatherhood’s hopes and fears aligning with his dad’s at the time of his own birth. But with these subtler inferences on the cyclical nature of life and nightmare come random oddities for shock value rather than clarity. Excess becomes normalcy, whether through a pet dog to introduce Natasha Lyonne‘s vet secretary, a diatribe about God that goes nowhere, animal cruelty, or Shanda’s homosexuality — which feels like a conscious decision simply so common-man America won’t waste time wondering why Jack doesn’t want to sleep with her — adding a girlfriend in Nikki Reed‘s Crystal, who brings nothing to the plot.

Some of what Dekker throws at us helps in his gradual psychotic break, but a lot works towards distracting us from him as well as setting up a climax that proves more forced than revelatory without ever letting Shanda question “peculiarities” in view of the audience. As the story progresses and the insanity crescendos with monsters crawling and hands reaching out of shadows, we become disoriented enough to buy it all as reality or fiction, depending on where Dekker decides to go. But just as the final crane shot lifts the camera above Jack’s childhood home to naturally open our eyes to spatial proximity, as well as the truth of what existed in the physical world and what in delusion, his final revelatory moment with Shanda feels artificial.

Maybe this was intended to separate fact from fiction or the product of rushing to deliver that “a-ha” moment. Regardless, it screeches things to a halt exactly when the tension was ratcheting up. Luckily, Culkin’s crazed performance saves a lot of the shakier moments with his emotional distress. Dead eyes and matter-of-fact delivery with a smile lend his words an eerie sense of dread. The distance from where he is at the beginning to where he ends isn’t as far as you’d assume, his blank-faced rage ultimately born from a secret he may have known all along. This is a mind reconciling past and present through a filter of hurt, his potential future a beacon of light extinguished, with his homecoming possessing much more than he bargained for.

While Dekker leaves things too esoteric, plot-wise, to spring a seemingly concrete resolution without warning, he never falters in tone. Even after we laugh at a tape recorder bouncing down the stairs like a slinky, what’s revealed keeps us on edge. Yes, there are too many revelations, for what we believe is huge ultimately pales in comparison to what caused the most psychological damage; we understand the confusion and anger in Culkin’s face. We also understand Teresa’s animosity (Shaye can be terrifying here) telling Jack what he doesn’t want to be true. He literally goes home to find demons waiting to pounce where love once existed. All his work to put feet on firm ground is uprooted by an unsuspecting deer on the road. Welcome to Jack’s repression.