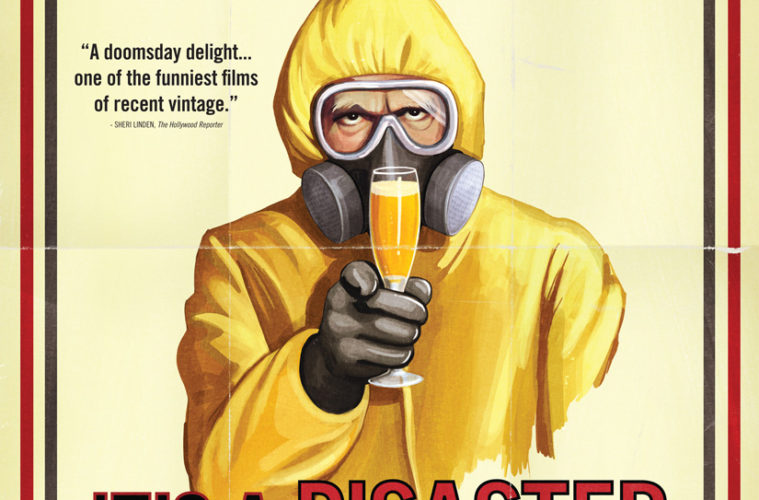 Even though the Mayans and 2012 have passed, filmmakers still appear utterly fascinated by the end of the world and our reaction to it. I’m not talking post-apocalyptic tales occurring years later—Oblivion or After Earth—I mean true “end is nigh” stuff like Rapture-palooza, Seeking a Friend for the End of the World, or This is the End. This is where true, unadulterated introspection is possible, when our feelings lay bare without threat of consequence since in a few short hours nothing will matter anymore anyway. We’ll begin to take stock in our beliefs, dreams, loves, and regrets as the seconds tick away; those final hours encapsulating how we’ve lived, how we wish we had, and whom we’ll be when the lights go out.

So why not set it during brunch? While Hollywood throws us into these impossible to comprehend situations right alongside the one unlikely hero about to serendipitously move into position to save us all, writer/director Todd Berger wonders how the other half will fare in his brilliantly dry comedy It’s a Disaster. While government officials, scientists, and soldiers rally the troops and suppress their emotions to solve what could be an unsolvable problem, people like you and me are stuck in our homes unaware to what’s happening with friends and family. We won’t automatically assume there was an attack when the phone, internet, and cable go down. No, we’ll be swearing aloud about how our provider is the worst corporate entity in the world.

This is real life—our coping with the fact we’re absolutely helpless in the face of annihilation. We’ll lock the doors and windows, pray we have enough provisions to survive until succumbing to the danger, and argue about what was and what could have been. We won’t be happily together in our little nuclear contingents as radiation nears our badly insulated homes. We’ll be scattered throughout the world without a way to connect. If anything, we’ll be nearby those we may not wish to meet our makers beside. Berger understands this and rightfully decides to add as many issues as possible to fully appreciate the humor, defeat, and silver linings available when we know there will be no fallout—pun intended—in the morning.

So we meet uptight Dr. Tracy Scott (Julia Stiles) and her new, extremely accommodating boyfriend of three dates Glenn Randolph (David Cross) turning off their car before entering a couples’ get-together without a real care in world. All the awkwardness of such a situation is present from his uncertainty with names and relationships of the people he’ll be meeting and her trying her hardest to mention the topics he should steer clear from. Emma Mandrake (Erinn Hayes) opens the door with a friendly rebuff of Glenn’s over-exuberant greeting before hugging Tracy so the circus can begin with introductions to the bohemian hippies (Kevin M. Brennan’s Buck and Rachel Boston’s Lexi), straight-laced nerds (America Ferrera’s Hedy and Jeff Grace’s Shane), and the preoccupied man of the house Pete (Blaise Miller).

From here Berger’s script possesses an authenticity that feels as though rooted in improvisation—a possibility since the bulk of the acting talent is from comedy troupe The Vacationers. They each have a stereotypical character trait to set them apart and perfectly expand upon them once the gravity of the situation is apparent. It’s no surprise when Shane becomes paranoid about a zombie/mutant apocalypse and enemy conspiracy theories after his main goal for the day was to purchase a limited edition comic book online. For Hedy, complete catatonic shock transforming into Breaking Bad-type household drug manufacturing is believable considering her field of chemistry allows her the unfortunate position of fully grasping what they’re facing. These are real over-reactions verging on the obscene one would expect.

The characters also serve as a great springboard towards intrinsically funny-because-they’re-serious topics like marital woes, commitment phobia, and the love of The Wire. We have the free-spirited monogamy-challenged infringing on the ‘happily’ married, the bad lucked lonely who won’t get the chance to see what the future holds, and the stagnant co-dependents waking to the fact there was more to life than past promises. And while Cross’ Glenn serves as our entry into the story due to his status as newcomer, it doesn’t mean he won’t reveal his own eccentric proclivities by the end. All these suburban clichés have hidden secrets and aspirations only made acceptable conversation when mortality looms large. And their open cynicism towards neighbor Hal’s (Berger) preparedness with a HazMat suit? Exactly how I would have responded.

A lot happens during the course of this brunch as stakes rise higher and their non-hermetically-sealed world becomes infringed upon by outsiders. Tough choices are made as true colors surface. But no matter how difficult the situation Berger’s sense of unavoidable levity remains because we all retreat to nervous laughter and sarcasm in the face of fear. And despite its pitch-black ending crescendo perfectly mirroring the opening joke between Cross and Stiles, I realized my familiarity with having “seen it before” was towards the resonate characterizations and not the plot itself. Full of laughs and desert dry delivery, It’s a Disaster is exactly what you’d expect from a dinner party atmosphere. America’s destruction simply adds a complexity with which to cut through its inherent lies.