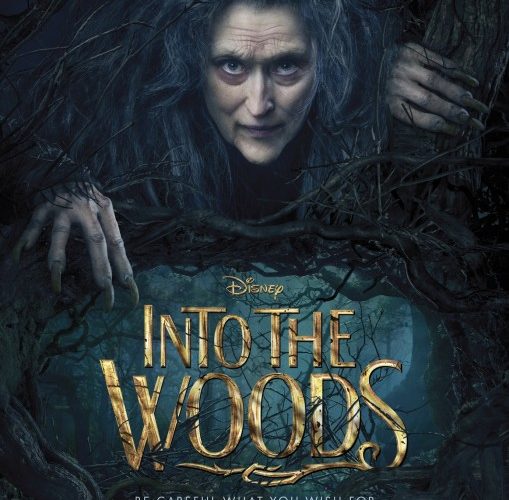 [Review] Into the Woods

The involvement of Disney on any adaptation of beloved source material can’t help being a double-edged sword. On the one hand their clout and financial backing will ensure the production looks fantastic and attracts the type of talent worthy of the property. On the other their brand brings with it a very specific morality code and target demographic. What this means is that something as dark as Into the Woods and its satirical take on all our favorite fairy tales playing up the lecherous sexuality of princes and wolves along with the ruthlessness and selfishness of supposed kind-hearted people on a quest to have their wishes come true is bound to get rendered a tad less suggestive. These aspects are retained, but that coveted PG family-friendly rating demands their full purpose be watered down or excised completely. This reality seemed all but assured for fans of the original Tony-award winning musical led by the incomparable Bernadette Peters who followed the behind the scenes news these past couple years. Gone would be the fun of showing its audience the true horrors embedded within Cinderella, Rapunzel, and Little Red Riding Hood and in its place we’d find two brand new songs meant to showcase the cast at the detriment of the story. Whether it was director Rob Marshall and/or Disney realizing what a mistake it would be to wholly neuter exactly what it was that made the work so appealing in the first place or a direct result of fan backlash or perhaps even an example of the rumor mill simply getting it dead wrong, the finished film proves much closer to the source than expected.

Adapted by book writer James Lapine himself—with Stephen Sondheim working closely to approve changes and pen those new ditties that were ultimately cut—Into the Woods retains its edge and Freudian humor even if it loses some of its trademarked panache. While a key death is removed, the Mysterious Man absorbed, and the more salacious escapades alluded to off-screen, the script is otherwise pretty close. Not being a devotee and only having seen the live version performed by amateur theater troupes, I actually believed it exacting to the letter until a plot summary online jogged my memory contrarily. So unless you religiously know the musical front to back, there probably aren’t many glaring omissions to diminish your enjoyment. And it should win over the virgins in the audience who won’t know better anyway. The problems lie in the pacing and tone. For many stretches I found myself growing bored as though wading through a cultivated atmosphere that didn’t quite get the play’s true intent. It’s rendition of “Act One Prologue” is superbly done, however, introducing the myriad characters about to become embroiled in the same forest-set adventure from Cinderella (Anna Kendrick) hoping to attend the Prince’s (Chris Pine) ball; the Baker (James Corden) and his wife (Emily Blunt) seeking to break a batty witch’s curse (Meryl Streep) on their house to birth a child; young, simple Jack (Daniel Huttlestone) journeying to sell his cow (and best friend) Milky White; and little Red (Lilla Crawford) skipping down the path to her grandma’s house. The visuals draw us in, the singing is spot-on, and you find yourself getting lost in the magic.

But then a few jokes arrive and fall flat in their seriousness. An example: Corden and Blunt staring where Streep’s witch just vanished in a theatrical whirlwind—meant to tickle the audience—as though they’re truly frightened of what’s to come. Rather than play moments like this broadly, their attempt to display the drama of their circumstances makes it hard to feel secure laughing. Not until Pine and Rapunzel’s Prince (Bill Magnussen) kill it with “Agony” was I able to breathe easy and smile unfettered. It’s not always about reading the same lines and singing the same songs, Marshall needed to inject this sense of playfulness throughout rather than luck into it when the lyrics themselves can’t help but be goofy. Fairy tales are inherently dark—the point is to laugh at this truth, not be fear it. The visuals are almost too good as well because part of the musical’s charm is the inventive way in which things are created onstage to minimalistic effect (I love the wooden cow). That’s not to say the way the Giant (Frances de la Tour) is portrayed with its head cropped off the top of the screen isn’t a brilliant use of the medium’s own limitations, it’s just a little less fun. And it isn’t as though the filmmakers couldn’t have skewed away from computer effects more. Red’s recounting of her consumption by the Wolf (a hammy Johnny Depp who thankfully didn’t get the severity memo the rest did) is done with sheets and silhouettes after all. You can’t have it both ways—aesthetically or tonally. There’s too much back and forth to gain a sure footing.

I won’t fault any of the actors from doing exactly what it seems Marshall has tasked, however. They don’t all possess the bite I’d like with some of the funniest lines coming so dryly you forget to laugh, but each has his/her moments. Streep’s delightful if oftentimes overbearing opposite the much straighter Blunt and Corden; Huttlestone brings the same colorful voice and fire he did in Les Misérables; Crawford’s Red is joyfully sassy; bit parts from Tracey Ullman as Jack’s mother and Christine Baranski as Cinderella’s stepmother are memorable touches; and the scene-stealer among them is Pine, obviously in love with every minute of his cheesy lothario. So while the orchestration is lacking despite its pieces and essence remaining mostly intact, the best-case scenario is that this adaptation exposes new generations to explore the original’s uncensored glory.

Into the Woods opens wide on Thursday, December 25th.