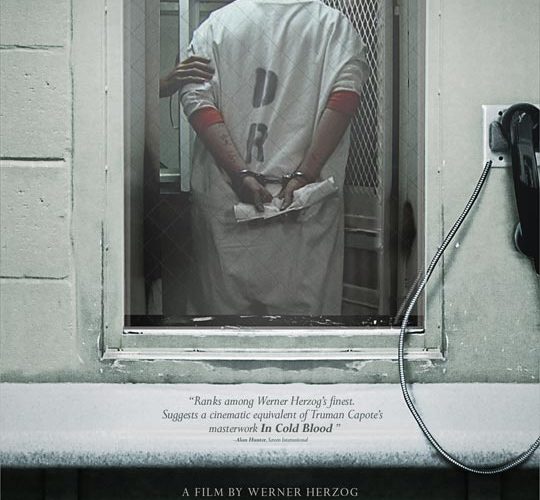 [Review] Into the Abyss The subtitle of Werner Herzog‘s searing documentary Into the Abyss — A Tale of Death, a Tale of Life — sets up expectations for a film that is equal parts harrowing and uplifting. Yet as dutifully even-handed as Herzog‘s presentation is, it’s nearly inconceivable to imagine the director’s obvious appreciation for human life washing away the utterly shattering nature of the story at hand. It’s this precisely downbeat message — that, no matter how treasured human existence can often times be, the dark will always overshadow the light — that I took away from the film. And it shredded me to pieces.

Comparisons to Truman Capote‘s seminal piece of true-crime storytelling, In Cold Blood, have already been noted by several critics, and the similar vibes are indeed undeniable. The crime at the center of Herzog‘s examination of the death penalty and its ramifications is apparently just as shockingly senseless as the one central to Capote‘s work. It involves three people being mercilessly murdered for nothing other than the illicit acquisition of a shiny red car.

The two criminals at the forefront of Into the Abyss are Michael Perry and Jason Burkett, both of whom, in some way (their versions of the story differ substantially), were involved with and convicted because of their participation in a triple homicide case in Conroe, Texas in 2001. The former, only 28-years-old, appears in the film with only eight days to go until his scheduled execution. The latter, who was not sentenced to the death penalty, will, nevertheless, potentially spend the rest of his life behind bars.

Herzog’s other interview subjects also prove crucial to the film’s relentless emotional intimacy. Burkett’s father, for example, is another lifetime criminal, and his reflection on his life’s doings – culminating in an unbearably frank confession in which he describes the lowest point of his existence, when he shared seats with his son on a prison bus – provides some of the film’s most vulnerable moments.

Another presence in the film worth nothing is Fred Allen, a former overseer of Texas’ executional operations. During his tenure, he supervised the execution process for over 120 people. His meditations on those experiences – as well as his explanation of why he suddenly retired after the death of Karla Faye Tucker, the first woman executed by the state of Texas, are as pivotal and crucial as anything else in the film. And the way they both compare to and starkly contrast from the film’s prologue – Herzog’s brief conversation with a priest – sheds fascinating light on the subject at hand.

And that subject is, of course, the principle of the death penalty. Though Herzog makes it clear from the get-go that he’s not in favor of capital punishment, that doesn’t keep his portrait from being steadfastly balanced. The sister of one of the triple homicide’s victims, for example, states frankly that it felt cleansing for her to see Michael Perry put to death before her eyes, whereas Allen, numbed by his years of mechanical orchestrations, is now thoroughly convinced, like Herzog, that no human being deserves to be killed in this manner. And because of Herzog‘s unwavering anchor, we can sympathize equally with both perspectives.

What struck me most about the film, though, was not the spurring of a contemplation of the death penalty that will likely be its effect for many viewers. Both before and after seeing the film, I, from my microscopic perspective, happen to be against the notion of the death penalty, and I only needed to take one look at Burkett’s father – who’ll the spend the rest of his life tearing himself apart behind bars due to his monumentally poor foray into fatherhood – to convince me that a life sentence is a more meditative, meaningful, and appropriate punishment than a hurried execution. But the most unexpected and revelatory aspect of the film’s impact is in the way it objectively documents the absurd and senseless nature of our world. Herzog speaks shortly, at one point, with a Conroe native who recalls an incident in which he was gutted with a screwdriver the size of a ruler. As he remembers this occurrence, he stares into the camera with a steady, unflinching gaze, as if this event is some kind of expected side effect of life itself.

Also embedded within Into the Abyss are the ultrasound photos of a newborn baby, the moving love-at-first-sight connection between Burkett and his newly-cemented wife, and the life-affirming image of a beaming sun poking its head through a sea of tall trees. But what I’ll remember most is the description of Burkett and his father getting transported together as mutual convicts, the anonymous gravestones of Texas’ executed criminals, and the fact that three innocent people were killed in the name of an automobile. These are the kinds of things that stop you in your tracks and make you reevaluate the world we are living in. Certainly, in my estimation, one of the most profound impacts a film can have.

Into the Abyss: A Tale of Life, a Tale of Death hits theaters Friday, November 11th.