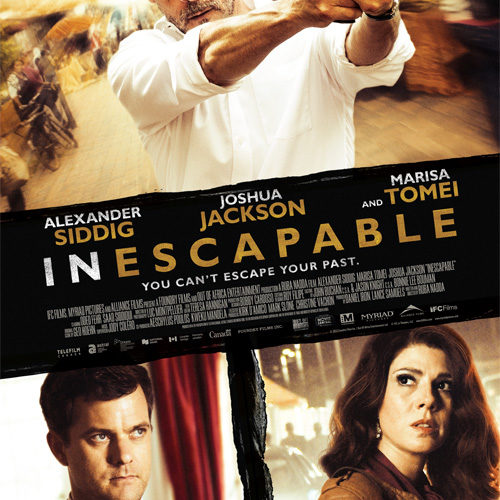 Acclaimed Arab-Canadian filmmaker Ruba Nadda follows her festival winning romantic drama Cairo Time with the mystery thriller Inescapable. It’s new territory for the writer/director in that its love story has already occurred, been thwarted, and had its central pairing move on. Whereas one could see Nadda weaving the tapestry of Adib Abdel Kareem’s (Alexander Siddig) early years in Damascus with his love Fatima (Marisa Tomei) amidst the war-torn city’s police occupation’s paranoia, this chapter in her lead’s life is a different beast altogether. A mix of The Debt and Taken with a lot more drama and a lot less action, we follow Adib as he confronts the past he hoped had been buried by twenty years of a new Torontonian life. His daughter’s inexplicable kidnapping in Syria, however, brings it all flooding back with nowhere left to hide. Nadda introduces her character with wonderful duality. We watch Adib at work interacting jovially with coworkers and even integrating a flourish of his secretive youth by picking a file cabinet lock for a struggling secretary. All seems mundanely idyllic until an anxious old friend catches his eye on the escalator out. In a panic Adib learns his eldest daughter Muna (Jay Anstey) has disappeared in Damascus. Unaware she was even there as the young photojournalist was supposed to be on assignment in Greece, the implications of her visit conjure the kind of temperament we didn’t think possible from his previously amiable demeanor. Knowing he must return to a country that no longer welcomes him, his search for Muna opens old wounds while providing the answers he’s spent two decades running from.

Needing Fatima to smuggle him into the country, Adib arrives to counteract the volatile atmosphere he remembers well. With multiple factions of secret police on high alert for spies and foreigners, he knows the Canadian embassy can do little more than follow protocol and pray someone’s kind enough to help. Where embassy contact Paul (Joshua Jackson) can only make phone calls and file paperwork, Adib tries to rustle up the network of powerful friends he left behind to cut between the layers of subterfuge and discover where Muna has been taken and for what reason. The catch is in the new world order of things and the precarious positions these former acquaintances find themselves. Adib is enemy number one for reasons still unclear so assistance must willingly swim murky waters to be effective. A lot is happening in Damascus behind the scenes and Muna’s visit—while dangerous in and of itself—comes with even more risk considering her father’s true identity. After Adib fled to Canada, the people he left behind tried to rebuild their lives in his absence. Sayid (Oded Fehr) used his name as a way to ascend the ranks of the Syrian government, Detlev (Danny Keogh) disappeared into the shadows as a fixer with infinite connections, and Fatima did her best to start over once the realization Adib wasn’t returning sunk in. They all played a part in their friend’s reputation being dragged through the mud with accusations turning him into a traitor and yet welcome him back without an urge to call the police for his arrest despite mixed emotional responses to his return.

There’s more than meets the eye as far as the circumstances leading to his escape and it now seems Muna’s fate rests in his hands. With the name Abdel Kareem now carrying disgrace, her ignorance of this fact allows her to become trapped inside a corrupt system where everyone is guilty until proven innocent. Adib’s attempts to shield his family from his previous life have now risked destroying them if he cannot use his knowledge of the area to make them whole. But as more characters are introduced, more mystery is uncovered. Everyone seems to have a present connection to Muna along with one to Adib’s past. Everyone is keeping a secret that may lead to the girl’s whereabouts while also possibly incriminating themselves in the crime. Well acted from the ambiguous duality of past acquaintances to the malicious confidence of the one true villain (Saad Siddiqui‘s Halim), Inescapable is Siddig’s to carry. Onscreen for every scene of the film, his Adib is the constant bridging his colliding worlds. We see the love he has for his daughter and understand nothing short of death will stop him from finding her. We believe his feelings for the wife he wished would never learn about who he once was and can’t pretend to ignore the obvious chemistry with his old flame Fatima upon his return. Love and lust also become his partners as Fatima and Paul’s willingness to help possess investment levels exceeding pure curiosity. They provide Adib resources to use and abuse as he selflessly looks to pay for his mistakes in place of his daughter.

He moves forward with his mission without regret and gets mixed up in physical pursuits and hand-to-hand combat—things a desk job have made him rusty in. Nadda’s filming of this action is clumsy with a desire for cool tricks that feel cheap and fake, taking us out of the film for however brief the spurts. It’s a shame because the dramatic moments don’t. This is something Tomei unfortunately falls prey to as well when the effective make-up job and accent transforming her into an Arab can’t mask her celebrity. Her performance is a great metaphor for the film as a whole with its valiant attempts proving unable to quite live up to expectations. It’s an entertaining exercise outside her comfort zone and I do hope shows Nadda’s desire to continue expanding her cinematic language.