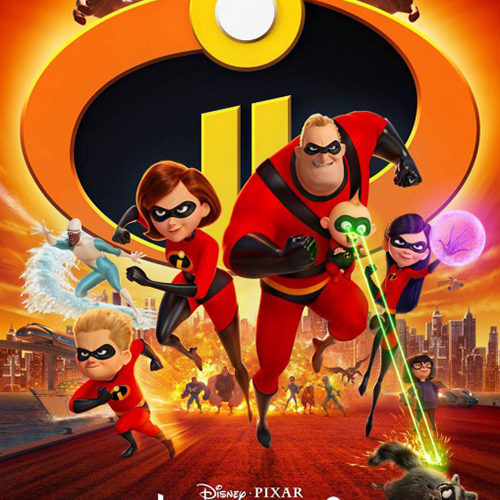 Review: ‘Incredibles 2’ Narrows its Focus to Become a Super Sequel

“The thing is that many sequels are cash grabs,” Brad Bird said earlier this year. “And there’s a saying in the business that I can’t stand where they go, ‘You don’t make another one, you’re leaving money on the table.’ Jesus, you know, money on the table is not what makes me get up in the morning. Making something that people are going to enjoy 100 years from now is what gets me up.”

Incredibles 2 might be a cash grab for NYSE:DIS, but, thankfully, not the artists behind the project. Here’s a rare sequel that matches the original by narrowing its focus. Instead of adding to the Supers’ milieu, its animators reveal new sides of the beloved family. Bob struggles with Jack-Jack’s new powers and Violet’s love interest as Dash’s motormouth and hot head adds to the tension. Mixing up the family dynamics creates a combustion of new scenarios that take the action and color palettes to a new level. By building on the Parr family’s dynamics — as opposed to adding new characters for story variation, the death knell of many a sequel — Pixar grounds their animated kinetics in a stronger foundation than your average superteam.

Taking place shortly after Syndrome destroyed the Parrs’ home, part two sees the family living in a motel and close to financial ruin. A company called Devtech, run by Winston Deavor (Bob Odenkirk) and his equally raspy, technocratic sister Evelyn, reach out to Helen/Elastigirl (Holly Hunter), Bob/Mr. Incredible (Craig T. Nelson) and Lucius/Frozone (Samuel L. Jackson) to help bring Supers back. Winston singles out Helen to lead the charge. Resistant to the idea, Helen works through her motherly FOMO by realizing she can be the breadwinner and provide for her family in a new way.

It’s the early 1960s and “The Feminine Mystique” ignited a second wave of feminism in the United States. Though not mentioned in the film, Helen’s decision embodies the second wave’s vision: equality of the sexes. In brief: the second wave demanded equality of opportunity for women in the professional and political realms. At the heart of Incredibles 2 is a swap of gender roles in the nuclear family. The kids have just as much difficulty adjusting as their parents. And in their attempt at parity, the Parr family find a way to be a Super family when faced with a fascist threat from within Devtech.

Fourteen years later – which feels like a century-worth in superhero films – Incredibles 2 needed to stand apart. Bird, making the Andrew Stanton-esque move of bouncing back from a live-action disappointment, does so by switching focus. In The Incredibles, Jack-Jack was a cute, ancillary character. Here, his development moves the story. The lead character’s choices are predicated on either what’s best for the baby or abdicating that responsibility. Even Edna Mode has a part to play in Jack-Jack’s development.

Jack-Jack gives a Jerry Lewis-level performance of pratfalls, tantrums, and laughter. His magnificent transformation from cute side character to an unstoppable, combustible, monster-transforming creature is a force of nature with which to be reckoned. His fight scene with a raccoon and imitations of Edna provide the film with its whimsical visual panache and humor.

Incredibles 2 is chock-full of questions about justice. The adults’ answers are often cynical, such as when Mr. and Mrs. Incredible say politicians don’t trust people who do good for no reason. Later they say a foe will receive little more than a slap on the wrist because they’re rich. It’s Violet, Dash, and Jack-Jack who ultimately save the day because of their lack of cynicism (which one could attest to their lack of experience) and love for their parents. This love – Jack-Jack’s self discovery of it and what the family shares with each other – is the primary emotional through-line.

Well over a decade is a long time to wait for a high-profile sequel. Brad Bird and company found a way to separate their story from the superhero pack by examining gender roles in marriage and political relations among professional women, and Pixar found a way to carry out that vision without making it feel didactic.