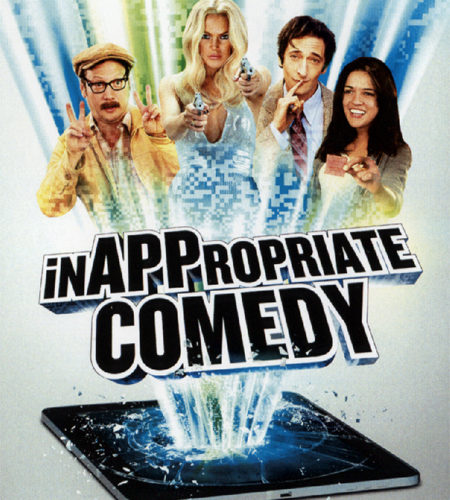 I should sue TV pitchman Vince Offer for false advertising: a comedy implies humor and potentially laughter, yet not one laugh is found within easily the worst movie of 2013. InAPPropriate it may be, although the emphasis on “APP” is a result of the film’s lame ass structure: Mr. Offer sits in an underworld, controlling our “experience” via a tablet PC of some sort (not an iPad, or he’d feel Apple, Inc.’s wrath). He switches between one unfunny, disjointed, and painful sketch to another. (I wish he had the Netflix app so we could watch something much better, or anything else really).

The whole affair left me shaken, disturbed, and angry. Two major festivals happened this month (SXSW and Ann Arbor) and many of those films will not find the kind of distribution this film has, arriving on 292 screens. This is not just an embarrassment for those involved, but I internally felt it as well. While the friendly folks of my neighborhood Clearview Cinemas wished me a good day, I kept my head down and kept walking, feeling worse than the walk of shame following a one-night stand. The film opens with a WTF moment: an unfunny parody of 127 Hours that leads somehow into Mr. Offer spying from the underworld on Lindsay Lohan’s underworld as she does a Marilyn Monroe impression (allowing her skirt to drift above a subway grate). At this point I should have asked if I could have had MoviePass “money” refunded, or perhaps they should revoke my membership for seeing this film.

I stayed and was treated to Adrien Brody as Flirty Harry, a hard cop who makes homoerotic references – including “Go head, make me gay.” Then cut to Blackass – the African American parody of Jackass, that essentially copies many of the same stunts, save for a somewhat mildly amusing stint in an abortion clinic that would have been much funnier if it was a bit on Howard Stern’s show. We also get Ari Shaffir as “The Amazing Racist,” a “reality TV”-style bit that isn’t nearly as funny as Sacha Baron Cohen, mostly because its lazy — at least Cohen has the balls to play these pranks on real folks exposing existing racism and hypocrisy. Here everything appears to be staged with actors and it gets old before we reach the end of the first Amazing Racist bit.

Shame on Freestyle Releasing, a distributor who apparently has very low standards (they distribute movies for a fee) and shame on American exhibitors who found 292 screens for this awful intellectual assault to debut on. This is exactly like the crap Vince Offer pushes on late night infomercials: a solution for something you don’t need (not while Spring Breakers is playing in the same complex). I can’t say it works even in doses, although it may be of interest to the Jessica Chastain character in Zero Dark Thirty — popping in a DVD of this movie is far less effort than water-boarding a suspect and, for all purposes, far less humane.

InAPPropriate Comedy is now in theaters.