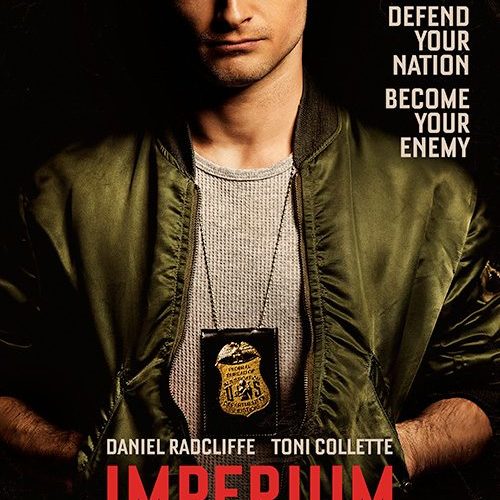 People forget that before 9/11 our idea of a terrorist was a lone wolf type: domestic white Neo Nazis with agendas that warped their intellect into working towards creating chaos to spark a cleansing. It’s therefore interesting to look at the constituency of Donald Trump, a candidate running on a ticket that not only incites race wars but also ensures white Catholics’ safety becomes synonymous with the “nation’s safety.” I guess the idea posed in The Turner Diaries may have been proven correct as each subsequent attack by locals, foreign agents, or both has brought us to this juncture in time. Fear and paranoia has set in, our sights focused on the “other” rather than ourselves. It’s a landscape ripe for a battle to destroy us all.

This is the world of Daniel Ragussis‘ Imperium, one where the theft of Caesium-137—a volatile, radioactive element—is of course profiled as an act of Muslim terrorism. But as the opening shows, that assumption can be easily falsified by unwitting entrapment. We want it to be the jihadist so we provide the jihadist the means to act. Would an angry young man mourning his homeland’s destruction abroad — while Mom and Dad enjoy McDonald’s here — have taken it upon himself to do that which undercover FBI agents facilitated? Maybe. But because his potential automatically makes him guilty we feel no remorse once we help him incriminate himself. It’s a pretty broad stroke and a damning bit of commentary on our law enforcement, but it makes its point clear. It’s therefore a tough sell for domestic terrorism agent Angela Zamparo (Toni Collette) to procure funds from her boss (Nestor Carbonell‘s Tom Hernandez) to make a case that Americans were responsible for the theft. She has a recording of renowned white supremacist radio host Dallas Wolf (Tracy Letts) provocatively alluding to the incident with threats of warfare and an informant expertly placed alongside one of his skinhead compatriots (Pawel Szajda‘s Vince). If she can talk fresh-faced Nate Foster (Daniel Radcliffe)—an idealist not yet jaded by stats and prejudice working as an analyst with little field expertise—to infiltrate their organization, she might solve the case while everyone looked elsewhere. Her new protégé volunteers because he wants to make a difference. Whether he can remains to be seen.

The story originated by Michael German and scripted by Ragussis is an intriguing one painting its agents of change as intelligent, charismatic, and unwavering in their determination. The filmmakers utilize ample deflection with multiple possibilities for the terrorism’s base of operations (Vince and his knucklehead crew of skinheads in Seth Numrich‘s Roy and Devin Druid‘s Johnny; Chris Sullivan‘s Aryan Nation leader Andrew Blackwell and his army of militant aggressors; and Sam Trammell‘s Brahms-loving suburban family man Gerry Conway), each a stepping stone for Nate to climb and approach Zamparo’s target: Wolf. As they set up from the start, though, Foster is a loner with a rough background like these racist bigots. He sees their humanity behind the warped surface rhetoric and hopes maybe he can bring them back. So Imperium does have a desire to infuse hope, Radcliffe’s FBI agent trying his hardest to pick out which characters in the organization may be able to come to their senses. He sees Roy ruining Johnny’s innocence, befriends Gerry as an equal seasoned in the finer things life provides, and genuinely hopes to help Blackwell set-up his compound in a way that minimizes casualties both for unsuspecting strangers and the men residing there. To him the only true monster is Wolf. Everyone else is happy spending their time with strong words and tough exteriors, but they’d rather have barbecues and protest than actually construct a bomb. Wolf is the radical spewing hate on the internet. He’s the one the FBI has a case to build around.

But just like the prologue’s jihadist, how much of this case is built on conjecture as opposed to irrefutable fact? How far has Nate gone to earn these men’s trust only to see it all potentially go for nothing if Zamparo was wrong? The question then becomes whether Ragussis will tell this story in the gray areas to point the finger at law enforcement’s tactics ruining lives on both sides of the law while wasting time/energy or if he’s using those mistakes to hide a truth anyone who’s seen a thriller can guess before the midway point. Sadly things ultimately reveal themselves to align with the latter’s purpose. Just as things get bumpy and tensions rise, a bow-tied resolution commences, devoid of stakes yet overflowing with heavy-handed message. Characters disappear completely as MacGuffins that could have been revisited to seem more important than pawns in the filmmakers’ game. New characters are introduced without context, their inclusion a by-product of the others being lost to the plot’s machinations. And the climax unfolds rapidly and without a hitch, the tension cultivated by so many moving parts earlier evaporating into a whimper that underscores all the good work Nate Foster did. Suddenly the complexities of this undercover agent’s empathy disappear too, his selling point to be the infiltrator pushed aside for a too-quickly manufactured appreciation for the job rather than the people. Ragussis tries to save face with a tacked on epilogue, but it’s too little too late. Nate’s individuality is usurped by success and it rings intensely false.

This is a shame because Radcliffe does a nice job portraying Nate’s intricacies. We feel his isolation and understand why Zamparo picked him as someone she could manipulate and the skinheads embrace. Szajda, Letts, Sullivan, and Trammell do great fleshing their own three-dimensionality too, each possessing a façade to enlist Nate to their personal causes while proving disconnected from each other and mostly unwilling to follow through on their mission. Once everything comes to light, though, we don’t stare in awe at the result. We instead lament how the filmmakers could throw interesting characters aside for what’s a by-the-numbers conflict paling in comparison. With so many skeptics attempting to ratchet up suspense, Nate gets close to his target less through good work and more the terrorist’s inexplicable naiveté.