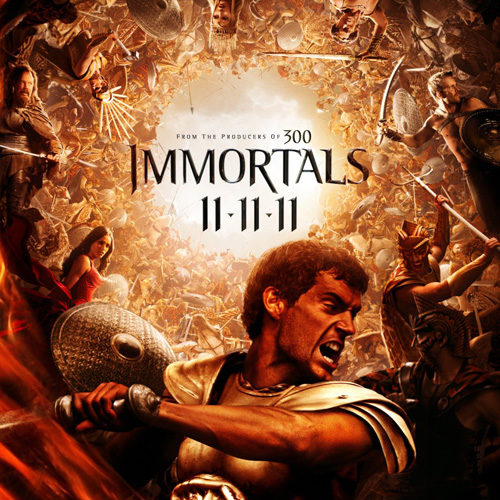 Director Tarsem Singh, the visonary behind one of the best films of the past decade, The Fall, as well as one of the most overlooked, The Cell, is not a director hesitant to stray from the mainstream. The Fall is as divisive as a film can get; the same applies to his pyschological horror film. Unquestionably, his R-rated adventure film, Immortals, will draw the same splitting reactions.

Tarsem is ambitious, and his intentions are an acquired taste. From his color palette to the costume designs, the director takes bold, visual leaps. Even if a choice or two falls on its face, the audacity is difficult not to admire. When the Indian filmmaker ignores the basic conventions of the “sword and sandals” epic, Immortals makes for a distinct spectacle.

For an obvious and understandable reason, with The Fall and The Cell, it is easy to only marvel at the unique visuals, but the storytelling is there. Unlike those two features, the story in Immortals is a problem.

It’s doubtful anyone will come out of the theater with goosebumps from the tale of Theseus (Henry Cavill, Zack Snyder’s Superman) which, for the most part, is a generic hero’s journey. The ripped and prideful hero starts off a peasant and winds up a leader or men and gods, driven for blood when war monger King Hyperion (Mickey Rourke) slaughters Theseus’s mother in front of him.

Hyperion, who Rourke paints as ruthless with a comic touch, is attempting to rule the world – who would’ve thought? Hyperion’s wife and child were killed and the gods did nothing, the key motivation behind his attempt to destroy the gods, by unleashing the titans to once again to clash with those who vanquished many years ago. That small touch adds a contrived slight shade of grey to Hyperion, and it also strikes a connection between the bloodthirsty villain and the story’s hero, but sadly never adds up to anything more compelling than a small footnote.

The character building for every character who’s name isn’t named Theseus comes second to looking cool in the vibrant world Tarsem has created. From the production design to the costumes, this isn’t your atypical Greek mythology tale. It’s all silly, but never self-serious or self-deprecating.

More than a few times, Tarsem embraces this ridiculousness to exciting results. From a twisted torture device to some good ol’ testicle smashing, the film outright commits to a B-movie sensibilitiy. What Immortals lacks in scope and a steadily-flowing narrative, it makes up for in style and violent, cartoonish and visceral battles.

Immortals is now in wide release.