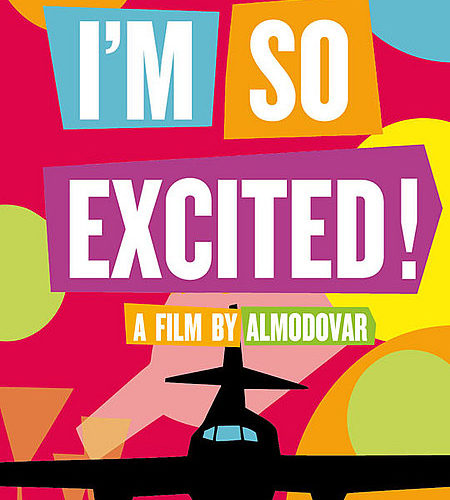 If you’ve ever taken an introductory Cinema Studies course, you’ll recall that the Italian Neorealists preferred uncharacteristic applications of sound, in particular a practice wherein dialogue would be spoken, by actors, and subsequently dubbed over in a studio. Though this, to such an extent, is uncommon in today’s cinematic climate, one quickly realizes the advantages potentially afforded: even the greats could stumble over a line and keep going with a scene, or maybe a clunky patch of scripting could, for all we know, be reworked with some careful editing and recitation. (Of course, you’ve got to get it right in the studio before sending a movie out for consumption, though let’s not doubt De Sica or Rossellini‘s prowess…) And while quietly enduring one of many preposterous, listless bouts of spoken comedy in Pedro Almodóvar’s I’m So Excited, I had begun to think of the film as some uncharacteristically knee-slapping Neorealist title from which the audio department had failed to scrub placeholder exchanges. The truth is that comedy can’t be distilled into a simple matter of “good” and “bad” — simply put, what makes one man laugh will readily put another to sleep — but, that being said, I’m So Excited brings with it a screenplay so inexorably unfunny that it fully, early dies on the table as if the operating doctor had been doing too much drinking the night before. Most dispiriting of all is how frequently Almodóvar relies on the crude for crudeness’ sake in some fundamentally misguided means of obtaining laughter: what began as a clearly delineated attempt to recall the earlier slapstick days soon devolves into lame exchanges regarding sexual contact — the longer these progress, the further I’m So Excited becomes the film equivalent of a comedian struggling to shock the crowd — and disgusting sights (licking semen off someone’s finger? honestly?) which attain no proper place within an otherwise clean aesthetic framework.

Chalk it up to those misguided means. The instigating conflict of I’m So Excited — first-class passengers handling the stress of a plane which, due to technical difficulties, cannot land — brings with it a dark undercurrent that, on paper, ought to grant Almodóvar yet another chance to explore human pathology while recapturing some personal youth. It’s even the opening impression, due in no small part to the establishing flavors — canted angles, dissonant rhythms in dialogue, satirical newspaper headlines, celebrities (i.e. Antonio Banderas and Penélope Cruz) causing harm to others through personal incompetence — that hint toward a comedy attuned to skewered perspectives on our everyday world, and during these initial incidents things appear to be on a proper course.

Formally, the proceedings rarely stray in the wrong direction: even as the written action fails to find any discernible center, Almodóvar and frequent cinematographer José Luis Alcaine milk an uncommonly large amount of atmosphere from the intimate physical territory of a first-class cabin, giving this interior an alternately appreciable bright color palette and full breadth of spatial operation. In a manner somewhat akin to David Cronenberg’s Cosmopolis (still a far superior work), angle choices and editing strategies — unfussy long takes, especially; a few of these seem to go on for five minutes at a time — constantly open the opportunity to look at something or other that’s unexpectedly new. In totality it’s a push-pull between concept and capture, most strongly exemplified by an in-cabin performance of The Pointer Sisters’ “I’m So Excited”: initially funny but, covering almost (if not all) of the entire song, soon out of gas, yet composed and performed with a notable variety from shot-to-shot that does not suck all else dry. But formal alacrity takes the role of formal reliance once the film is asked to revisit stock characters carrying out unmotivated conversations regarding supposedly “funny” things — e.g. bondage or anal suppositories, ar ar ar — only to soon swing toward a paltry attempt at personal drama, then back to comedy, while throwing in a character twist or two (because, while we’re still present…). The players (Spanish superstars and character actors alike) do what they can in thankless positions, at times even surmounting one-dimensional sketches through pure talent and letting light through, thanks to an expressive face or off-color line reading… until Almodóvar’s pendulum swings toward the dismal once more as an actress is commanded to violate an unconscious passenger’s body for personal sexual gain. Yes, yes, comedy is the most subjective of all expressions, but that’s not going to invalidate the question of why I (or anyone with a sense of humor more accelerated than that which belongs to an 11-year-old) should be expected to find this funny.

How oddly, sadly appropriate that as I’m So Excited fails to reckon a divide between content and form, it is, too, so strongly problematic and yet resolutely without much to facilitate worthwhile discussion. As Alberto Iglesias‘ criminally underused jazzy score rolled over Catch Me If You Can-style end credits, I could only produce a first thought by reminiscing on an infinitely superior jet comedy: “They bought their tickets. They knew what they were getting into. I say, ‘Let ’em crash.'”