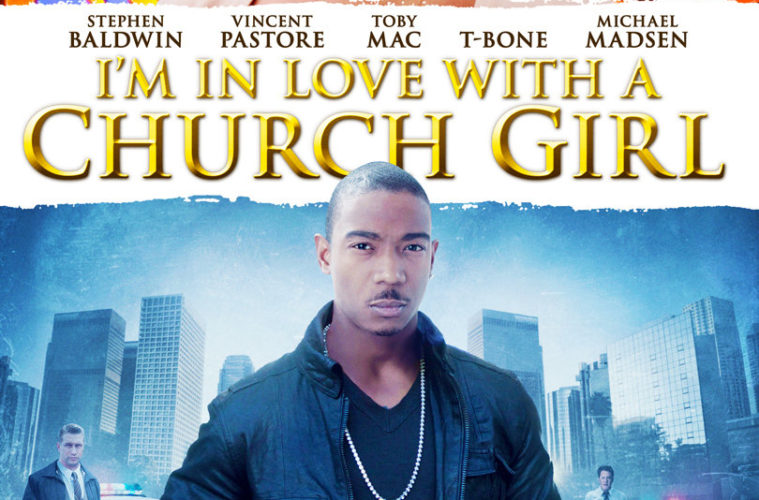 [Review] I’m in Love with a Church Girl

I’m in Love with a Church Girl is the worst kind of faith-based film; preaching the converted, it continually talks about a hip Christian life style as an alternative to a life of crime, but never digs deeper than that. It’s awfulness is underscored by a much better faith film released two weeks ago, Grace Unplugged. Directed by Brad J. Silverman, that drama features strong performances and a message that’s quite wonderful, following a young women whose faith is tested while she comes into her own shortly after her 18th birthday.

Church Girl stars Jeffrey ‘Ja Rule’ Atkins, a rapper popular in the early 2000’s headlining the record label Murder Inc. Mr. Atkins spent a good deal of the time since his peak popularity in and out of the system, and here’s his attempt at a comeback, I reckon. Atkins plays Miles Montego, a gangster who came up in the drug game, but becomes a legit music promoter; the only thing missing, however, is a partner. The film saves us from some of the darker elements of his Don Juan-esque life style, opting for PG-level partying. One day his life is changed and a beautiful stranger in a convertible saves him. He begins driving recklessly to find her but catching her at that moment isn’t in God’s plans. At a party with his financial advisor, played by Vincent Pastore, he’s introduced to this beautiful stranger, Vanessa Leon (played by a radiant Adrienne Bailon). She lives at home with three sisters, mom and dad, and manages a store that’s like a Christian version of Hot Topic.

The feds come crashing down on Atkins, monitoring his every move. Luckily Stephen Baldwin’s Frank Harris believes in his conversion, after observing him closely and Montego is spared. As you guessed it, there’s an awful lot going on here, plot-wise, but also very little. The story is paper-thin and one note, much like Ja Rule’s performance and his previous rap career. The main problem is how little Vanessa is developed; there is nothing under the surface — she’s simply a manic pixie bible girl.

I’m in Love with a Church Girl is, shamelessly, a commercial for Catholicism verses an actual film with substance. This is the most faithful film of faith I’ve ever seen, in that every scene a conversation involving God comes up, including faith-based consumerism (after all, Vanessa runs that store and hooks Miles up with some new faith-based pop music). It’s no wonder the film credits “God” as executive producer. Faith-based cinema is often regional, funded with large donations to counter secular entertainment. They range from large studio funded enterprises from Fox and Sony to independent companies like the one run by former Republican presidential hopeful Rick Santorum to very small enterprises run by individual churches. They are often born out of content created and sourced for Catholic television. With these kinds of limitations, these films can feature strange production values, uneven performances, and other technical imperfections. Yet this really isn’t a film at all, so much as a recruitment tool for Hispanic and African American youth.

Consider the arrival of Pastor Galley, the hip preacher at the church. He drives a Lamborghini (so much for a vow of poverty) and the film’s so selfish that they never mention starving people or the poor in general. The service these folks engage in is strictly to God and to the economy of God, consuming hip products, featuring cross-centric logos. Galley is played by the film’s writer and producer Galley Molina, who has a fascinating true story as a drug trafficker who found faith. His real story, or even one with a PG-13 rating, would make for an interesting film. Perhaps the problem with this work is it’s trying very hard to make faith sexier than the Scarface lifestyle (hence its PG rating, shying away from the harder edges).

What we have is a romance that glosses over some of the cultural issues of falling in love with a church girl that might otherwise be interesting; this includes Vanessa’s horror that Miles, nearing 40, isn’t a virgin. So much of these emotional beats are underscored with unnecessary music as well, which is a shame because, although Ja Rule isn’t a great actor, individual scenes may work; if only director Steve Race had faith.

I’m in Love with a Church Girl is now in theaters.