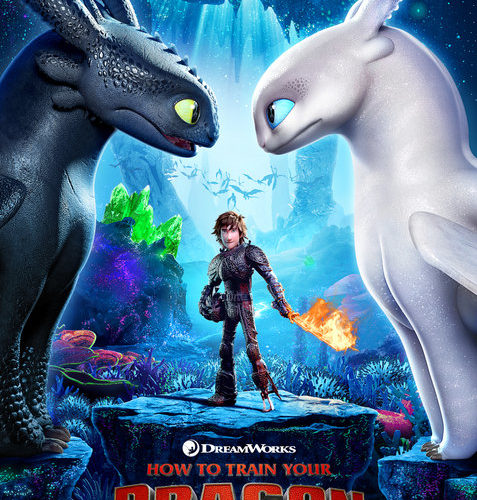 Review: ‘How To Train Your Dragon: The Hidden World’ is a Satisfying Final Chapter

It’s not often a studio as big as Dreamworks goes on record to say the third installment of a critically acclaimed series and box office success will be its last. Why paint yourself into a corner like that when the possibility for more is right at your fingertips? Dare I say the answer is integrity? That’s not a word you hear much in Hollywood, but I have to believe it’s the reasoning behind Dean DeBlois’ adaptation of Cressida Cowell’s How to Train Your Dragon. At a certain point the only reason to keep going is to cash in while the law of diminishing returns sets in quickly. So why not pump the brakes, iron out a thematically satisfying arc, and deliver a trilogy worth remembering?

Maybe it helps that this cinematic franchise has only been a “modest” hit at just over a billion dollars after two chapters. The decision to wind things down and ensure narrative purpose over pure entertainment isn’t so hard to stomach when you aren’t printing cash (by comparison, the first two Toy Story films made over half that amount almost two decades ago). It’s not like there aren’t ten-plus books to draw from—Dreamworks could have milked this property dry without breaking a sweat. So while kids may be disappointed they won’t be seeing more adventures with Hiccup (Jay Baruchel) and Toothless the Night Fury on the big screen, you have to respect the fact that they received the best version anyone could have ever hoped to see.

Part One introduced us to the Isle of Berk and its Viking inhabitants hell-bent on slaying dragons until the oft-dismissed son (Hiccup) of a heroic chief (Gerard Butler’s Stoick) showed them a different way. Without the threat of weapons, dragons could be put under wing like a loyal dog to serve as best friend in life and partner in battle. Part Two saw Hiccup and his newly integrated home standing their ground as dragon saviors against an evil foe seeking to control them all. There’s a happy reunion (Cate Blanchett’s Valka returns to the fold as the mother who disappeared twenty years earlier) and a tragic death leaving an uncertain young man holding a crown he hoped to honor with courage. And now arrives The Hidden World.

Hiccup’s current troubles stem from his desire to free all dragons from captivity. Unfortunately, he and his friends (America Ferrera’s Astrid, Jonah Hill’s Snotlout, Christopher Mintz-Plasse’s Fishlegs, Kristen Wiig’s Ruffnut, and Justin Rupple’s Tuffnut) keep bringing them back to Berk. This is an unsustainable solution where infrastructure is concerned alone, but having so many dragons in one place also creates a tactical problem. The more poachers they steal from, the larger the bull’s eye on their backs. Eventually a vicious hunter thought retired is hired because his specialty just happens to be killing the exact monster leading the charge of justice. Grimmel (F. Murray Abraham) is cunning, ruthless, and forever two steps ahead of his opponents. And his singular goal in life is to render Night Furies extinct.

With Toothless now serving as King of Dragons (the alpha), Grimmel need only capture him and coerce him into making sure no one interferes. By using a Light Fury—the female counterpart to this rare breed—as bait, the latter can be accomplished. Her inclusion goes much further, though, since the bond these two dragons create is real. Suddenly we have a natural split of attention for both Hiccup and Toothless in opposite directions that their own kind must also accept in their hearts. Because while harmonious living sounds utopic, there will always be another villain desperate to ruin things. Hiccup believes that finding the mythical “Hidden World” is a solution, but can mankind really be trusted to do right by dragons in their natural habitat?

Who’s to say that isolating Berk from the rest of the world won’t inevitably foster the creation of an antagonist from within? Hiding from outsiders doesn’t extricate the human instincts within us. That greed, rage, and bloodlust remain even if eyes have been opened to a new dynamic. Friendly relations with dragons still means putting a saddle on them and utilizing concepts of ownership. Maybe they are free to live without being hunted, but they aren’t free. That’s a very complex difference and one I’m impressed to see unfold in a children’s film. A similar trajectory plays out in Ralph Breaks the Internet, but DeBlois does it with a lot more nuance here. Being our truest selves sometimes means saying goodbye to the ones who made it possible.

With that come themes of new horizons whether home or love. Berk was built as a fortress to defend itself from dragons and thus no longer is suitable to its citizens’ current needs. Stoick ruled alone because he lost his wife to an attack, but Hiccup doesn’t have to suffer the same fate if only he lets Astrid in. At a certain point these Vikings began using dragons as a crutch to forget their own power and ingenuity. That’s why we see them running headfirst into battle knowing they have a safety net if something goes wrong. The opening action sequence is simultaneously invigorating and hilarious with the camera swooping in and out of the battle as though a single shot of close calls, luck, and hubristic might.

It’s this comfort in half-plans that Grimmel exploits. He counts on the deep connections Hiccup and his friends have with their dragons to let them act emotionally rather than intelligently. Like most instances of this strategy, though, that love will ultimately also prove to be the advantage they need to defeat him. That love lends them the clarity to know what they must do at the end and builds the capacity for DeBlois to earn the tearful send-off he’s provided. With a beautifully rendered epilogue augmenting the tough realizations that occurred beforehand (Hiccup and Astrid seeing the wonders of the “Hidden World” only to instantly know it could never be theirs), this trilogy secures our respect as a crowning achievement in animated cinema that should stand the test of time.

How To Train Your Dragon: The Hidden World opens in wide release Friday, February 22.