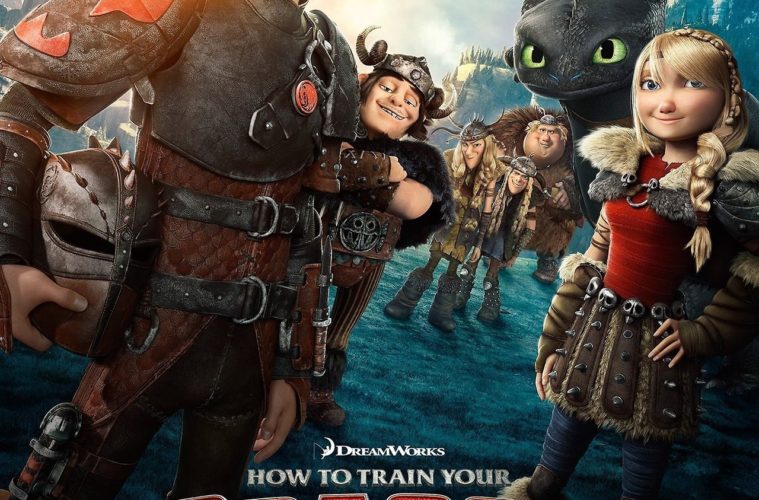 [Review] How To Train Your Dragon 2

I can still remember those childhood movie moments that forever solidified my love of the cinema. They were found, unsurprisingly, in pictures we would describe today as family films; the breathless ride along the beach in The Black Stallion, Christopher Reeves breaching Earth’s atmosphere for the vastness of space in Superman, and those tenacious kids heading into the sky on their bicycles in Spielberg’s E.T. They were moments of visceral freedom, unshackled by mundane reality and grounded in movies that made us believe in their emotional truth. It is rare—although not unheard of—to find their like in the current cinematic landscape, where big budget pictures are so busy trying to manufacture wonderful images and effects that there’s no time to instill a sense of that wonder in the audience.

What was so refreshing about Dreamworks original How To Train Your Dragon is that it offered up a stirring combination of grand spectacle and gentle imagination, working together to deliver a family-friendly adventure that expanded beyond the aims of a simple kid’s film. The relationship between Viking teen Hiccup (Jay Baruchel) and his beguiling dragon cohort Toothless was the backbone of the film, brought to vivid life by a bevy of animation artists and presented as a realistic bonding between human and animal. Directors Chris Sanders and Dean Debois used that team-up to disrupt the world they created—a secluded Nordic rock where Vikings and dragons battled in endless stalemate—while establishing a fearless sense of escapism in the movie itself. The good news is that How To Train Your Dragon 2 has been created in the same spirit, and although it chases after the elusive call of franchise, it still remembers to be wonderful where it counts. When we last left the scrawny, high-pitched Hiccup, he had united the worlds of dragon and human on his home of Berk, winning over his imposing father, Stoick the Vast (Gerard Butler), nabbing the heart of the fetching Astrid (America Ferrera), and losing a leg in the process. It’s four years later, and just as the world around Hiccup has changed, so have the expectations for this series, which marks Dreamworks biggest player in the recent franchise sweepstakes. Dragon 2 wears the studio’s big intentions right out there on its sleeve, and Hiccup himself can relate. The young Viking may start the film soaring across cotton-candy cloudscapes and discovering new lands, but Stoick has other plans for his grown-up son and they involve taking the mantle of clan Chief when he steps down.  Like its curious and intrepid hero, Dragon keeps wandering off from blockbuster responsibilities to chase the fancies of its big, beating reptilian heart. The fantasy action has never been more exciting or visually impressive, but it repeatedly takes backseat to character relationships, which develop on several new intriguing fronts.

Hiccup and Toothless still sit at the center of this world, but its edges have expanded to include more dragons, and to the Vikings’ surprise, more dragon riders. The young hero and his Night Fury friend find their freedom threatened by a new force; Drago Bludvist (Djimon Honsou), a mysterious warrior raising an army of dragons for conquest of the realm. Bludvist, who acquires his dragons courtesy of opportunistic trapper Eret (Kit Harrington), has a tumultuous previous history with Stoick the Vast. When the Viking leader warns his son of the dangers of engaging the likes of Drago, Hiccup ignores such wisdom and strikes out to persuade the warlord otherwise. If he could change the minds of Berk with the truth about dragon behavior, then perhaps he can reach Bludvist as well. If this weren’t enough, Hiccup also discovers another collector of dragons, this one a solitary rider named Valka (Cate Blanchett), whose secret will change his future as dramatically as that first encounter with Toothless did years earlier.

From discussions about the dark and light sides of dragon-riding to flaming swords and blindfolded displays of faith, Dragon keeps offering up moments that hearken back to a certain other fantasy franchise taking place in a galaxy far, far away. If that climactic struggle with a hulking winged behemoth in the first film called to mind Star Wars: A New Hope’s rally against the Death Star, then the sequel will fill fans with memories of Empire Strikes Back, complete with a frozen ice realm, towering marauder beasts, surprises involving lost parents and a decidedly increased sense of danger and darkness. At times, all this event threatens to drown the movie in spectacle, but DeBlois navigates the tricky tropes of the genre and comes out on top with his characters and adventure intact.

What continues to set Dragon apart from the current crop of American animated pictures is the careful and fastidious devotion to world-building. The visual element of the film is, simply put, jaw-dropping and the filmmakers have truly delivered the kind of movie that could only be achieved through the freedom of animation. The dragon flying scenes retain that giddy sense of innovation and kinetic motion, but they also make use of an exaggerated sense of space and momentum. They don’t simply feel like looping roller-coaster rides but plummets through a real, thriving world of icy mountains, frothing seas and harrowing hurtles past massive jaws of dagger-sharp teeth.

Beyond that, the humans and their scaly charges share a real sense of history and relationship. In one delightful moment, we watch an improbably large behemoth surge upwards from a frigid sea to deliver a trawler-sized mouth-full of wriggling fish to a hungry clutch of diving dragons. In Berk, a mutual symbiosis has taken hold, leaving dragons such an entrenched part of the culture that they factor into a new Quidditch-style game that involves tossing sheep through the air into baskets. Valka has been living with these creatures with more than a decade, and understands them as a naturalist and friend; her own style of dragon-riding is graceful and beguiling, her flying steed a multi-winged force of nature that stirs Toothless’ competitive spirit. When the battles get underway, there’s an immersive quality to the skirmishes that ensure even a titanic sparring match between two giant beasts happening in the background has as much oomph as that last monster fight in Godzilla.

If this carefully crafted universe wasn’t driven by characters we cared about, the whole enterprise would feel hollow and forced. The truth is, though, that we do care about Hiccup, Toothless, Astrid and Stoick and the sequel gives us new reasons to be invested. Baruchel continues to do fine, understated voice-work as Hiccup, and his clear affection for his dragon friend elevates every scene between the two. Ferrera’s Astrid is good at lifting herself above the usual requirements of the love interest to take center stage in the primary drama. Hounsou makes for an intimidating and uncompromising villain, while the likes of Jonah Hill, Kristen Wiig, Christopher Mintz-Plasse and Craig Ferguson manage the comedy concerns well enough. It’s Gerard Butler and Cate Blanchett, though, that really register in this outing, and the melding of animation, pantomime and vocal performance is perhaps some of the best I’ve ever seen in a film like this. There’s a sensational emotional moment between Stoick and Valka—staged as a cautious, imploring serenade—that transforms into the most joyous sight of the entire film, as two people with much time passed between them reconnect.

If there’s any element of Dragon that’s weak, it’s the forced nature of the comedy this time around. It’s not that these interludes are badly written, but rather that they feel like the least necessary piece of a series that’s started to evolve beyond them. I’m not talking about some of the natural mirth that exists between Hiccup and Astrid or Stoick and his mate Gobber, but specifically material like the numerous pratfalls and the romantic overtures of Ruffnutt and her would-be suitors Snotlout and Fishlegs. Some of this, like an inclination towards dragon-inspired slapstick, has surely been grafted on to keep the wee little ones engaged and distracted while the story chases more serious concerns. There’s a third act moment that is heart-wrenching and vividly realized, and its aftermath ushers in a new level of growth for the characters and the series. Against such material, the generic goofing-off seems stale.

At the end of the day, I enjoyed How to Train Your Dragon 2 more than any of the summer event pictures to date, and in fact, as much as any mainstream film I’ve seen this year. In its best moments it hearkens back to a different caliber of family film, and if it’s on a franchise trajectory, maybe that’s not so bad. If every installment can capture the same sense of escapism and passionate dedication to its ideas and images, then I’d be delighted to go on more flights of fancy with Hiccup and Toothless.

How To Train Your Dragon 2 opens in wide release on Friday, June 13th.