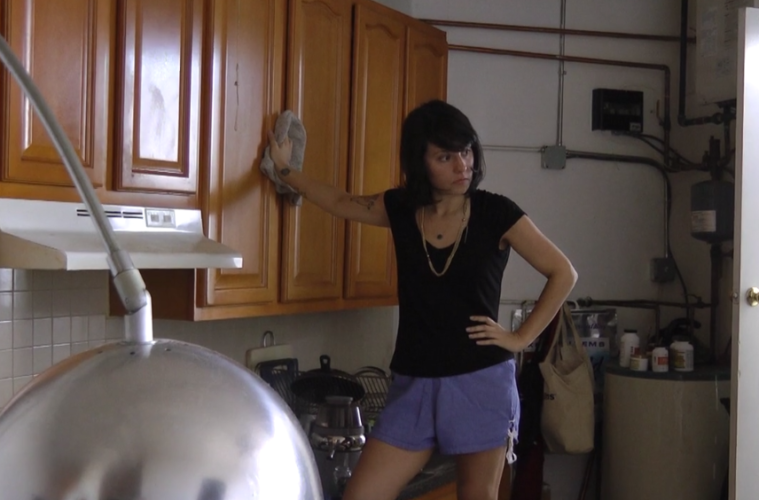 [Review] Here’s to the Future!

In Day for Night, François Truffaut explored the toils and troubles of a film shoot: his fight with actors, justifying his vision to skeptical journalists, and constantly balancing his crumbling personal life. In the end, any extreme pain that comes through off the screen becomes irrelevant, at least when in service of Great Art.

Gina Telaroli‘s Here’s to the Future! in some way poses the opposite: art is nice, but why toil away when production can be fun? The film meanders through the production  a small apartment on a warm September afternoon as a small group of friends attempt to recreate a short scene from the Michael Curtiz Pre-Code melodrama The Cabin in the Cotton starring Bette Davis. And while there is a main camera shooting the action, Telaroli invited each of the crew to film anything else they wanted on iPhones, Go Pros, and other cameras. (In the interest of full disclosure, it should be said that I’m friendly with Telaroli and some of the other crew members.) The film takes the old adage that “everything is cinema” to its fullest extent by also capturing everything beyond the frame. The result truly embodies the idea of every film being a documentary of its production, but what’s more unique here is that this isn’t a toiled, labored experience, but simply more of a hangout. (Telaroli has compared it to Howard Hawks’s Hatari!, another exclamatory marked movie.) Because Telaroli only sees herself as the mediator of the production instead of an auteur, her film never pushes an agenda as much as seemingly wandering around the set, thanks to various cameras. Here’s to the Future! emphasizes this camaraderie as the crew jokes around, discuss their favorite movies (as well as some brief remarks about the short-lived ABC series Pan Am), remark on the rest of their lives, and ask when they should order pizza.

There’s some discussion of “character motivation” and the actual process of a scene being produced, but there is no dogmatic search for perfection. Instead there is experimentation: three different males and three different females each take a crack at it, with slightly different results and interpretations, each trying to see what can come out of trying new gestures or pauses or even sprinkling a little extra cheese on the pasta. If the scene is still “sacred” in some way, Telaroli never emphasizes cinema’s production as a hollowed sacred ground, but as part of a quotidian, modern-day life. The film climaxes with Telaroli and two crewmembers viewing the footage, unaware of the Macbook actually recording their reactions to the various takes as they laugh away at shots gone awry (and Telaroli has a very infectious laugh). It’s a film that finds pleasure in the act of creation itself—what they laugh at is not the perfection of their art, but the imperfections that go into creating it.

Telaroli cares more about what you often don’t see in cinema than what you do, as was evidenced by her prior feature, Traveling Light. When I interviewed her in 2013, she explained that directors from the Pre-Code era like Curtiz and William Wellman rarely talked about their themes, instead focusing on the stories that came out of their productions and the friends they made on set. Here’s to the Future! emphasizes this in a way that is at once rigorous as well as relaxed. A shot of curtains flowing in the air can feel genuinely avant-garde, while two of the actresses looking at their reflection via a camera pointing at a metal saucepan has a delightfully amateurish quality. Telaroli never creates this hierarchy, however — it’s all part of the fun game of making movies. Cinema may seem like a hollowed ground when we step into the theater, but it can also be a space for friends to simply do what they love together.

Here’s to the Future! premieres at BAM’s “Migrating Forms” on Saturday, December 13. You can buy tickets here.