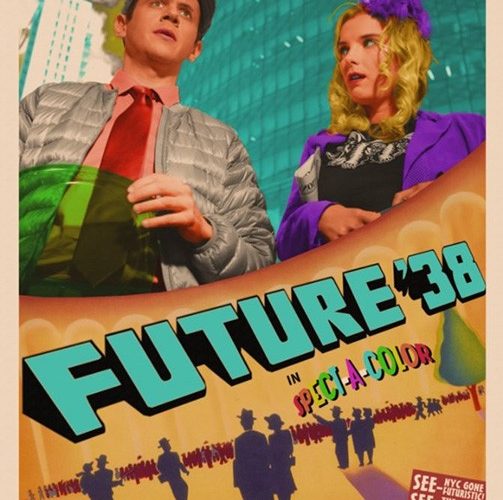 If you ask how scientists are smart enough to invent time travel yet can’t find a way to defeat Hitler without needing time travel to augment their weapon’s power, Jamie Greenberg has succeeded. He’s succeeded if you don’t ask that question too because you’ll have given yourself fully to his unapologetically punny, “lost” film known as Future ’38. So Greenberg can’t lose. His film entertains with overt playfulness and reveals the pedants in the audience unable to simply laugh and have a good time without nit-picking every single detail despite it being a screwball science fiction comedy that intentionally takes liberties with both history and reality. If uber “film twitter” troll Neil deGrasse Tyson can be coaxed into coming aboard to poke fun at himself, you should too. The premise is simple: America circa 1938—three years before Pearl Harbor brings us into World War II—has discovered something with the potential to put fear into the hearts of its enemies if it’s able to work correctly. This “Formica Atom” possesses energy with the might to melt an ice cube today and level a city eighty years from now after undergoing enough half-lives to do so. Nothing can therefore be done at present with Hitler advancing throughout Europe unless the government sends someone to 2018 via time travel to retrieve the device and bring it back fully charged. Considering the risks, only someone devoid of attachments like the under-achieving, wealth-motivated Essex (Nick Westrate) proves an ideal candidate. His bravery can be bought for ten thousand dollars.

His subsequent mission is where the notion that Future ’38 is a “lost” film enters. Greenberg has imagined his story as one told from the perspective of artists pre-WWII and therefore presents its version of 2018 through that lens too. It’s not a perfect exercise since he obviously knows what we’ve created, but such knowledge allows him to lean more heavily into the fact his film uses its science fiction conceit to serve its comedy. So rather than think of crazy things to be prescient like the 1980s did with flying cars, Greenberg nicely decides to work backwards. He takes everything we do have (internet, text messages, cell phones, and the 24-hour news cycle) and strips them down to their concepts before re-building them through that 1930s filter. The result is campy with post-production visual artifact filters and a tone manifested in part via actors almost turning to the camera for fourth wall-breaking winks. It’s all part of the film’s abundance of charm as it plays into its absurdity, owning it in a way that ensures its lack of self-seriousness isn’t misconstrued as a lack of respect for the audience. Once you get beyond the discrepancy of time travel existing and the atomic bomb not, Greenberg buckles down to keep plot holes at a minimum when not being used as punch lines. He sprinkles in callbacks to add a layer of nuance as far as construction and characters go without sacrificing the broad strokes of lunacy slathered on above them. Fun and smart aren’t mutually exclusive.

And if high concept time travel and hijinks weren’t enough, he adds an effective amount of romance to more or less steal our interest away from the main thrust. We don’t stop caring about Essex’s mission as much as grow more invested in the love story surrounding it that can sadly never be unless he decides to forsake world peace—a development that’s legitimately on the table. It’s entertaining seeing him as the naïve stranger unversed in his surroundings and more so to watch Banky (Betty Gilpin) hold his hand as tour guide without losing her confident, sharp-edged, and hard-boiled independence. Rather than be a pawn to the story, Banky is a crucial piece that may prove more important than Essex’s heroic adventurer. And their romance builds authentically. The mission’s climax on-the-other-hand moves to farce with vindictively neutered Germans (Tom Riis Farrell’s Lamont), haplessly tough Jewish mafiosos (Hillel Meltzer’s Matzoh), an ancient bellhop (Madison Arnold), and right-place-at-right-time BFFs (Tabitha Holbert’s Lux and Sophie von Haselberg’s Iota). Things get wild with wardrobe pranks, butterfly effect impossibilities, and drunken Shriners as the script pokes fun at chauvinism, technology, and espionage. A lot of what happens can be described as gags, but you’ll be surprised by how many circle back with relevance to the plot. Everything is planned to the penny with each joke resonating on a contextual level beyond the eye-roll it generally earns in response. The actors playing up their anachronistic dialogue is no different as it brings quippy noir slang to the twenty-first century.

Greenberg adheres to his out-of-time genre thesis and his cast revels in performing within that mold. The result won’t be for everyone, but it should be difficult for detractors to not at least praise the attempt. In an era when escapist projects like superhero franchises have grown darker and more mature to mirror the desperate times we live in, it’s good to see filmmakers taking chances on old-fashioned aesthetics to delight with whimsy rather than punish with futility. Future ’38 mocks the severity of potential worldwide destruction, using it as the springboard towards fantasy, frivolity, and love. It pokes fun at dire circumstances, finding humor in cavalier heroes made humble while acknowledging humanity still exists in jaded times. It reveals how peace is in our hands.

Future ’38 is now available digitally and on VOD.