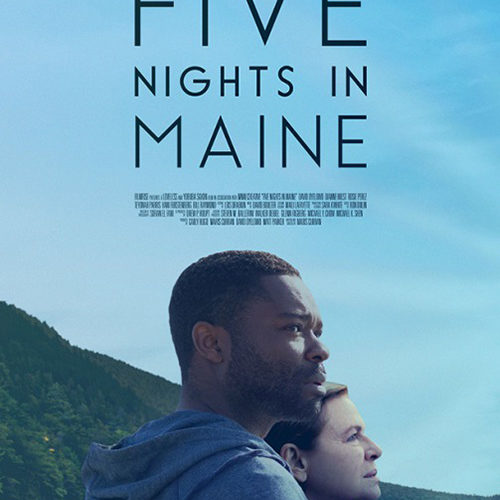 One day, Sherwin (David Oyelowo) receives a call informing him that his wife, Fiona, was killed in a car accident. Devastated, Sherwin travels to Maine to see Fiona’s mother, Lucinda (Dianne Wiest), a stern woman he’s never met and who’s dying of cancer. We learn that Fiona and Lucinda shared a strained relationship, their last visit together having been particularly unpleasant. As the process of mourning plays out for Sherwin, he spends a few days puttering around Lucinda’s cottage with Ann (Rosie Perez), the old woman’s live-in nurse. Emotionally distant and light on plot, Five Nights In Maine is the sparse and ultimately underwhelming story of how all of this goes.

It’s a film with sincerely admirable intentions, a weepy, yet uplifting indie drama that employs a thoughtful and meditative visual approach. There’s nothing wrong with quiet stories about small reactions and even smaller revelations, but here we’re left with too many reactions and too few revelations. Endowed with a contained theatrical feel, the story is mostly confined to a small cottage in the woods, in which three characters sit and talk. While it never feels stagy, the few moments outside in the wilderness of Maine are a welcomed reprieve from the cottage’s drifty silence. Clocking in at a brief 82 minutes, it’s an admittedly glossy story, and an emaciated one that, in the end, borders on insubstantial.

While the screenplay is free of the formulaic melodrama we’ve come to expect from this type of story, the film’s reluctance to sully its hands in schmaltzy Nicolas Sparks-esque digressions leaves us with a threadbare and anticlimactic narrative. Trying desperately to avoid feeling sappy or cornball, Five Nights In Maine invites us into the interior world of its characters before coldly stopping us at the front door.

You don’t have to pander to your audience, but in order to feel empathy for a character, we need to understand their plight with a bit more clarity. Oyelowo and Wiest exchange remarkably few words, entire scenes hinged on body language and sorrowful glances, many of which are effective. Thankfully, the film never becomes boring as the tender sincerity of its lead performances keeps the hook planted firmly in our lips. On paper, all of this reads like a filmmaker valiantly attempting to do something new and different, which is exactly what film critics want. While the poignant performances of Oyelowo and Wiest continually hold our attention, we’re left anticipating a shattering plot-twist or reveal that never comes, rendering Five Nights In Maine an ultimately frustrating experience.

Despite laudable attempts to skirt the formula, we’re still treated to a number of obligatory moments, including a karaoke scene to indicate that Sherwin and Fiona were indeed deeply in love. We even get a lightly playful country-mouse-city-mouse diversion in which Sherwin is forced to gut a recently caught fish. This scene merely exists to allow the toque-wearing Rosie Perez, who doesn’t sound like anything but a New Yorker, to exclaim, “Not bad for a city boy!” The only time we get a glimpse of what Sherwin is thinking is via a series of choppy, lushly lit flashbacks that offer no expository information other than “I miss my wife.” Sofian El Fani‘s painterly cinematography is a strong visual highlight, which comes as no surprise following his work on Abdellatif Kechiche‘s Blue is the Warmest Color and Abderrahmane Sissako’s Timbuktu.

In an interview with Filmmaker Magazine, writer-director Maris Curran stated that the film deals with themes of mortality, guilt, and ultimately “race – but not in a Hollywood, Capital R way.” In that fashion, her screenplay withholds on expectations of where this kind of story might lead, leaving the race issue locked between the lines. Is the hostility between Fiona and Lucinda related to Sherwin’s being black? The film does not explicitly say. Perhaps these feelings are left unconfirmed in an attempt to subvert expectations, leading us to believe a character will go left when they’re about to take a right. Instead of staying one step ahead of the audience, the resulting subversion simply causes all tension to evaporate.

A pensively maudlin Hallmark commercial, if such a thing exists, Five Nights In Maine aspires to the levels of high-minded, heart-wrenching tearjerkery, and falls short.