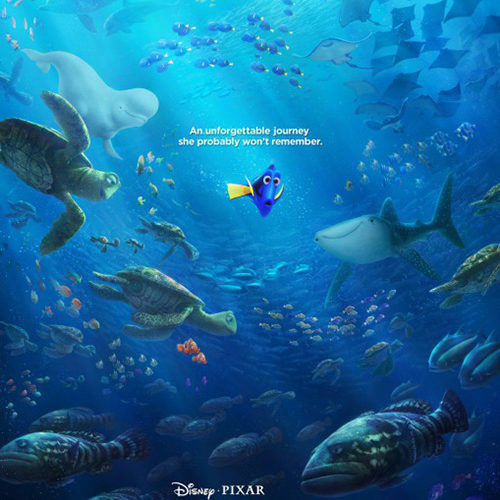 The ocean is a big, diverse setting for a movie, consisting as it does of environments both brutal and beautiful. In Finding Nemo, one of its most celebrated films, Pixar leveraged both this natural grandeur and its own technical prowess to fill an unadorned narrative with moments of nearly overpowering presence. It was the story of a father looking for his lost son, festooned with all of the small moral lessons about growing up and letting go and the power of love. It was simple, but the world it brought to life made the film special.

In a quest to invert everything about its progenitor — perhaps as a way to inoculate itself against accusations of pointlessness — Finding Dory doesn’t just trade a searching parent for a searching child, but also swaps the big blue sea for a Marine Life Institute. Given the technological leaps and bounds that the company has made in the intervening years and what impact the few open water scenes still deliver, it’s a bizarre choice, one of many that keep this film from being great and forcing it instead to settle for merely fine.

The major hindrance that Finding Dory must overcome is its choice of a protagonist. In Nemo, Dory (Ellen DeGeneres), an adorable blue tang that struggled with short-term memory loss, was a comedic sidekick. Her addle-minded lack of focus and boundless optimism served as both a barricade and boon in Marlin’s (Albert Brooks) search for his son. It was a character trait that created conflict but also lead to many triumphant moments of victory for the character and that story. Here, it becomes a major plot point — the driving mechanism of the entire story — and the focus of many, many conversations about respecting and finding value in disability.

A year after the events of Finding Nemo, Dory is living with Nemo (Hayden Rolence) and Marlin (Brooks again) under a piece of brain coral next to their anemone. Following a close call involving a dangerous undertow that jogs her memory of her family, Dory decides she must set off in order to find the mother and father she can’t remember forgetting. One would think this is a chance to visit some deep-water environments left out of the last picture, but the narrative goes in a very different direction.

Dory, Marlin, and Nemo cross the entirety of the Pacific Ocean in a single, cameo-filled scene and arrive on the coast of California when Dory is suddenly snatched up by a pair of marine biologists who believe she is in distress. From there she is taken into the Marine Life Institute, a research and rescue center for sea creatures that also functions as a theme park. Believing the park holds her parents, Dory teams up with a traumatized octopus in order to search the many exhibits. Meanwhile, Marlin and Nemo attempt breaking into the quarantine zone to find their friend.

This setup creates a dual narrative that embraces the best parts of espionage and heist films. However, both of those genre types value briskness of narrative and intricacy of action, so the usual Pixar touch of character and heart has to be crammed in at the margins. Dory has a series of flashbacks that fill in her backstory and layer on emotional notes to an otherwise frenetic narrative melody, but, in general, relationships from the story’s start are unchanged by film’s end. The narrative-mandated internal conflict revolves around Marlin insulting Dory’s memory (her ability to remember, not the memory of her) but they are separated so soon after the initial slight that the tension never takes off. When it comes time for Dory to be told that her memory problem makes her unique and special and valuable, it feels less like an earned moment and more like an obligation to be filled. It’s especially disingenuous given how certain other characters who are less anthropomorphic are treated, with the entirety of their screentime serving as a series of cheap punchlines.

The good news is that the newest additions to the cast, one-dimensional as they are, make up for most (if not all) of these plot and story deficiencies. Idris Elba and Dominic West stage a small Wire reunion as two seals who know all there is to know about the MLI, but who also excitedly protect their lounging rock. Ty Burrell and Kaitlin Olson lend their voices to a bantering beluga whale and near-sighted whale shark, respectively, making for an important duo in assisting our forgetful lead while grappling with their own self-confidence issues.

The star, though, is Hank, a sneakily capable but guarded octopus who wants to use Dory’s plight to get himself out of having to be returned to the ocean. As voiced by Ed O’Neill, Hank is a fantastic dramatic and comedic presence, the kind of damaged, grizzled hero that plays as a perfect foil to Dory’s impish eagerness. They’re a great team, and their dynamic is much more interesting to observe than a simple retread of the Marlin-Dory dynamic we saw in Nemo.

Everything is gorgeously rendered, of course, and directors Andrew Stanton and Angus MacLane stage some thrilling and inventive action scenes. There’s a plethora of visual jokes on top of the creative solutions fish use to navigate dry land. From a technical perspective, this animation is everything one could hope for from the studio that gave us a number of classic animations in this new millennium.

It’s a shame that the emotional and narrative aspects can’t keep pace with these leaps in technology. In terms of emotional complexity and character evolution, Finding Dory treads the same water as its predecessor with less success. It’s a fine technological update and not a particularly inspired storytelling upgrade.

(Note: Alan Barillaro‘s short film, Piper, plays before Finding Dory. This may be the most accomplished short Pixar has ever produced. It tells, with elegant economy and wordless grace, the story of a hatchling sand piper learning to navigate the shore to find food. Photo-realistic and filmed with a shallow focus that makes the sand piper’s relatively tiny world seem overwhelming, this short is everything a Pixar fan could want. It sets a new benchmark for visual storytelling in a computer-generated environment while also delivering laughs and heart. Honestly, if you’re so-so on the idea of Dory, Piper is more than enough to tip that ambivalence into a firm “yes.”)