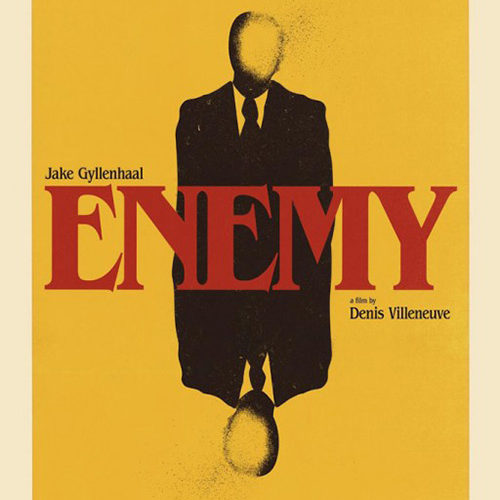 When one reads a synopsis for the late Nobel Prize-winning author José Saramago’s The Double you’ll find a very straightforward tale of doppelgangers. There’s the alpha, the pushover, and the innocent victims caught between; the insanity of seeing an exact replica in the flesh paired with the infinite possibilities such a discovery could mean. One is married; one has a girlfriend. The latter injects himself into the former’s world through curiosity, the first into the second’s purely for unfounded revenge and sexual desire. They exist together without looking deeper into what they are, pushing forward along a path of self-destruction you can see coming a mile away, and yet still find yourself captivated through the actions of those left from the wreckage. Denis Villeneuve’s Enemy (adapted by Javier Gullón) looks to amplify it further. Everything written above remains intact with a stunning level of accuracy, but the filmmakers have added more intrigue, surrealistic existentialism, and intellectual subterfuge to keep your mind reeling hours or days afterward. Even as it ended I still found myself unsure which segment of the “double” trope was put onscreen. Was it a Fight Club-esque document of schizophrenia or a physical anomaly explained, unexplained, both, or neither? We have no idea who is who upon entering the film when one Jake Gyllenhaal listens to a voicemail from his mother (Isabella Rossellini) and the other attends a voyeuristic fantasia of naked women and tarantulas on platters. Which is the history teacher Adam Bell and which the struggling actor Anthony Claire? Or were they the same the whole time?

Both have a beautiful blonde in their arms every night, whether it is Adam’s girlfriend Mary (Mélanie Laurent) or Anthony’s wife Helen (Sarah Gadon). We wonder to ourselves if their mother is somehow the same person, ignorant to the fact both visit her from time to time in order to meld their occupations and personalities into one. Anthony hasn’t been to his talent agency in a while and we discover Adam caught in a loop at school teaching the same thing over and over again with the telling words of Marx declaring how there’s two of everything: one tragic, the second farce. Which man is the copy, though? Is it fame moving towards caricature as personal life evaporates into public recognition? Or is it mounting malaise and frustration while yearning to break free for more? The way these stories usually go is to a place where one is shown to be scared and the other cognizant. It’s the path taken by TIFF 2013’s other doppelganger film entitled The Double. One tries to takeover the other’s life while the victim is left helpless to stop the transition. But here things are different. Neither man has a clue about what’s going on. Yes, one finds it invigorating while the other simply wants to runaway, but there is still trepidation and fear on behalf of each. Add in allusions to infidelity, the intriguingly unclear dynamic of Adam and Mary’s relationship, and Helen’s pregnancy and the sky is the limit on what may be behind everything. Dramatic faces and tearful insecurities increase while dreams juxtapose against reality in a subtle yet outlandish way.

We begin to recall the tarantula at the start and dissect it’s meaning. We think about molting anew; the Greek myth about Arachne—a woman accusing the Gods of obvious infidelity—turned into an eight-legged creature by Athena; and African and Native American folklore depicting them as tricksters. It’s a motif that to my mind is a wholly new addition to the story by screenwriter Gullón, a Kafka-esque nod to Gregor Samsa’s cockroach visage trapped as a self-conscious burden to those in his life. Why then do the nightmares manifest arachnid traits on women? Why does a woman at the start get depicted as its destroyer—a patient black widow waiting to pounce on her prey after gradually building trust? It’s a puzzle only fully deciphered through the personal prism of your imagination and the final frame. More questions arrive like why Adam’s co-worker suggests he watch a film Anthony was in. Did his subconscious recognize his face, pushing it to the recesses of his mind since the man before him would never have the confidence to act? Adam becomes his own worst enemy as curiosity reigns before he can even fathom the consequences of his actions. Just because Anthony looks and sounds like him doesn’t mean they share the same psychological make-up. Yes, Adam may be the unhinged one on a search, but he appears harmless in comparison to Anthony’s cavalier pride. Can they co-exist? They have for this long in Toronto no less—but now that they know, can things ever be the same? And would anyone, including the innocent women caught in the middle, want to return to before?

You could spend hours debating, ripping apart every composition to find its essence. But don’t let it distract from the gripping thriller Villeneuve has crafted. Gyllenhaal embodies both men with care, building distinct characters that no amount of physical similarity can prevent discerning who is who. We see the tumult behind both sets of eyes, weighing their options and inching towards a reckoning as Villeneuve shrouds everything in a hazy pigment of dark fantasy and horror. The universe works in mysterious ways and the lives of those we assume are normal often prove anything but. Does that make the final image less disturbing, impossible, or mesmerizing? Our lives are a construct of perspective where things are hidden by, from, and for us. It’s all a trick, constantly played like some grand joke for which we’re the punch line.