Embattled Review: A Father/Son MMA Match Takes Place In and Outside of Ring 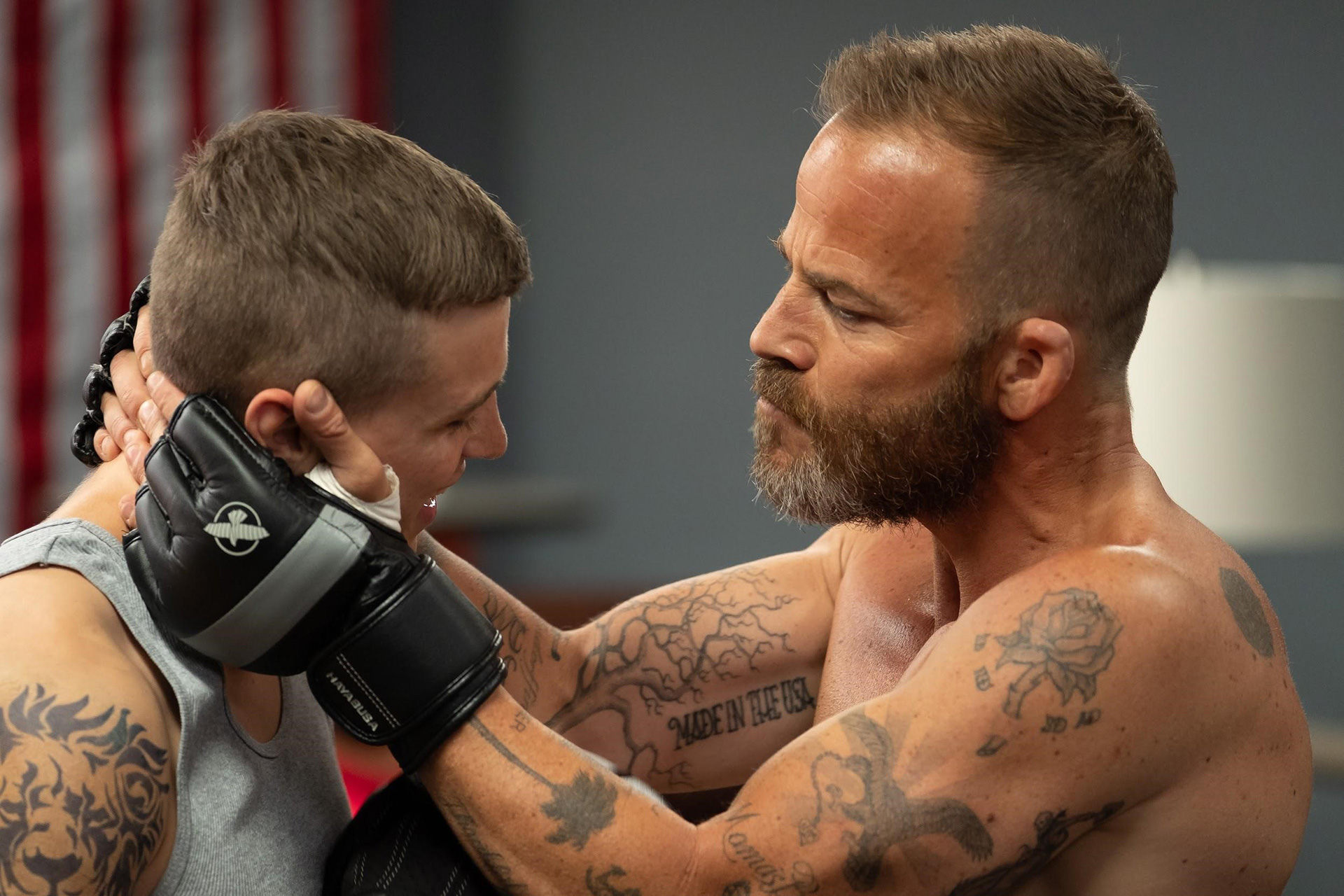 You’re either a sucker for films like director Nick Sarkisov and screenwriter David McKenna’s Embattled or you’re not. I’m the former—a fact that’s proven especially true when the filmmakers are willing to use the fighting drama genre as a means to provide something more than just an adversarial winner-takes-all approach. So I was hooked pretty much from the first scene as Cash Boykin (Stephen Dorff) runs his mouth on the way to the Octagon, pumping himself up with the crowd as his son Jett (Darren Mann) gives a few verbal jabs to keep him loose and also stoke the killer edge that’s vaulted him to two championship belts in MMA. It wasn’t that camaraderie, but what came next that earned my investment.

Namely, it was the look in Jett’s eyes as the elation and pride conjured by his father’s objective talent washes away to be replaced by disillusionment. It happens towards the end of the match when Cash has his opponent dead to rights on the ground and proceeds to just pummel his face over and over again with a crazed look of bloodlust. Sarkisov cuts to black quickly as one more punch lands, bringing us into the chauffeured car taking Jett home. Cash is wasted and still high off the adrenaline. His wife Jade (Karrueche Tran) is trying to sleep while also keeping him in check for the chauvinistic and machismo nonsense he’s spewing. And Jett is smiling again, basking in the limelight. He’s embracing this second chance at a relationship.

That’s when everything becomes clearer. This father/son bonding time is new. Cash is “on” because he’s entertaining a boy he’s done very little for over the past eighteen years. The fact that he just made a million dollars per minute during that fight is meaningless in the grand scheme of things because none of it will matter in Jett’s home. His mother Susan (Elizabeth Reaser) will still pick-up shifts waitressing to supplement her day job and pay the bills raising a special needs child creates. Quinn (Colin McKenna) is also Cash’s son, but he gets even less from the man than Jett because at least his older brother has the opportunity to follow in Dad’s footsteps. Jett has value. And since money is Cash’s true God, that matters.

Jett is therefore caught between worlds with his parents. The advertising has foregrounded the film’s climactic battle between father and son in the octagon but it’s secondary to the introspective drama. That’s where the fireworks are, but it’s not where the narrative purpose lies. The true worth to Embattled is the path Jett takes to get to the octagon and his motivations. It’s about knowing that MMA is his future without forgetting the value of graduating—or pursuing help to do so—because he’s seen what the alternative offers. That’s not to say Cash is an idiot. His threat to unionize proves he’s not while still reinforcing his me-first attitude steeped in violent rage.

The juxtapositions are obvious, but no less crucial or effective to progressing toward a seminal moment in Jett’s life. First, there’s Cash drinking and driving without recourse before screaming at his wife about how he’ll never monetarily help Susan and the boys. Then there’s Jett burning the candle on both ends by juggling schoolwork, gym time, and the responsibilities that go into being a father figure to his brother — necessary because of Cash’s absence. We’re witnessing a potential future for Jet that would be all but assured if his father raised him. Add a dark repressed memory slowly coming into focus and their inevitable bout becomes about much more than bragging rights.

So don’t expect to find yourself on track to the usual happy ending—or usual sad one for that matter. Many of the stops will seem familiar, but the ways in which they’re experienced are authentic and perhaps even surprising. And while the script may use Quinn, who has Mowat-Wilson syndrome, and his teacher Mr. Stewart’s (Donald Faison), a Silver Star-winning paraplegic, as easy avenues to say something profound or set Cash up for comeuppance; it also treats those things with enough nuanced complexity to not disregard the mental strength overcoming them provides. Reductive or not, contrasting how Jett and Cash treat these two characters reveals a lot about who they are.

The fight is thus secondary to everything, and yet it remains tense and punishing in the best way possible where these types of things go because we truly don’t know who will come out on top. If Cash wins (Dorff is so good at hiding his emotions under a mask of abuse that I almost wanted to give him my sympathy… almost), he’s beaten his own kid for a purse. If Jett wins (Mann really steals the show as he wrestles with who he is and who he could be), he’s still going to finish school and hold onto whatever normalcy he can.

Cash stands to forfeit his celebrity appeal. Jett may forfeit his professional life. Those are real world stakes threatening their very identity. The circumstances aren’t without flaws (turning this match into a decade-in-the-making event because of what happened to split Jett’s parents up isn’t a great look at its manipulation), but the characterizations more than counterbalance their narrative convenience. Because we believe who Jett and Cash are—the love they share as well as the hate—we can see this conflict on purely economic terms (America lives for wild storylines and pitting father against son on pay-per-view is definitely that). In the end. one sees winning as the point while the other person prioritizes their family. Maybe Jett is naïve, but he’ll still make it if he loses.

Embattled opens in limited theaters and VOD on November 20.