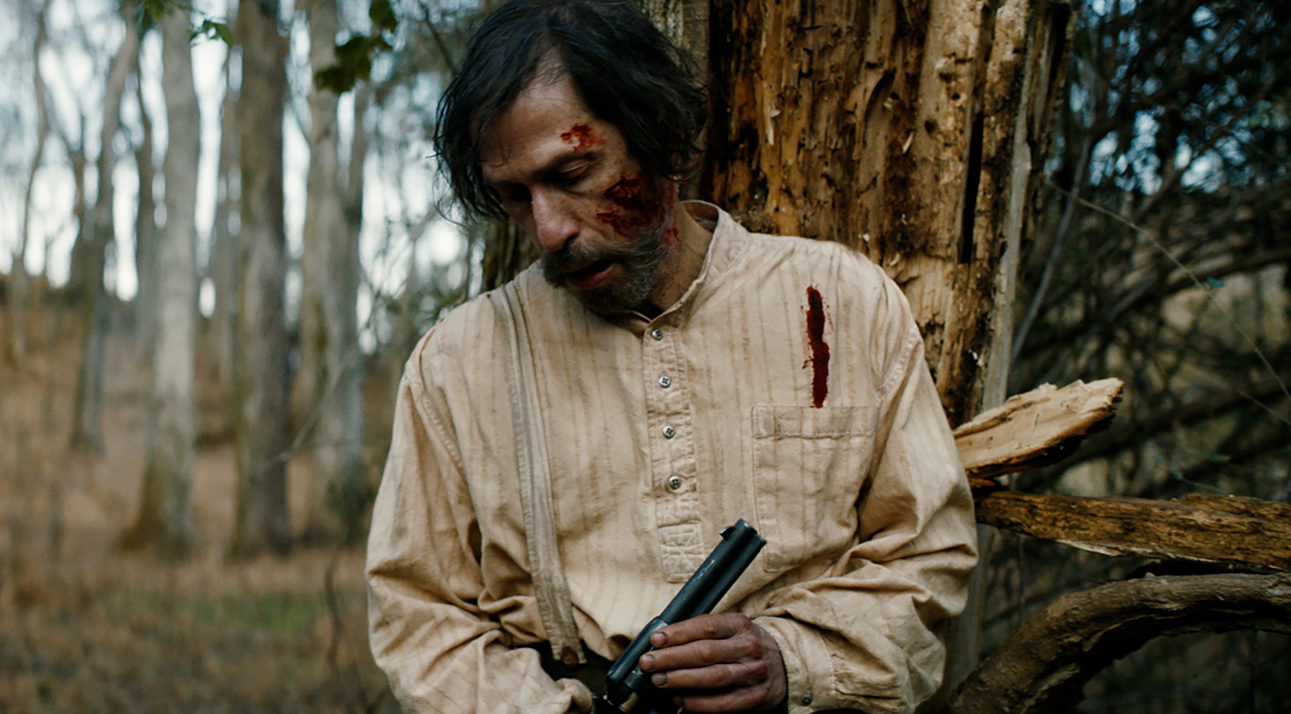 Henry’s (Tim Blake Nelson) been living and farming his Oklahoma land for almost two decades, if not more—the last ten as a single father to the now-teenage Wyatt (Gavin Lewis). Despite having help from his brother-in-law down the way (Trace Adkins’ Al), this life isn’t an easy one and the kid is desperate to escape it as much because of the work as the stone wall his dad has become. Wyatt feels he’s still being treated like a child when he knows he deserves more; Henry won’t let him hold a gun, let alone learn to shoot one. Tensions rise, Henry’s refusal to bend grows, and you can sense Wyatt is readying to leave the first chance he gets. Then everything changes.

It starts with a horse: saddled but unmanned and covered in blood. Henry decides to head out and find the obviously injured rider, demanding Wyatt remain. The kid implores him to let him go too in case there’s trouble, but that’s exactly why he won’t allow it. The cold, unwavering stare Henry gives shows us the first glimpse of a hidden past he won’t reveal easily. It’s the look of a man who knows he can handle whatever he might find as long as he doesn’t have someone else to worry about when he does. Is he over-protective? Probably. Is he engaged in a self-fulfilling prophecy wherein his son can never help him because he refuses to teach him how? Certainly. Eventually, however, he won’t have a choice.

That time is now as Old Henry writer-director Potsy Ponciroli puts more than just a half-dead man (Scott Haze’s Curry) at the end of this search. Henry finds a pistol a few feet away from the body, then a satchel full of cash a few feet more. His instinct is to simply mount his horse and go back home knowing that no good can come from mending this stranger’s wound. Either Curry’s an outlaw who will kill him and his son to reclaim that money or the people who shot him will arrive shortly to do the same anyway. Can Henry live with leaving him to his fate, though? Can he return home and look Wyatt in the eye while lying about finding nothing? Of course not.

Enter Sheriff Ketchum (Stephen Dorff) and his deputies Dugan (Richard Speight Jr.) and Stilwell (Max Arciniega). The first talks enough for the trio and feels no remorse about inflicting pain to receive the responses he desires. They stumble upon Henry’s farm, saying Curry is a bank robber pretending to be a lawman. Curry tells him Ketchum and the boys are the same. While none can be believed, Henry will have an easier time dealing with one than he would four—so he does what he can to mitigate the risk posed to Wyatt, knowing full well that he’s only prolonging the inevitable. Maybe he’ll buy enough time to escape the crossfire or maybe it’s already too late. His past might have finally caught up to him.

This film is about the relationship between Henry and Wyatt at its core. It’s about the ways in which we overcompensate for our own mistakes when it comes to trying to prevent our children from following the same path. We know from the beginning that Henry is no saint. He doesn’t pretend that he is. Without going into detail with his son about the why, however, lessons can never be learned. There will only be resentment instead. And maybe Henry could live with that. If he shelters Wyatt long enough so to not have the opportunity to pursue crime, maybe the realization that he’ll leave and never come back is a price he’s willing to pay. That truth ignores the anger and rebelliousness pushing him to darkness regardless.

Curry’s predicament could therefore prove a blessing in disguise. If Henry is forced to realize he’ll need Wyatt’s assistance to survive, the defenses might lower enough to let him in. And if things get wild, Henry might also find himself dismantling the façade he’s built over years to let loose and show the monster he’s fought so hard to contain. The standoff is thus not between him and any of these men darkening his door. It’s about today’s Henry versus yesterday’s Henry. When he tells Ketchum to leave so he won’t get hurt, it’s a plea more than an ultimatum. Because everything he’s built will crumble otherwise. That rage Wyatt harbors might just turn into fear too. Watching him leave will only hurt more as a result.

There remains another possibility, though. What happens on this farm—and it will be a brutal, bloody, and unapologetic climax—could potentially see Wyatt feeling pride instead. Perhaps this is the moment Henry becomes his hero after playing the domineering villain for so long. Everything he did suddenly makes sense as a truth he never would have dreamt is revealed to provide invaluable context towards just how much Henry sacrificed to keep him safe. Credit Ponciroli for the ability to write this script in a way that renders this bombshell unnecessary to film’s heart while also ensuring it can deliver an action-packed finale at once perfectly attuned to what came before thematically and tonally unique from it. And Tim Blake Nelson owns every single second, start to finish.

The acting is top-notch throughout, matching the film’s quiet yet dark nature. This western is dialogue-heavy with sharp bursts of violence before the big fight, thriving on the internal tumult of its characters. It thus excels when each man is speaking calmly despite tensed muscles at the ready to draw and fire if necessary. Haze is menacing enough as an injured rat in a cage to fear and sympathetic enough to believe he’s deserving of protection. Dorff is a delight, whittling his piece of wood while telling long-winded stories meant to keep his audience at ease until his ruthlessness takes over to inflict pain. And Nelson swims through both with skepticism, desperate to be left alone yet prepared to scorch the earth. Test him if you dare.