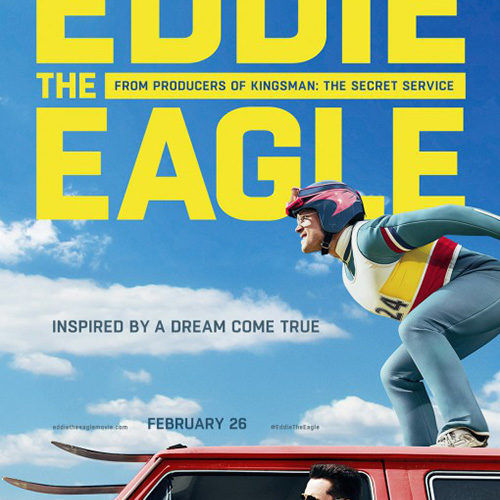 The 1988 Winter Olympics in Calgary attracted more absurd hopefuls than coffee shops in Los Angeles. The collection of oddballs meant that the Jamaican bobsledders of Cool Runnings weren’t the least plausible competitors to be led by a disgraced American pro that year: there was also a stubborn, tubby amateur skier named Eddie Edwards.

Eddie the Eagle’s charming true story, facts futzed to create a more Disneyfied tale (no living in a mental institution due to poverty, etc) and dismissed by Edwards himself as about 10% accurate, tracks the unlikely Edwards (a wonderfully engaging Taron Egerton) from amateur to England’s record-holding Olympian.

Like Napoleon Dynamite on skis, Edwards’ awkwardness lost an Olympic bid in his chosen event (downhill speed skiing), while the the snobbish British selection committee’s classism stamped out any dreams of re-qualification. A thoroughly British sports movie, the strata between the posh and lower class takes the place of the typical racial tension found in their American equivalents. Nobody wanted to sponsor a sloppy, unmannered weirdo to the represent their country. Thus begins an underdog tale you could probably finish by heart. Through loopholes in bylaws and a complete void of competitors, Edwards’ switch to ski jumping would all but guarantee a dream trip to the Olympics. The only problems are that he has never jumped before, has no coach, and is broke as a bad joke. But through perseverance, he makes good on his goals and proves that winning isn’t everything.

So yes, the plot sounds beat for beat – almost minute by minute – like Cool Runnings. Crazy underdogs: check. Drunken, overly-American Hugh Jackman (Levi’s, cigarettes, and an American flag-print flask: triple-check) as reluctant coach living in shame: check. But the film’s light, jolly acknowledgment of its own stubborn sunniness reflects the never-say-die attitude of its charming subject. Even if it’s not trying to be the best movie, it’s having a blast being here.

Egerton, most recently known as the sly break-out star of Kingsman: The Secret Service, embraces his character’s ridiculousness in ways so physically unbecoming it’s hard to imagine an American star doing the same. With his bug-eyed glasses, extra pounds, and prognathistic emulation of the British Habsburg Jaw, Egerton is almost unrecognizable as the unselfconscious skier. His eccentricity accentuates his determination to a point unoccupied by the typical movie athlete. He’s too much of a dork to be in that echelon. We love Rocky’s grit and endurance, thinking he might have a chance at the big time. We love Eddie’s perseverance to fail a little less.

Supplemented by a synth-riffing ‘80s score and an elevated performance by Jackman, the film’s standard montages and plot cliches (the coach refuses to coach, eventually acquiesces; the climatic cut back to the coach where he says “Yes!” when trying to nail that perfect tone of pride and excitement) are more than tolerable. Wonderfully bizarre training sequences let Jackman chew the scenery, imploring Edwards to make love to a jump as he would to Bo Derek. Those jumps feel as high, fast, and dangerous as necessary, often evoking the blurred backgrounds and cartoonish focus on round-helmeted heads of Speed Racer, though I often wished they’d cut them up less. We rush down the seventy meter length of the ramp, first-person along with Eddie, until the moment of launch, but the immediate cut away to an angle almost opposite of where we were arrests our momentum like switching from a GoPro strapped to a bird to a birdwatcher’s binoculars. Aside from these shots and a few clever press conferences, the film is pretty plain to look at – likely restricted by their smaller budget. Similarly disappointing, the dialogue, no matter how likable the leads are, continuously bumbles into the territory of children’s books and bad soap operas. With Dexter Fletcher‘s direction this solidly invested in goofy levity, the time spent over-tightening film’s plotted nuts and bolts dampen the experience. Characters constantly walk in to explain what just occurred, be it a crash or a piece of bureaucratic malevolence levied at Edwards.

Nevertheless, this is the quintessentially British equivalent of a feel-good sports movie. Edwards making his working-class proud resonates as only stoically British parenthood can. Self-deprecating to great success (one of the best gags involving an Englishman’s response to being asked to love Bo Derek), the violent majesty of the sport itself takes a backseat as the plasterer’s plucky son sticks it as cheerfully as possible to the haughtily blazered Olympic elite. And that’s what this film is. It’s not majestic – the guy has a rule named after him to prevent people like him from getting back into the Olympics. It’s the quaint stiff upper-lip in the face of majestic failure. There’s something intrinsically admirable about a judiciously self-aware person, just like there is about a self-aware film, especially one whose constant cuts to a Christopher Walken-emblazoned coaching memoir consistently crack up a crowd. Eddie isn’t groundbreaking by any means, but effortlessly fun, packed with irony, and ready to woo even the most unathletic children through countless TV reruns.

Eddie the Eagle opens in wide release on Friday, February 26.