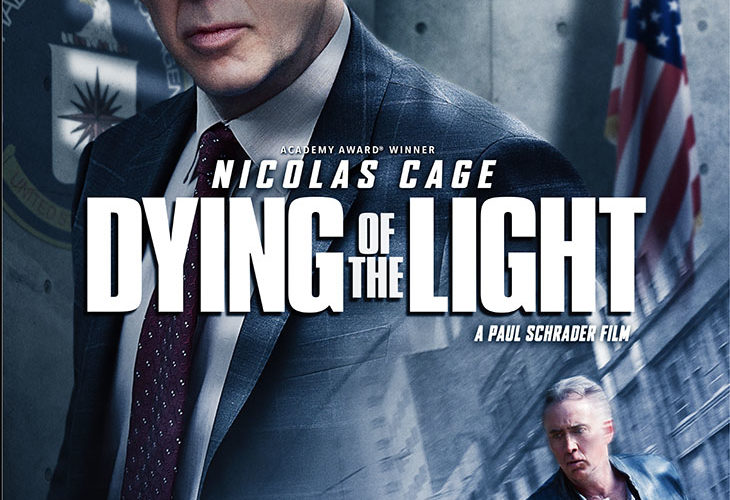 [Review] Dying of the Light

Getting a great turn from Nicolas Cage — a disturbingly physical performer who can go from 0 to 10 in the blink of an eye — requires the considerate crafting of an emotional logic. Cage has worked with many great directors (Scorsese, the Coens, David Lynch) and many not-so-greats, which has led to an extremely varied judgement of his career. Though he has certainly been meme’d for big, showy moments in films (especially those of ill-regard), the fact is that it takes a certain process and energy in any individual scene for Cage to arrive at that point. There’s a rhythmic method to Cage’s madness, and that ability to show how and why he reaches such forceful and manic moments can be the difference between believing in and scoffing at them.

This is to say there’s likely a truly great Cage performance in Dying of the Light, a CIA thriller written and directed by Paul Schrader, but it’s not one shown on screen. It’s a film full of Cage at his wide-eyed, extreme intensity, but many of the scenes seem to lose the process that made them. And, as previously reported, this is likely not the fault of the actor-helmer duo, but a studio-tampered edit that has essentially compromised all that made the film interesting in the first place, as well as led to a boycott by its main parties. This makes Dying of the Light an especially frustrating experience — it’s a film that clearly shows the edges of something like a deeply subversive genre thriller, but you can feel the excision of what was once interesting, leaving simply the outline. And for what reason? Dying of the Light’s basic concept is certainly fascinating, following Cage as Evan Lake, an aging CIA agent who was intensely tortured 22 years ago and is now relegated to a desk job. But he’s never lost his obsession with the man who tortured him, Muhhammad Banir (Alexander Karim), who the rest of his colleagues believe was murdered in the raid that led to Lake’s rescue — leading to obvious political ties between the hunt for Banir and bin Laden. Beyond two legacies going at each other, there’s an existential side to the hunt: both men are literally dying. Lake has discovered a rare type of frontal-lobe dementia, while Banir is in desperate need of a rare cancer drug to continue out of his bed ridden life. This creates a blip on Lake’s radar, sending the agent and his supervisor (Anton Yelchin) on a rogue mission to kill a man who, for any useful purpose, is already dead.

But there is little space for such contemplation (or even the type of genre thrills that original director Nicolas Winding Refn, who’s served as an executive producer and fellow boycotter, may have imagined), as the film now focuses almost solely on the more-or-less-standard investigation plot through Bucharest and Mombasa. And while Lake’s dementia takes on a prominent role, it serves little more use in this version than as a plot device (“Can he stay aware enough to complete the mission?”). Even more frustrating Kieślowski collaborator Irène Jacob‘s small role as a Bucharest cop and former lover of Lake’s. It’s essentially chopped to three scenes, yet during a quiet moment with Yelchin, she hints at what often feels like 30 minutes of missing screen time. Most frustrating is Cage himself, who gets plenty of screaming, but without the tension, process, or method leading up to them. His big moments (“Salam alaikum, asshole!”) come off as funny instead of profound, for each scene feels like rushing through the plot to the punchlines. While Schrader’s camera work gives hints toward something more methodic — wavering and hallucinatory tracking shots around his characters, an intensely expressionistic visual palette courtesy of DP Gabriel Kosuth, and certainly an interesting play with reality and hallucination in the editing during Light‘s climatic showdown (though with another hint toward a fascinating subplot that has been otherwise dropped) — it does little to pamper the awkward, extremely rushed flow. (The film’s action beats feel especially sloppy, like watching a poor Bourne rip-off.)

So what can we do with Dying of the Light? It’s a curious project for Schrader to make after his middle finger to Hollywood movies in The Canyons, and it of course reflects the same frustrating process he went through in 2004, having been fired from the prequel to The Exorcist. His version of that finally emerged, and, with a project that feels so half-finished, one hopes Light can have the same future. While this Lionsgate-approved cut might be “safer,” it doesn’t even work as boilerplate genre fun.

Dying of the Light arrives in theaters and on VOD on Friday, December 5.