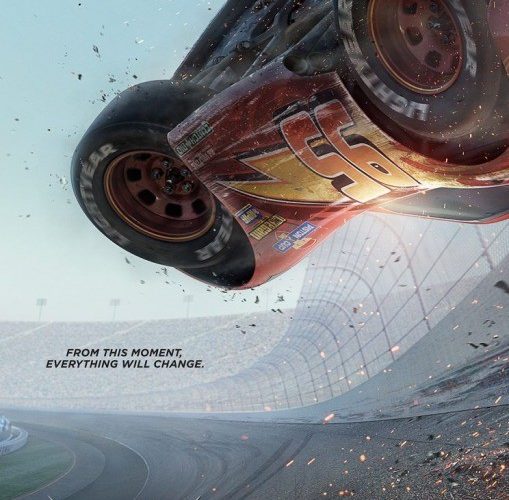 I know I’m in the critical minority when admitting my enjoyment of the Cars franchise, but I honestly do. It’s not even that I am a “car guy” either—I’ve never seen the appeal of them beyond their utility as a transportation vehicle. So my enjoyment of the first film was solely on the level of its message and humor. It dealt with the theme of ego and humility as Lightning McQueen (Owen Wilson) discovered you simply cannot get through life on an island alone. Cars 2 may not have put message in the foreground (Larry the Cable Guy‘s Mater taking center stage to teach kids about individuality, self-esteem, and courage), but it tried something different by projecting a pure entertainment genre (spy thriller) atop its existing world.

While the second didn’t possess the same lasting power as a result, it had merit if only because it was fun. So I was intrigued when the marketing material for Brian Fee‘s (the series’ storyboard artist) Cars 3 arrived with a darkened cloud of drama. The posters showed McQueen in mid-crash, the tone akin to horror movie tragedy telling children their favorite red sports car may die. It was bold, jarring, and perhaps a direction with the potential to hurt its mass appeal, yet it drew me in as an adult searching for that type of weight in family fare usually quick to sanitize with happily ever after. Catastrophic wrecks weren’t new since one ended McQueen’s idol Doc Hudson’s (Paul Newman) career, but what would this one bring?

The answer from screenwriters Kiel Murray, Bob Peterson, and Mike Rich (alongside four other story credits including Fee) is a fitting capper that brings us full circle. McQueen was a rookie shooting past old-timers when we met him a decade ago and time has finally caught up. Contenders with computerized infrastructure, carbon shells, and enhanced aerodynamics like Jackson Storm (Armie Hammer) have begun entering the Piston Cup circuit in order to usher in a brand new era. One by one the veterans voluntarily retire or are forced to by their owners, a massive shift in focus and talent arriving overnight. Lightning sees his career threatened by outside forces just like Doc and pushes too hard to overcompensate. The inevitable massive wreck instantly places his racing future in doubt.

It’s the perfect set-up to either allow McQueen to evolve with the times or walk into the sunset and put on the headset for a newcomer much like Doc did for him. We receive a smarmy billionaire “fan” turned owner who knows nothing about the heart necessary to excel in sports beyond the business arena (Nathan Fillion‘s Sterling), a slew of familiar commentators predicting Lightning’s demise (Bob Costas and Darrell Waltrip) alongside the latest inclusion of a statistician to the team (Kerry Washington‘s Natalie Certain), and of course Jackson Storm’s cocky attitude getting to McQueen like Chick Hicks (voiced by Peterson here, Michael Keaton‘s absence is definitely felt) never could. It’s a lot to overcome and Lightning must do so without the help of his Radiator Springs family.

Cars 3 is a prolonged training session like the original Cars. Whereas that journey was mental (teamwork, appreciation, and respect), this one adds a level of physicality as far as McQueen getting up to speed. He had a community helping him see the error of his way then, but now it’s just Sterling’s trainer Cruz Ramirez (Cristela Alonzo). She’s “new school” with treadmills, yoga, and computerized readouts—things Lightning butts heads against because of a returning ego and history of success in the dirt with Doc (who returns via flashbacks despite Newman’s death in 2008). It should be a scenario where McQueen humbles himself to finally embrace Cruz’s ways. Because he never does and actually seeks out Doc’s male trainer Smokey (Chris Cooper) instead, it plays like misogyny.

I’d be lying if I said I was able to look past this underlying notion whether it was wittingly drawn or not. There are multiple examples of why—examples that would be construed as spoilers, so I’ll try to be vague. They’re mostly steeped in rhetoric and attitude making Cruz into the “other.” You could get away with it being “new school” versus “old” if McQueen was the only one with a problem, but he’s not. There’s an instance where she’s chewed out by Sterling to make it appear she was fired before Lightning is shown successfully standing up to him about the same topic. No one respects Cruz as a “racer” and that reality cannot be acknowledged without seeing her very clearly as a woman amongst men.

It’s a shame because there are some good lessons about aging, rebirth, and dignity here. But they’re difficult to appreciate when you’re constantly watching this woman belittled and dismissed due to bigoted preconceptions. Maybe that’s another lesson the filmmakers are trying to share? Maybe they believe that letting Lightning accept her is the true purpose here? If so, they’re doing it wrong. Not to give anything away, but her moment of finally being given the chance to show the world what she’s made of arrives with McQueen’s voice guiding her. She is the trainer who he couldn’t respect enough to listen to even once and the filmmakers decide he will ultimately be her savior? Rather than humble him to listen, she’s forced to listen to him for success.

So while the intent for gender equality is welcome, the execution subverts that goal. You cannot spend the movie yelling at Cruz for screwing up—when we know it’s Lightning with his head up his own butt—and not allow her the power to overcome. Instead McQueen never relinquishes his. He either wields it to keep her down with abusive rants and the breaking of a trophy she earned without contrition (his apology arrives via a joke that has the gall to mock her) or he wields it to allow her entrance into his world. There’s even an old school legend in Margo Martindale‘s Louise Nash who relays a story about how she took power back in the day, but Cruz must wait until it’s given to her.

So for all the gorgeous animation work (the glossy sheen that vaulted the series to new aesthetic heights is now tempered with an authentic matte texture of primer and carbon fiber), quality vocal performances from all involved, and exciting set pieces such as a demolition derby with fire and destruction, I can’t applaud the film. While the amount of callbacks (series-wide or from act one of this very film) and dialogue-based exposition already explained visually create a level of repetition that can be tedious, this sort of reinforcement is good for kids and can be ignored. Unfortunately, however, that process reinforces the idea that women need permission to walk through gates guarded by men. And that’s inexcusable enough to render this the worst Pixar to date.

Tell me Cars 3 doesn’t do anything Cars didn’t if you want and try to argue how I shouldn’t have a problem here because I didn’t when a male car helped another male car. You’re wrong because despite the blueprint being similar, the differences are enormous. The first let Doc and Radiator Springs open McQueen up to something inside himself he didn’t know he possessed. This one does that to Cruz, but she isn’t the main character. Her evolution becomes a byproduct of McQueen discovering his new lot in life. She’s evidence that McQueen has grown, not evidence of her own growth. That’s a reality that cannot simply be dismissed in this day and age. Cruz should have been provided respect, not a handout from the “true” hero.

Cars 3 is now in wide release.