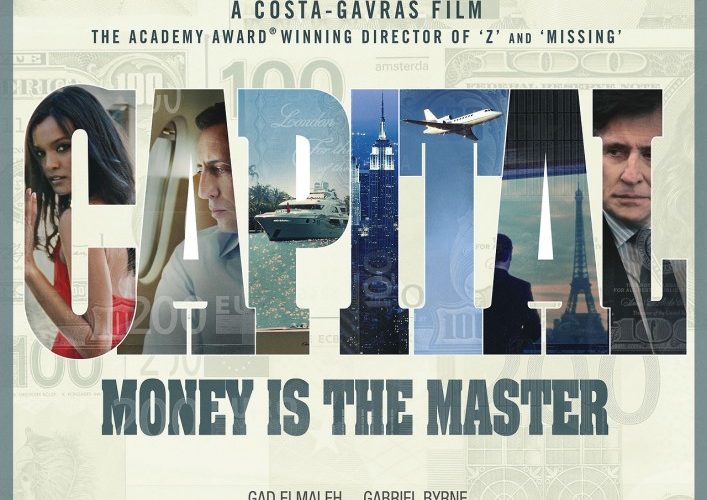 Capital, accomplished filmmaker Costa-Gavras‘ new film set within the world of corporate finance, is a fast-paced, cynical piece of entertainment that serves as a surprisingly simple criticism of our uneven system of dollars and cents.

The film opens with the CEO of Phenix, one of Europe’s largest banks, collapsing on a golf course. Marc Tourneil (Gad Elmaleh), the CEO’s heir apparent, then turns to the camera and explains to us what will happen next.

Soon enough, Marc is both the interim CEO of Phenix and a man with a large target on his back. There are the older and more corrupt members of the Phenix board, who watch Marc closely, confident they can control him and continue reaping their rewards. Then there’s Dittmar Rigule (Gabriel Byrne), one of the heads of an American hedge fund determined to have Marc and Phenix invest in some toxic properties for their own benefit. Add to that a neglected wife (Natacha Regnier) and a mysterious seductress (Liya Kebede), and our protagonist’s got a lifetime of problems happening all at once. This much conflict works well with Costa-Gavras’ famously brisk style of filmmaking. From boardroom to backroom we follow Marc, played with an amiable menace by Elmaleh, as he tries to stay one step ahead of all of those around him. Momentary breaks from the straightforward narrative – including Marc’s fantasies about saying what he really wants to say to these horrible people and his comments to the audience – help to pace the movie, restating the themes and motivations of this world.

That said, these motivations are frustratingly simple, for the most part. Those within the banking system are mostly diabolical, with little room for ambiguity or complexity. Any gray matter comes from Marc, who alternates between hero and antihero throughout. At the moment we are meant to root for him, convinced he’s on his way to becoming a sort-of Robin Hood of the CEOs, he gets distracted by the long legs of the seductress Nassim or the snake-oil smile of Byrne’s hedge fund master. Costa-Gavras has never been one to rely on any over-simplified opinion in his films, instead finding the cracks and imperfections in all sides of the argument, a fact that makes these black-hat banker characters a little hard to swallow. Thankfully, Elmaleh’s Marc encompasses all of these doubts, a seemingly moral man thrown into an immoral machine, making him capable of the absolute worst of sins.

While it’s clear our filmmaker is no fan of big banking, it is also clear he believes there are men and women within this system that are trapped between good and evil, fighting to get free. That we are given no real conclusion to this conceit makes Capital all the more tragic.

Capital is now in limited release.