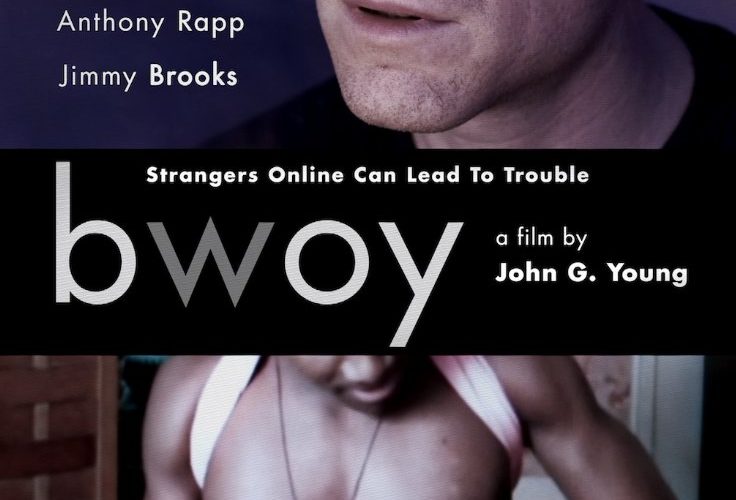 Review: ‘bwoy’ is a Rarity in Contemporary Queer Cinema

What will future generations make of the way in which dating moved from the world of the corporeal to the digital realm in the 21st century? Will the process of seduction by screen seem like an everyday thing to them? Will it reveal to them the birth of modernity or will it provide them with clues about why the century has been so marked by a lack of empathy? The true thing is they probably wouldn’t learn about it from the movies, because even though online dating is quite common, film hasn’t taken to it in the same way it took to meet-cutes or unrealistic happy endings.

Who can blame them? Would people prefer to see two guys meeting after they accidentally book the same rehearsal space and spill coffee over their white suits, or seeing them looking at their screens opening an app and waiting for someone to hit them up? It’s ironic that even if online dating has become one of the most popular way for men to meet other men and begin romantic relationships, it still is regarded as one of the most unromantic methods to meet people. “We’ll lie about how we met” is probably one of the most popular phrases on Grindr.

So what’s become business as usual for gay men in real life seems surreal and strange onscreen. In bwoy, director John G. Young might have very well made the film that best encompasses what online dating feels like. We see the eager Brad (Anthony Rapp) setting up a dating profile in which he describes himself in the ways he doesn’t dare to live. After noticing people don’t respond to his more wholesome approach, he reshapes himself as an aggressive, dominant male looking for a younger submissive man to tame. He also changes his location, rather than letting people know he lives in frigid Schenectady, he pretends to be visiting Jamaica. Lo and behold next he knows he has tons of messages from young Jamaican men who want to meet him. One of them catches his attention: the boyishly handsome Yenny (Jimmy Brooks) who on paper seems to be everything he dreamed of. The two begin texting, sharing intimate photographs, and slowly opening up to each other in a way they won’t allow themselves to do with anyone else.

We learn that Brad has just lost his little son and is still in the closet. We see his wife (De’Adre Aziza) sporadically, but understand his method for grieving has been to separate himself from the world. It’s only in the way Yenny calls him “daddy” and offers himself as a consolation for his loss that Brad seems to find any solace. But Yenny has issues of his own: living in Jamaica where homosexuality is still taboo, he reveals he’s afraid for his own life, living under such oppression. Will the two be able to help each other in truly transcendental ways?

Despite taking some outlandish turns towards its chaotic conclusion, bwoy is a rarity in contemporary queer cinema. It touches on the subject of loneliness in a way that’s as moving as it’s terrifying. It makes us wonder if connections established through digital means can help us navigate our emotional turmoil. Essentially it asks if we are capable of having real feeling for someone “unreal.” Young also touches on racial power dynamics as we see Brad exercising his best “white savior” behavior, while being suspicious of the motivations of a young black man from the third world. We see Brad wonder if he should give Yenny money, and there are equal parts self-satisfaction and regret when he decides to go through with a monetary transaction.

Rapp is sensational, embodying a man whose grief has left him incapable of empathy for anyone but himself. If the film sometimes puts him through heavy handed situations, he maneuvers them beautifully by committing himself to a performance in which he gets to be as ugly as he’s human. The issues raised in bwoy should prove worthy to those who crave for queer cinema that deals with more than coming of age and coming out. If the ultimate result isn’t precisely perfect, it should serve to announce Young as a voice we ought to get to listen to more often.

bwoy is now playing at the Museum of the Moving Image.