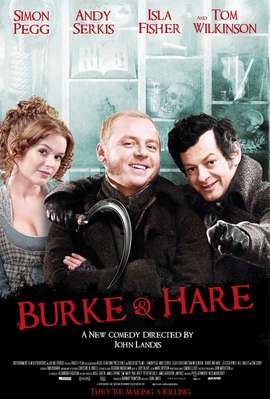 Burke and Hare is very reminiscent of this year’s The Ward, from John Carpenter. Both films come from filmmakers who are rightfully beloved, have delivered cult classics in the past but have been stuck in a rough patch for quite sometime. The Ward and Burke and Hare are far from the directors’ studio-mangled worst efforts, but it’s even further from their best.

There’s a competency to the technical side, again, like The Ward. Director John Landis has certainly made a comedy that’s more visually impressive than most. He makes the most of the low-budget, but the final result is disappointingly lifeless.

This is a film that should have been a comedic gold mine. A formula involving John Landis, Simon Pegg, Andy Serkis, Isla Fischer, Tom Wilkinson, Jessica Hynes and Tim Curry is full of potential, and that promise is squandered. Cast aside, a dark romantic comedy about moronic killers/medically hired hit men is a fun, deranged idea.

Instead of finding smart, clever humor in his characters – as he did in Trading Places, Coming to America and The Blues Brothers – Landis sticks to overly-broad situational comedy. When you have comedy pros like Pegg and most of the cast, it’s a hard pill to swallow that very little of the humor is found in more clever ways. That would have been acceptable as long as the situational gags worked, but most land with a thud. Not only because they’re not particularly funny – unless you’re one for broad humor – but also because, frankly, it’s difficult to care for either Burke and Hare. Landis once mastered turning despicable duos into charming underdog heroes. Sadly, Burke and Hare are anything but charming.

These are murderers with little charm, wit, or moral uncertainty to them. Since this is a comedy first and foremost, and not a drama, the moral complaint is a nagging nitpick. They’re average joes who turn to murdering old ladies and overweight men, and yet they show little remorse. If they recognized the horror of that idea or if Landis pushed it further, Burke and Hare could have been much more than a wacky and underwhelming comedy.