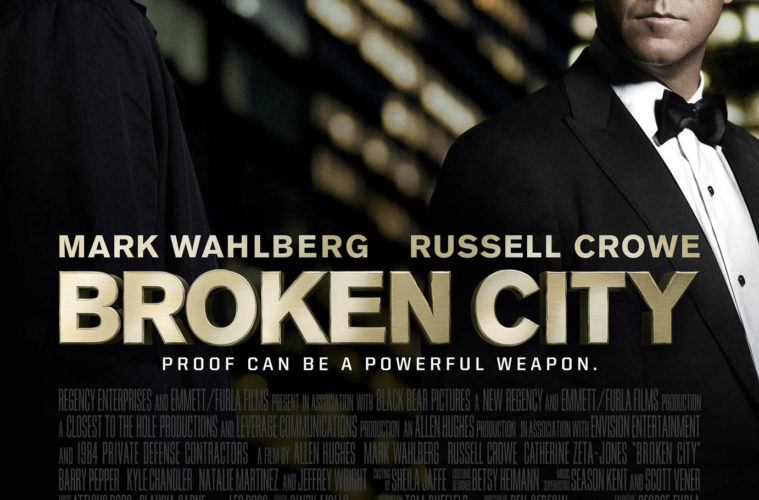 It would appear it is safe to call January the Month of Mark Wahlberg. Twelve months ago, the second-tier movie star provided the reliably entertaining thriller Contraband to mend our winter woes. This January, we get Broken City, the Allen Hughes-directed potboiler concerning a disgraced private eye named Billy Taggart (Marky Mark) and the corrupt mayor (Russell Crowe) who hires him for a job above his pay grade. The job in question is to identify the man sleeping with the mayor’s wife (Catherine Zeta-Jones).

We open on a flashback, Wahlberg’s former detective standing, stunned, with his gun smoking. We are not sure what has happened, but we know it can’t be good. Moments later, our man is freed of all charges, thanks to back-door wheeling and dealing by the mayor and the soon-to-be Police Commissioner, played by a very fun Jeffrey Wright. Taggart is free under one condition: that he turns in his badge and becomes a civilian.

Seven years later, Taggart is screenwriter Brian Tucker‘s version of a modern-day Raymond Chandler gumshoe: handsome, wise-cracking and rough around the edges. He’s even got a Girl Friday in sassy assistant Katy, played with a welcome amount of spunk by Alona Tal. The closer Taggart gets to finishing his job, the deeper he becomes entangled in something big and bad going on up in the mayor’s ivory tower.

Crowe clearly relishes the opportunity to play such a flamboyantly bad bad guy, and owns nearly every scene he’s a part of. Tucker’s script is equipped with many pulpy lines for the Aussie thespian to chew on, both smart and ridiculous, sometimes both.

This is the kind of B-movie Humphrey Bogart would have slept through in the 40’s. And while the political messages at play here – the film takes place in the heat of the mayoral election race – do not hit as well the film clearly thinks it does, it adds an extra level of spice to the proceedings. Barry Pepper (who’s been relatively quiet as of late) turns in a nice supporting performance as Jack Valliant, the fresh-faced candidate trying to take out the incumbent mayor. Kyle Chandler also shows up as Valliant’s campaign manager, and the two character actors share one of the more smartly-written, memorable scenes in the film.

And while every smart chess move the plot makes is met with an equally silly one, the ebbs and flows of the narrative are entertaining enough, helped greatly by a dynamite cast enjoying some low-brow roles. The weak link here is Zeta-Jones, who gets uncomfortable in the role of potential femme fatale.

Wahlberg, on the other hand, is tailor-made for this kind of ham-fisted, matinee role. He’s clearly having a good time here, going tit-for-tat with an old pro like Crowe. That’s just what this movie is: a good time. Nothing more, nothing less.