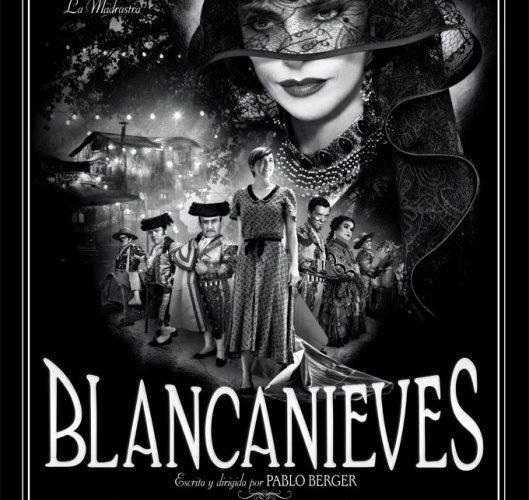 It appears Pablo Berger‘s silent, black and white interpretation of the Brothers’ Grimm‘s Snow White has become a casualty of its subject’s overexposure outside its home country of Spain. Nowhere more than America was Blancanieves pushed to the fringes after a 2012 Toronto International Film Festival debut and subsequent failure to win a spot in this year’s Oscars. One might have seen its parallels to The Artist as a glimpse of future success and yet here it is finally getting released after the underachieving box office takes of two more borrowing from the Grimms. Whether Snow White and the Huntsman going gritty or Mirror Mirror banking Tarsem‘s style could reach a crescendo, their lackluster appeal crippled the chances of the year’s best adaptation finding the appeal it deserved. Shifting the story made famous in 1937 by Walt Disney to 1920s Andalusia, Berger has crafted a romanticized vision of a culturally rich Seville. Homage to European silent films of the era, his magnificently authentic aesthetic includes a bit of a hitch in frame rate, high contrast imagery, and spotlight vignettes to direct our eye through the compositions. There are some beautiful transitions through scenes—especially those designating the passage of time; austere and sparsely decorated title cards depicting the characters’ words; and a rousing score of orchestral melody driving emotion and plot forward through its music. And with the newly injected occupations of our heroine’s parents as matador and flamenco respectively, a couple gorgeously sung pieces help bolster the visuals as well.

I’ve never read the original Grimm version of the tale, so I’m not sure how faithful Blancanieves is to the intricate details driving it. To me it seemed as though Berger infused a bit of their Cinderella as well with its evil stepmother stifling the life of a tragic child lost without an identity. Young Carmencita’s (Sofía Oria) birth shaped her trajectory as one insolent photographer’s flashbulb became the catalyst for horror upon horror. Her father, the enigmatic bullfighter Antonio Villalta (Daniel Giménez Cacho), lay paralyzed at the hospital courtesy of a malicious bull; her mother, Carmen de Triana (Inma Cuesta), lay dying from childbirth; and despite the attempts of her grandmother Doña Concha (Ángela Molina), Antonio could feel nothing but anger towards the baby for taking his beautiful wife away. In a rapid series of events, Villalta’s conniving nurse Encarna (Maribel Verdú) cons him for his hand in marriage, Carmencita reaches her Communion in the care of her grandmother, and another tragedy sends her packing to live imprisoned by her stepmother. This is where Snow White and Cinderella merge as the young girl’s insanely difficult chores find her with only one friend—a rooster Pepe—and the hope to rekindle a relationship with her father despite their reunion being forbidden. After a couple starts and stops on that front, Encarna’s selfish desire to wrestle away everything her husband earned throughout his career leads to attempted murder and the resulting convergence of an older, amnesia-stricken Carmen (Macarena García) and Los Enanitos Toreros. A troupe of six dwarf bullfighters, they welcome her in despite leader Jesusín’s (Emilio Gavira) reservations.

Everything you know and love about the fairy tale is included from the poisonous apple to the glass coffin, but how Berger has seamlessly worked it all into his Spanish drama is genius. Gone are all vestiges of magic and sorcery for a progression of events strongly rooted in realism. Encarna isn’t as much a witch as another more vulgar name that conveniently rhymes with the label; her vanity shattered by the popular lifestyle magazine Lecturas rather than a foreboding voice from a mirror. Instead of the dwarves being outcasts in the forest, they are more or less circus entertainers caught along the margins of decent society and perfectly placed to help Carmen reach the potential laid forth via her father’s famous footsteps. The story’s evil and cautious hope still remain. What makes Blancanieves so fresh despite its myriad familiarities is how well Berger has made it a personal tale of bittersweet redemption amidst the ubiquitous tropes we’ve all grown up learning at bedtime. I love how he has showcased Spain with its dance styles and stadium sized bullfighting exhibitions—from the wardrobes to the characterizations to the dangerous risk involved in unleashing wild beasts into the ring. He also finds a way to excise the heroic prince who comes out of nowhere to save the day and show young girls they should always dream of being rescued rather than strive to succeed on merit alone. Carmen never gives up, fighting until she no longer can to secretly learn her father’s trade and risk her life to save Jesusín when he’s in need.

She becomes one of the bullfighters—turning six into seven to align with Disney—and begins an unrequited love with their most compassionate member, Rafita (Sergio Dorado). Blancanieves moves forward realistically and without too much contrivance, beginning with tragedy and ultimately ending with it as well. The performances may be broad and therefore contrasting to the realism at play but it being a silent film forgives the overt cheesiness. Verdú is diabolically fun as the despicable antagonist; Cacho is equal parts unforgiving and compassionate depending on where we are in his evolution; and García exudes the innocent joy her mysterious bullfighter can’t hide once success hits. They inhabit this world perfectly, bringing a bygone era of Andalusia to life while also making a tired tale new again.