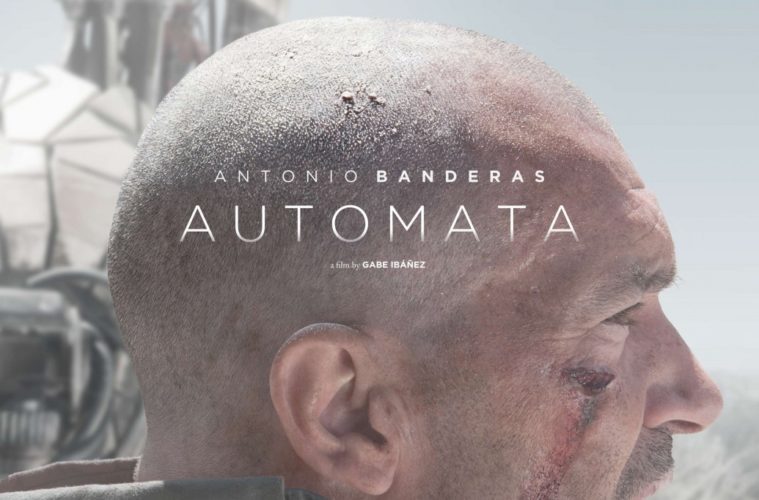 Automata, directed by Gabe Ibanez, does its damnedest to tackle those tried-and-true questions about artificial intelligence from a fresh angle. And with an impressively-layered lead performance from Antonio Banderas, as well as some densely-explored existential themes on humanity, the film hits the right notes some of the time. Unfortunately, the dialogue and the central narrative arc do not live up to the ideas present throughout.

In the future, 99.7% of Earth’s human population is gone. Only 21 million lost souls remain, protecting themselves from deadly radiation in a one final guarded metropolis. The walls of this city are built by robots – called Automata Pilgrim 7000s – who are also tasked to protect their humans. The robots are controlled by two protocols, preventing them to harm any living thing and alert themselves in any way. Of course, as we who’ve watched other sci-fi films know, protocols were meant to be manipulated. Banderas stars as the ridiculously-named Jacq Vaucan, a weary insurance agent for the Roc Corporation (the company responsible for the Pilgrim 7000s). At the start of the film, a seedy cop (Dylan McDermott) discovers a robot repairing itself. The discovery is met with mostly laughter at the company, but when Jacq looks into the report, it’s clear these robots are thinking on their own. But how?

While the initial world-building is impressive enough, the story remains extremely simple, never amounting to much more than that initial question. Save Jacq, the characters here are not as dynamic as the ideas presented. Where the first half does a lot (with what appears to be a rather small production budget) to dig into the themes and details that define who “we” are and why “we” operate, the second half varies between spare action set pieces and long discussions on what it means to be human that ultimately feel redundant. The second act of the film stalls a bit as well, detouring thanks to a woefully miscast Melanie Griffith, playing an exposition-laden scientist of sorts who spends most of her screen time restating the themes we already fully engaged in.

But when the film is focused, it mostly works. Javier Bardem voices the Blue Robot in the film’s over-long climax, finding an impressive blend of poetry and conviction in explaining why he and his robot kind are worth fighting for. It’s a poignant moment, in which Banderas’ Jacq confronts that universal fear of what cannot be explained. It’s these smaller, personal scenes that get at the heart of the matter, ultimately making Automata worthwhile. Sadly, the film spends too much time hammering home the same points instead of expanding upon them. Running at nearly an hour and 50 minutes, one wonders what a cleaner, punchier 90-minute film would have looked like.