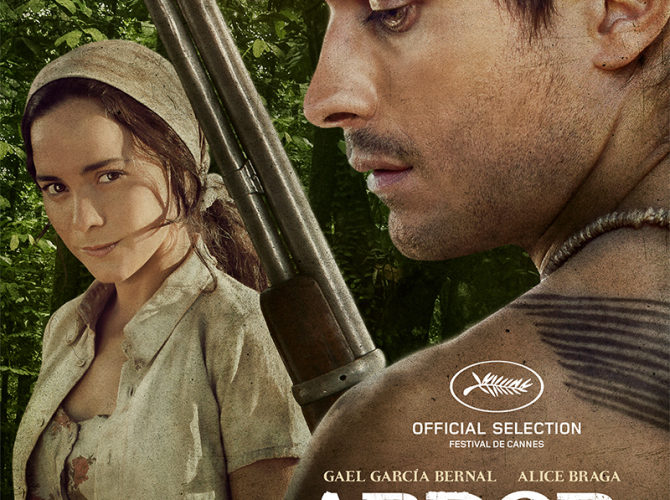 If you combine Blue Ruin’s lack of a clearly discernible story and exercise in genre with Jauja’s teases of magical realism and self-consciously mythic narrative, you will get something close to Ardor, Argentine director Pablo Fendrik’s Gael García Bernal-led western. The actor plays Kaí, an Amazan shaman who watches his tobacco-farming friend get killed and his partner, Jara (Lautaro Vilo), get shot, then sets out for revenge and the recovery the farmer’s daughter, Vania (Alice Braga). The narrative impetus behind the attack on Kaí’s camp is bare — Vania’s father doesn’t want to sell his land to deforesters — and perhaps gives it colonialist undertones similar to those in Jauja, albeit without the homage to The Searchers or self-conscious pictorialism and influence of landscape painting.

Ardor makes it colonialist allegory evident in that it begins with a title card informing us of a local myth about the inhabitants of the jungle of Paraná, who “perform rituals to evoke Beings from the river’s current who could help them in case of an invasion.” Sure enough, a jaguar appears in at least three crucial instances to aid Kaí and Vania, and while it attacks their enemies, it never hurts them. Similarly, we are treated to a small handful of autonomous shots of helicopters roving over the sea of trees below and a few sunsets to remind us of the beauty of Argentina. Argentina is a spiritual and mythic land, full of traditions that must be honored. Kaí affirms his affinity with the land is in his use of it: he knows how cooking a snake can help treat a wound; he uses tree bark as rolling paper and finds a plant to smoke; he climbs trees to retrieve their fruit; he makes weapons out of his surroundings; his knowledge of the land, vegetation, and wildlife around him is his edge.

Of course, this interpretation only stretches so far until the film’s genre roots start to muddle. Kaí, Jara, and Vania also rely on knives, guns, and even fire to thwart their attackers. The film depicts its skirmishes at length, so much so that to suggest Ardor isn’t (on some level) a work in the western or action genre seems increasingly misguided, which only makes its magical-realist elements feel out of place. Its anti-colonialist message lacks nuance, and the nativist elements of the film are always pushed to the sides by the less interesting narrative. On the other hand, these skirmishes are successfully executed, with changes in camera placement along the vertical axis and use of off-screen space being Fendrik’s preferred method of creating surprise or replicating short-sightedness / omniscience (low and high, respectively).

In other words, while the ingredients of a western are there, from civilization vs. nativist dialogue to tightly constructed action sequences, Ardor’s most noteworthy alteration is the change of scenery. Given the genre’s roots in American Exceptionalism, such a change is not without worth, but, by now, revisionist westerns have run their course and the genre has long been translated to other locales. In this respect, García Bernal is a strange choice for lead actor. John Wayne’s star image was constructed largely through westerns in which he embodied traditional American ideals, so much so that his mere presence was able to signal them (hence, Ford’s best films would place Wayne, a symbol more than an actor, into the West and amid ever more complicated contexts, e.g. The Searchers).

García Bernal is a Mexican actor who is known more as a great actor than a major, capital-S star, largely because he’s worked with directors from so many different countries and played characters of so many nationalities. Inserting him into this film as a Shaman asks us to take more on faith than we are prepared to. Even worse, despite the problem of Amazonian deforestation in present-day Argentina, Ardor is largely a star vehicle, devoid of the personalities and secondary and tertiary characters who would allow that problem to be addressed seriously rather than (arguably) being appropriated as background context. As such, Ardor is more Blue Ruin than Jauja: a strong exercise in genre, but one constricted by its chosen syntax and semantics rather than one that reconfigures and complicates them.