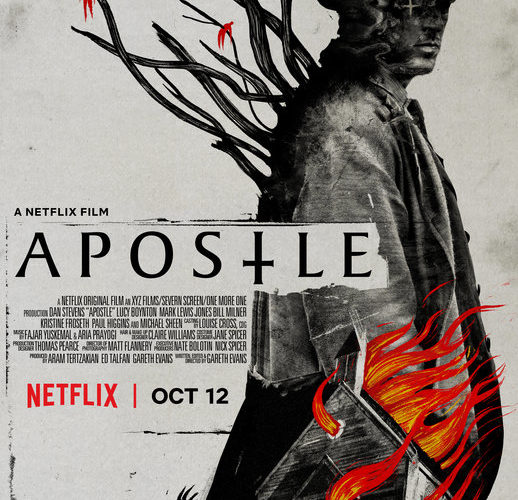 Review: ‘Apostle’ is a Tense Journey Enveloped in Lunacy

Coming off of the success of The Raid: Redemption and its sequel, The Raid 2, the anticipated path for Welsh director Gareth Evans may not have been a horror film by way of 70s cult thrillers. Yet on closer inspection of his bone-cracking Indonesian action saga, the signs are all there. Both Raid films have a seedy side, often caked in dirt and dust, with a sense of being stuck in the wrong territory, or becoming completely engulfed in an abject world. The violence extends into horror, and Evans plays with tension building toward the release of action quite naturally. With his latest work, Apostle, Evans lets his freak flag billow gloriously in the cinematic wind; leaning into the perverse nature of his work, he fixates on tension and dread to craft a compelling journey enveloped in lunacy.

Apostle follows Thomas Richardson (a jittery and excellent Dan Stevens) who, in 1905, must infiltrate a cult situated on a remote island to rescue his sister. Once within their midst, Richardson begins to uncover the scope of the cult’s deranged customs, propelling him toward a darkness unknown to man or God in his quest for liberation. Evans’ narrative formula here is simple, allowing the requisite setup to move swiftly, and thus meaning most of the film’s runtime is spent on the island. This is clearly by design, because once there, Apostle unfurls a series of demented developments over its two-hour runtime that keep you riveted.

Apostle is less a slow burn than a hike down a rock face, the angle intensifying until you plummet. Taking cues from a hybrid of both Raid films, Evans balances a confident pace to establish locale and character, while still ratcheting up tension and intrigue. From early on, there are moments which give the entire affair a palpable weight and menace, effectively creating an off-kilter atmosphere before the film breaks into full-on gonzo territory. These accents are punctuated by horrific imagery, as much as they are by spurts of perverse action.

The action in Apostle has a different sting to it. Without losing the kinetic frenzy of The Raid films, Evans creates action beats here that are focused on tension, with manipulations of the environment and specific movements central to their construction. The spatial geography of bodies and visual coherency are paramount, and the infrequency of violence makes it hit harder than in The Raid. Instead of the jaw-dropping spectacle of pencak silat, there is a teeth-gritting savagery on display here. Evans creates cruel worlds with a real sense of danger, and this instilled sensation of vulnerability for the audience comes alive most notably during these scenes. The way Evans manipulates bodies and their movements in the frame is always fascinating, like a mob of hands grabbing at someone, creating the sensation of ravenous zombies wracked with hunger.

This physicality extends to star Dan Stevens, whose body awareness is astounding throughout the film. Infused with twitches and ticks, his performance is dialed into a very specific frequency, and you can feel his muscles tense until it aches. Rivaling him is the dignity of Lucy Boynton, the sturdy menace of Michael Sheen, and the graceful innocence of Kristine Froseth (who is completely arresting). Each performance is textured, which keeps the chiaroscuro-infused imagery grounded in our realm, even as the world of Apostle ebbs toward the phantasmagoric.

Visually, from compositions to cutting, Evans balances a precision (slow focus pulls to hands or fine details, total coherency in action) with a roughness that gives Apostle its refined edge. His cinematic grammar melds the inventive melodies of an Evil Dead 2 with the elegant stillness of something like The Village, without losing his own specific language. Practical lights, candles, gas lamps, and lighters fill frames; all warm, but perhaps unreliable, casting flickering shadows, and unable to shed light on everything that lurks beyond.

Yet light is shed indeed, and Apostle contains some of the most indelible imagery put to screen in 2018: stuff dragged straight out of a sinner’s nightmares and torn from the pages of ancient, cursed books, coated in viscera and vines, and contorted with pain and suffering. With heads wrapped in wire and thorn, bodies splayed on barbarous torture devices, or strung up in bags, Apostle solidifies the age-old dictum that man is the cruelest (and strangest) animal. Yet it is all wrapped up with significance and fascinating lore, like the blood of fertility versus the blood of death, and how the purity of nature is corrupted by man. The abuse of animals and bodies, and the weaponization of faith and ideals. Here, right now, the lunatics are running the show, and Apostle speaks some grimy, batshit crazy truth.