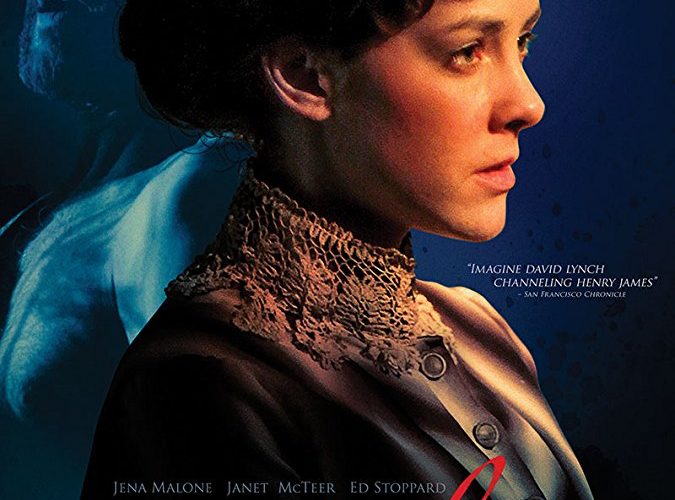 Midway through Angelica, a medium (played by a hammy, bug-eyed Janet McTeer) talks to Constance (Jena Malone) about the ghostly apparition plaguing her and her daughter Angelica at night. “I’m not a man,” she says. “Do not tell me what you know, or what you can prove. Tell me what you feel.” It’s one line out of many writer/director Mitchell Lichtenstein uses in his psychosexual Victorian-era ghost story to make his points about misogyny and sexual repression clear, although his blunt-force clarity ends up strangling away any sense of tension or intrigue. For a film dealing with the unknown of the supernatural, it wants viewers to know as much as possible about its subtext.

Before things started going bump in the night, Constance found herself living out a storybook romance. An orphan with no status or money to her name, she catches the eye of scientist Joseph Barton (Ed Stoppard), and the two soon fall in love and marry. Now living in Joseph’s house in London, Constance finds herself enjoying a life of domestic bliss and constant sex, but when she gets pregnant with Angelica things take a dark turn. After narrowly surviving childbirth, the doctor tells her that she mustn’t participate in any sexual activity from now on as it might kill her. “You pursue your own desires at your family’s expense,” one doctor tells her after a relapse with her husband leaves her bedridden.

With the doctor’s prescription, Lichtenstein – who adapted Arthur Phillips’ novel – provides a more literal example of the complicated relationship women found themselves forced into regarding sex. With her desires repressed, Constance becomes overly protective of Angelica, and when Joseph moves their daughter from sleeping in their bed to her own bedroom, Constance begins seeing visions of an amoebic spirit hovering over Angelica’s bed at night. And in case viewers don’t understand the ghost’s purpose, Lichtenstein gives it the shape of a man, has it leave behind a semen-like ectoplasm, and shows it sporting a massive erection.

The shift in tone from slow-building psychological tension to the sight of ghost boners doesn’t really work, for reasons that should be obvious. Lichtenstein prefers to keep one foot planted firmly in each tonal extreme, and the results are messy. It’s why McTeer’s appearance feels so strange, as her campy demeanor feels better suited to a different kind of film (or better yet, the film should have acclimated to her performance instead). Cinematographer Dick Pope keeps things looking nice and prestigious, while Malone does her best to define her role as more than just a woman going mad. Unfortunately, all of the good work is in service of a filmmaker who can’t get a firm control of his own material.

In fact, the only thing Lichtenstein does have a control on is his lack of subtlety, which does no favours for a horror film. There’s nothing ambiguous about Constance’s experience with the ghost haunting Angelica; it’s a manifestation of her anxieties and fears about the world her daughter will grow up into. But by stating this so plainly, the ghost is just a symbol that doesn’t pose any threat. The fun of a horror film involves anticipation and expectation. There’s no fun to be had when a film dictates its points to viewers. Fear of the supernatural ties directly into a fear of the unknown, but with no doubt surrounding the spiritual aspects going on, Angelica becomes a film more invested in its own ideas than executing them properly.