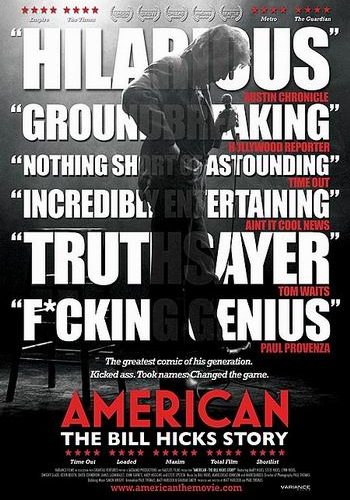 How does one document a legend, especially one as controversial and influential as comedian Bill Hicks? Throughout his career, he was labeled a rebel, a saint, someone who looked out for the best of America, and someone who was the embodiment of everything wrong with America. Instead of making the film an indictment or tribute to a comic that transcended telling jokes, directors Matt Harlock and Paul Thomas use their film American: The Bill Hicks Story to simply tell the story of the man himself.

There doesn’t seem to be anything revolutionary in the idea, but the truly riveting aspect is how the filmmakers tell the story through animating a wealth of photos accompanied with current voice over of the people who knew his story the best, including his family, his closest friends, and fellow comedians. This style, somewhere between cut-out dolls and Pixar movies, allows us to see a rough approximation of how the stories being told in voice over might have occurred. We see nary a talking head until the end of the film, allowing us to completely be enveloped in the film’s present.

This technique allows us to effectively see the life of Bill Hicks from 8mm footage of him as a baby through his breakthrough comedy special Bill Hicks: Revelations. We first meet Bill’s childhood friends Dwight Slade and Kevin Boothe looking roughly the same way they did when Bill himself met them, using their old, Kodak-based selves as avatars for their voice overs. It’s especially useful when weaving in archival footage of Bill and Dwight as young high school students putting on a two-man act for their classmates; it feels like a natural extension and not a situation of “man, Dwight looked a lot younger then.” The focus stays squarely on the story and the evolution of Hicks. We experience Hicks growing up as a person and a performer serendipitously, making this a must-see for comedy nerds and budding stand-us alike. There is footage of early sets where he set his sights on his parents as he would later on America, photos of him playing guitar in various bands (the entire soundtrack consists of his music) through lashing out at terrible crowds and the effect of the censorship on Late Nite with David Letterman. The impetus, the struggle, the downfall, and the resurrection are all covered, save for the conspicuously absent Texan comic Sam Kinison, who only gets shown in two photos despite the appearance of having more of an influence on Hicks than that.

At its heart, this is a film that tracks the journey of someone who had a dream and dared to live it. But, as the story nears its end, the tone takes a subtle but drastic shift. After learning about this man’s extraordinary journey, and how unsatisfying of a climax it had, it dares us to accomplish something equally as great, in comedy or just in our own lives. Hicks lived his dream; what are you doing about yours?

American: The Bill Hicks Story is now in limited release in NY/LA. Check here for other locations and expansion.