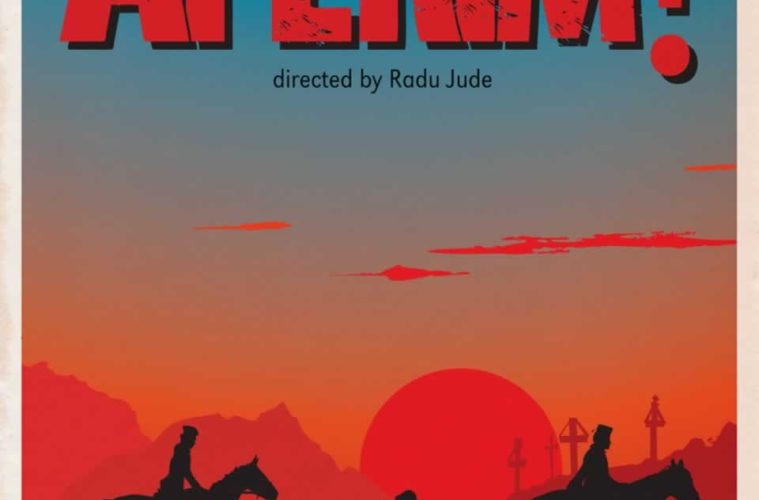 Leave it to a Romanian director to make a movie that best expresses the dangers of the dyed-in-the-wool mindset of modern America. Culled partly from historical documents, Aferim! is a twisted history lesson whose messages transcend its insular time period of 19th-century Romania. Its story concerns Constable Costandin (Teodor Corban) and his son, Ionita (Mihai Comanoiu), who chase after a wanted Gypsy slave for a large bounty offered by Boyar Iordache Cîndescu (Alexandru Dabija), a local noble. But even embedded in a timeline that’s centuries away, the story is strikingly relevant in showing how people maintain blinders in the face of inhumanity.

Directed by Radu Jude and shot in a stark black-and-white, Aferim! is at once playful and searingly serious with its snapshot of slavery and eye-for-eye justice. Jude has a wry, acidic wit not unlike Roy Andersson. But more often, the film’s roundabout musings on justice recall the insistence on absurdity of authors such as Heller and Kafka. Its action takes place in Wallachia circa 1835, a time between stations of enlightenment when the people of the world are holding fast to their beliefs for fear of the unknown. As Jude portrays it, it’s cruel to be kind to marginalized groups (e.g. Gypsy slaves), whose fate has been outlined for them the moment they were born.

The film is split about 70/30 into a journey to find and, then, return the slave. Carfin (Toma Cumin) is the name of the man — a Gypsy slave who fornicated with his master’s wife — they’re searching for. Unfortunately, there’s not much to be said for the actual character. He’s rather a physical symbol of what’s at stake during the time period in terms of political context and personal obligations for the characters. The law is unbinding for people in their class regardless of personal feelings.

Rather, much of Aferim! is devoted to dialogues about religion with a cast of motley characters they meet along the way. They’re a group of varied races and classes who have equally resolute hatreds of other groups. People who believe in other religions aren’t just different — they’re beasts who drink blood, as Jewish people are described by a passer-by. Superstition and hypocrisy reign supreme in this time period, and a group of people are dismissed in one box. Questions such as the ending or “unending” of the planet aren’t important. In this world, there’s conformity and there’s death.

These characters cling to racism like a security blanket for fear that their beliefs could be unjustified. Here, characters are not only unabashed in their excitement to sell slaves — they’re also selling them to the religious aristocracy who can’t contain their glee at the possibility of beating them, even as they’re preaching about religious relativism.

Though it’s written with novelistic density, Aferim!, stumbles in terms of its characterization, which seems mostly dictated by plot mandates rather than character. For instance, the constable speaks nearly entirely in aphorisms, coping with the realities in front of him via cultural jokes that are nearly always ill-timed.

He’s offensive, has the bad habit of calling nearly anyone below him in the social food chain “crows or hags,” and he has biases about the poor that stretch back so far in his family that he doesn’t even have reasons anymore. These characteristics are deeply illustrated in resonant ways, but they’re very much in service of lifting up a story of the inheritance of ideals, and, by the end, they feel like a narrative tool.

In contrast to the constable, his son feels very much like an audience surrogate in his approach of aggressive solemnity to the harsh world around him. He’s stuck moving back and forth between appeasing his father, and understanding the strange, irrational world he’s been born into. This is connected through a larger subtext of the constable trying to impart the responsibilities of a man of the time. Those responsibilities expectedly include repressing emotions about the injustices of the time and placing personal gain above everything else. Comparisons to last year’s travelogue of inhumanity, Hard to Be a God, are inevitable, and while Aferim! certainly has less actual shit, it’s every bit as grimy. But unlike Hard to Be a God, this isn’t even a world that raises those with knowledge.

It’s easier to live with ignorance, but those who succeed have done so since birth. These characters are aware of their smallness. The constable’s greatest show of emotion doesn’t come with some grand revelation, but rather when he’s staring at a campfire and begins reflecting on his place in the world. He can’t help but cry at his tininess.

Jude won the Golden Bear at the Berlin International Film Festival, and while Aferim! doesn’t totally work on a dramatic level, its compositions are absolutely worth praise. The compositions here are stunning long takes with a framing that places the characters between nature in terms of both the space of the screen as well as the foreground and background. In an early long take of sloped hills, the two characters look like shadow puppetry traveling up from a side isometric view, while another, later shot finds a geometrically nuanced way to place herds so they intersect with the travelers.

Notwithstanding a struggle with telling stories that stand alone from its period context, this is nonetheless a moving document of a time period that isn’t often exposed, and especially not with such a cutting modern eye towards the realities of the time. Strikingly shot and politically rich, Aferim! feels important, but too often it also feels like a fiery lecture inflected with moments of poetic grace.

Aferim! is now in select theaters and on VOD.