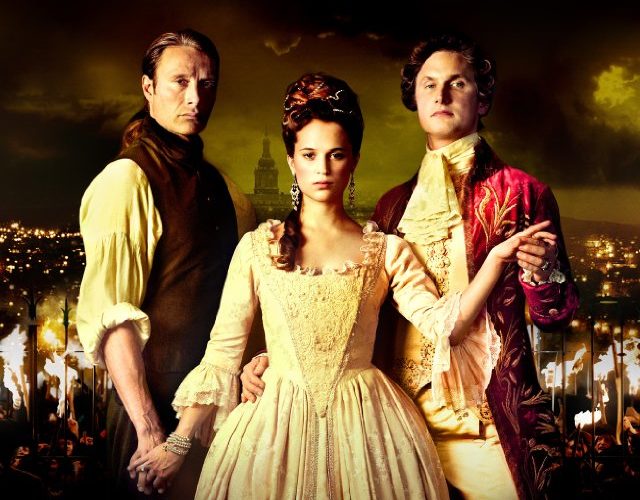 I would not have pegged the story of the Enlightenment spreading through Denmark as such a treacherous, juicy and entertaining one. Nikolaj Arcel’s A Royal Affair is smart enough to know which parts of that story to focus on and which to leave out. Light on history but heavy on elegance, A Royal Affair is a worthy film filled with lush imagery and riveting performances that does a proficient job at adapting such a story. The story is told via voiceover by our heroine, Queen Caroline Mathilde (Alicia Vikander). Caroline’s husband, the King Christian VII (played manically and deftly childlike by Mikkel Boe Folsgaard) is mentally ill. He often behaves rashly without consequence, speaks nonsense to his cabinet members, frequents brothels, and throws fits in public. Suffice it to say he is quite ill fitted to be king.

Caroline has no illusions about her husband’s character and practically gives up on any notion of love or connection from the moment they meet. Lucky for her, Christian spends most his time at brothels and makes up excuses not to see her — it’s a mutually loveless marriage. Her life changes when doctor Johann Struensee, (played by the incomparably expressive Mads Mikkelsen) is hired to be Christian’s personal physician. Struensee has got it all – compassion, empathy, dance moves and looks to boot. He’s basically everything Christian is not.

Struensee and Caroline get awfully flirtatious during this time and one day he secretly sends her Enlightenment treaties he’s published and that pretty much seals the deal. They proceed to sneak behind the king’s back and have incredible sex, seemingly without consequence — until she has his baby. The stretch of the movie where they fall in love teeters on silliness and soap opera like but it’s done with enough tension and flair that it gets a pass, mostly thanks to Mikkelsen’s convincing, sincere performance. The most glaring flaw would is the way Arcel treats the politics. The Enlightenment was no doubt a necessary reaction to what was going on at the time, but it oversimplifies the movement as simply “good” and church and tradition as the “bad.” A lot of this has to do with the way Struensee is portrayed which borders on glorification. Seeing Struensee is in his quarters losing sleep toiling away trying to deliver more cabinet orders, or at the very least stressing out about this affair he’s having with his boss’s wife, could have gone a long way.

This could have been a treasure trove for psychological character complexity, but that would have been a different movie. The lack of complexity would be more egregious if the movie this chooses to be wasn’t one that was so easy to watch. At 137 minutes, this feels like a breeze. There’s plenty of like about A Royal Affair, especially if you desire romantic period pieces, forbidden love, trashy romance novels, serious actors in costume or all of the above.